The Rest of the 1/72 Austrians

I had posted the Austrian line infantry regiments earlier.  The rest of the army took longer to paint/
The Austrian guns and crew are, like the Prussians, from the Zvezda Charles XII pack. Everything about them is wrong, so why do I like them so much?

The Austrian army gets two irregular infantry units. These are from HaT's SYW Austrian infantry in action. I just cut down the tricorne hats to look like Grenzer shakos. These are the Warasdiner-Creutzer Grenzer in white and the Slavonisch-Brooder Grenzer in brown. 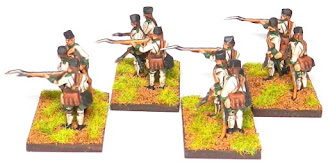 These grenadiers are all from HaT. I painted them as the Deutschmeister grenadiers.

The three regiments of cuirassiers are all HaT's Napoleonic Austrian cuirassiers with hat swaps. The horse furniture is not quite correct, but it will do. The regiments are Serbelloni, Gelhay, and Alt Modena Cuirassiers. 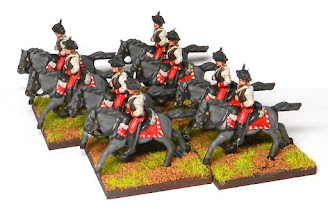 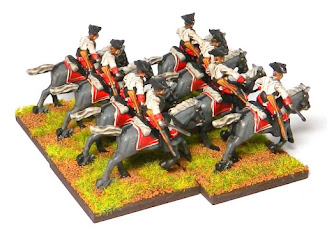 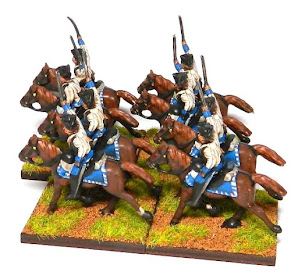 The dragoons are from HaT's Napoleonic Prussian dragoons with head swaps. The regiments here are Sachsen-Gotha and Porporati Dragoons. 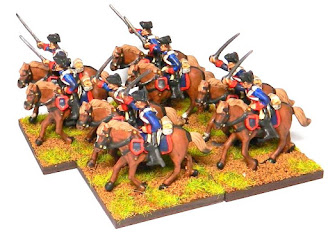 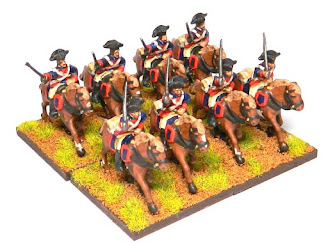 Finally, what's an Austrian army without hussars? These are HaT's Napoleonic Prussian hussars, unconverted. The regiments are the Dessewffy and Kaiser Franz I Hussars.

With these figures done, I have the complete Austrian force for Kolin. This army contains 254 foot, 57 horse, and five guns.

This was another very inexpensive army, running me under $120. It was actually fun to just slap some paint on cheap figures and not worry about getting every detail just right. I plan on playing Maurice games with my children, and I won't feel bad if the paint gets chipped or figures get broken.

A long time ago, I bought some 10mm buildings from Old Glory's line. I had thought of using them with my 15mm Napoleonic figures, but the buildings were much bigger than I had expected. I primed them, thought about painting them, and set them aside.
Last week I broke them out, reprimed (white this time), and gave them a quick paint job. I applied the dip, dullcoted, and drybrushed. I'm pretty happy with how these turned out, and they actually match up well with the 1/72 figures that are currently on my table. 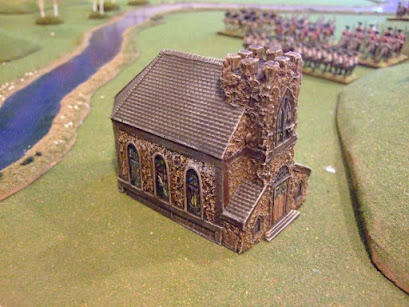 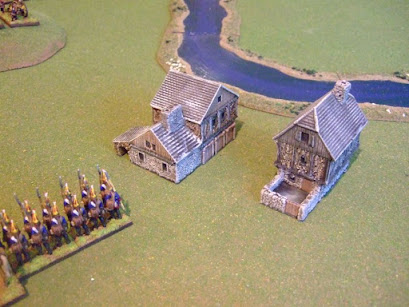 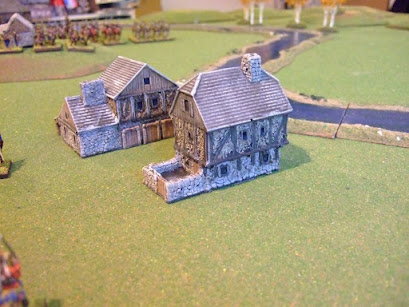 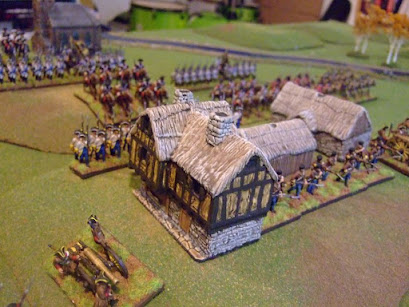 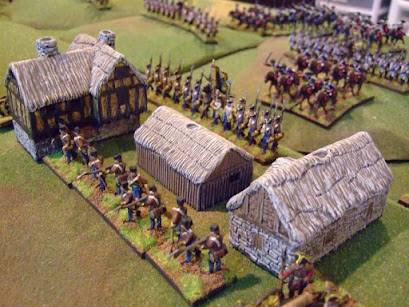 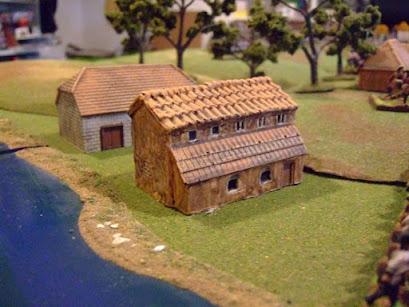 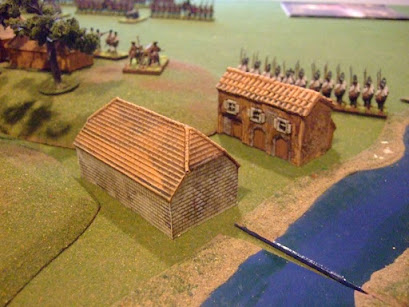 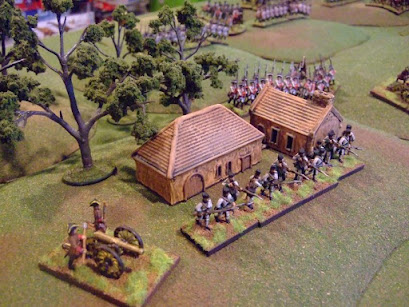 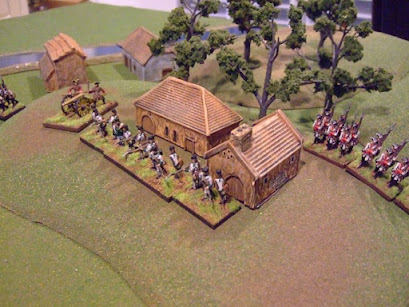 The Rest of the 1/72 Prussians

I have had these figures set up on the table for the past few weeks, and it occurred to me that I had never photographed them!
Frederick the Great is a simple conversion from an Italeri Napoleon figure. I just swapped Napoleon's bicorne for a Prussian tricorne. 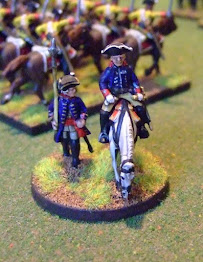 I had trouble finding Seven Years War artillery sets in 1/72 plastic. I thought American Revolutionary War crews would do, but the figures I saw were all very uninspiring. Instead I reached back to the army of Charles XII of Sweden. Zvezda does a beautiful set, and these looked like proper SYW guns to me. I know the uniform is not exactly right, but the spirit of this whole project was "good enough." 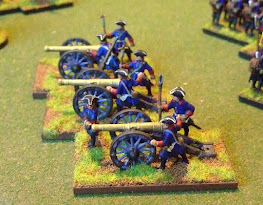 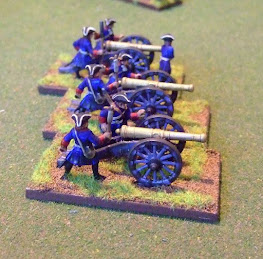 More HaT Industries figures provided the two battalions of grenadier garde for my army. All the HaT figures come without hats, leaving the gamer to choose between musketeer tricorns, fusilier caps, and grenadier miters. 40 of each are provided in the box. 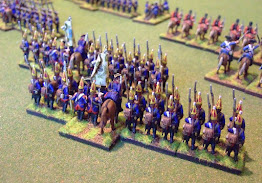 Seven Years War cavalry is also very hard to come by. Revell did a couple of sets, but they are long out of print. I thought HaT's 1806 Prussian hussars could easily go back in time 50 years. These are the Zieten and Seydlitz Hussars. 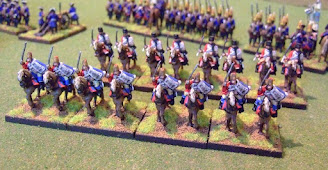 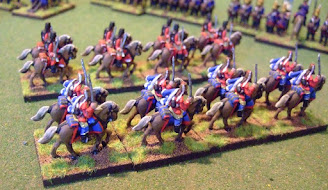 The Prussian dragoons also required me to find Napoleonic figures and dragoon them into service in the previous century. These are 1806 Prussian Dragoons from HaT. I cut off their bicorns and replaced them with extra tricornes from the infantry packs. These are the Meinicke Dragoons. 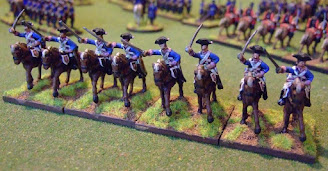 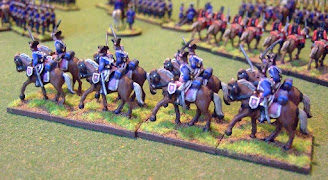 I did another hat switch for the Baron von Schönaich and Prinz von Preußen Cuirassiers, starting with HaT's Napoleonic Austrian cuirassiers. 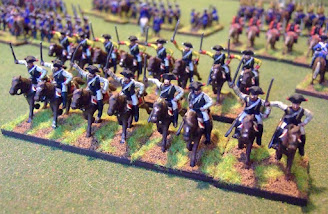 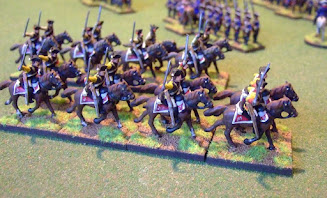 And that, my friends, is that. I have enough Prussian figures painted to play the Kolin scenario for Sam Mustafa's "Maurice." I will probably add to the army at some point, but for now I am calling this project complete.
All told, this army contains 257 foot, 48 horse, and 5 guns. I spent $103 on the figures and another $25 on Litko bases. Now I just need my buddies to venture over for a game!
Posted by Scott MacPhee at 8:53 PM 7 comments:

These figures are all soft plastics from HaT Industries. I wanted a quick project that I could work on while my kids did their schoolwork, and these fit the bill. I gave everything a "good enough" block paint job, stained them with Minwax Polyshades Tudor Satin, and based them up. 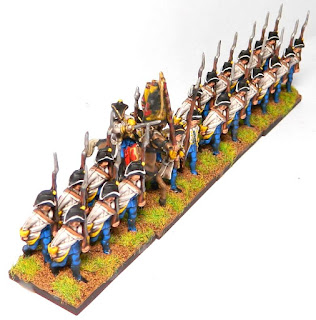 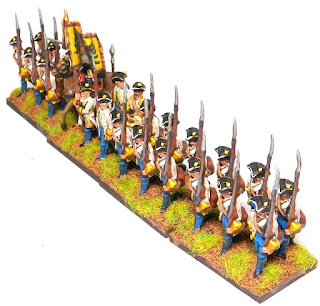 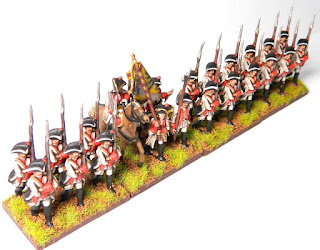 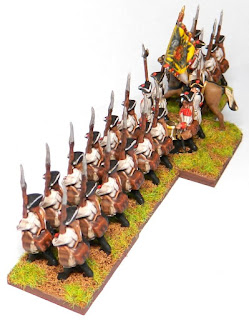 I wish the soft plastic manufacturers had made packs like this long ago! The marching infantry boxes have just two poses, and the result is useable wargaming figures. I like these figures so much that I will sell off the 15mm and 25mm lead I had collected.
Posted by Scott MacPhee at 12:26 PM 17 comments:
Older Posts Home
Subscribe to: Posts (Atom)