This was an interesting year.  I took on two large commissions, caught fire on my own projects this summer, then saw my painting grind to a halt when I went back to work full time.

I started the year with a gigantic commission, a complete Commands and Colors Russian Napoleonic army for Glenn Drover.  84 horse, 220 foot, and 10 guns rolled through my painting station between January and June.  Then I spent the rest of June on another commission, also for Glenn: 205 AWI foot figures.

I had taken a few little breaks in there to work on some figures for myself, mostly to clear my head and regain my spirit.

Starting in July, I turned to my own figures exclusively.  I painted 28mm AWI British, 28mm ACW, and got started on a few 15mm figures.

Then at the end of August, I went back to my day job.  This year's teaching schedule is the most challenging I have ever had.  I took on two new classes (well, new to me): AP U.S. History and College Prep Ancient Literature.  I started the year with 176 students in six sections, although those numbers are down a bit now.  And because my school does not have a classroom for me, I have been teaching in the cafeteria.

Between preparing lessons, writing materials, and correcting essays, I have been working between 60 and 70 hours a week.  I get up at 5:30 AM, get myself and the kids ready, teach all day, pick up the kids, make dinner, get the kids bathed and to bed, correct essays and write materials, and stumble to bed around 10:30 PM.

That, unfortunately, leaves little time to paint.  Over the last four months of the year, I painted 50 28mm figures, 38 15mm figures, and 84 1/72 figures.  Ugh.  And those 1/72 figures got just the roughest of rough paint jobs.  That, my friends, is a painting drought.

It was accompanied by a gaming drought.  I like to get together with my friends and push lead around in my free time.  The only problem is that I have not had any free time.  From gaming once a month, I went to playing NO games between September and now.

Here is what I managed to complete this year:

Under the Analogue Hobbies Scoring System, that makes for 5,456 points of painted figures this year.  About 5,000 of those points came before August 15th.

I plan to do what I always do when I hit a painting drought: work on some 15mm ACW.  I received one large order just before the holidays, and I have another coming.  Do I really need more 15mm ACW?  No, not really.  But I do like to paint them.

I would also like to add to my 15mm Napoleonics, my 15mm ancients, and my 28mm ACW armies.  Chain of Command has definitely piqued my interest in playing some 28mm WWII games.

But my biggest goal for the new year is to play more games.  It won't be easy.  I don't see my work schedule getting any easier, especially since I will be taking classes this summer.  My wife and I have a third child on the way, due in March.  And my five year old and two year old require pretty constant attention.  So this may the latest in an annual tradition of failed goals.

Here is the complement to my 1:72 scale Trojan figures: the Achaeans who besieged and captured Troy.  Figures are all soft plastic from Caesar Miniatures.  Some of the poses are not to my liking, and one of the weapons broke during sealing(!), but the overall effect on the table should be pretty good. 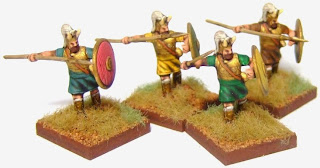 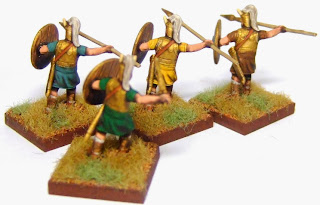 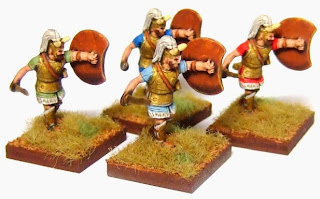 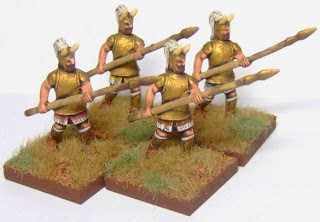 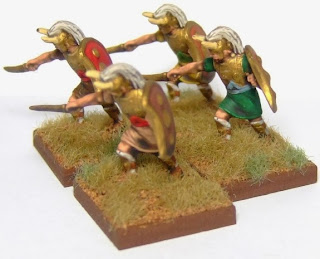 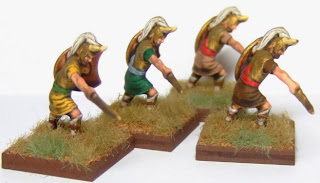 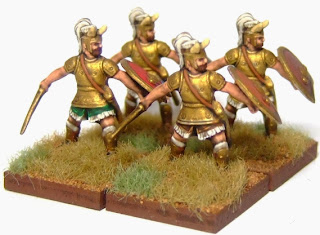 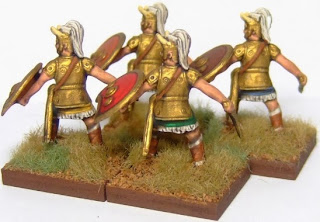 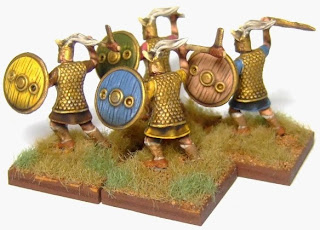