Jon and Kevin joined me on Sunday for the grand reopening of my gaming palace.  My mother in law had emergency surgery in early July, and she stayed in the palace while she was recuperating.  Now that she is back at her own house, gaming can resume!  We played Aspern-Essling with Age of Eagles rules.

Kevin commanded the defending French: Aspern on top, Essling on the bottom.  We gave each village a defensive bonus of 2.

A French corps defended Aspern.  The paper buildings are from Roman Seas. 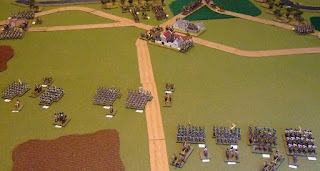 Jon commanded the Austrians closing on Essling.  He had eight infantry brigades, two cavalry brigades, and five batteries.  The reserve corps (2 brigades on grenadiers and two brigades of elite cavalry) was not immediately available. 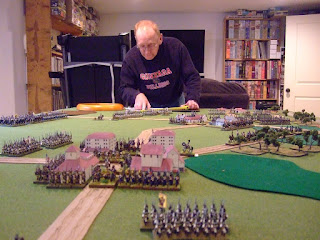 We were a little rusty on the rules, but everything came back to us. Age of Eagles definitely has that big battle feel. 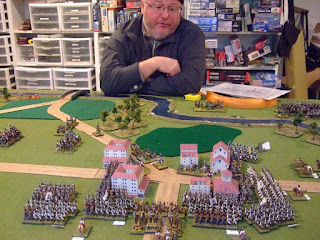 Kevin's French laughed off my almost completely ineffective musketry.  I brought up my batteries to point blank range, but they too had no effect.  Time for bayonets! 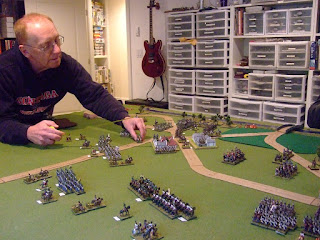 Jon delayed his center's advance long enough to press the French right flank behind Essling.  Kevin moved up his cavalry reserve to cover the space between the towns. 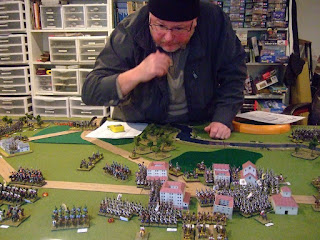 With the help of incredibly high dice rolls, my Austrians were able to push Kevin's French out of Essling.  I would love to say it was my brilliant generalship, but I rolled something like 10, 9, 10, 8, 10, 9, and 10.  Ares smiled on the Austrians today. 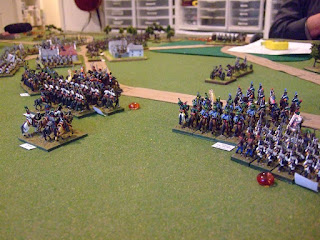 Kevin's brigade of hussars charged the Austrian cuirassiers and hussars, pushed them back, and delayed the Austrian reserve corps for over an hour!  The hussars lost a few stands, but the survivors should be promoted to the guard! 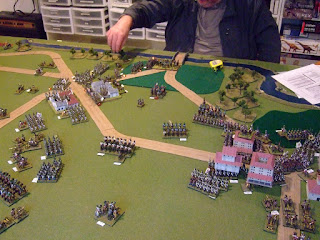 After three hours of gaming (two and a half hours of game time), I had taken 3/4 of Aspern, and Jon had taken half of Essling.  Kevin was reeling, and he still had two more turns until his reinforcements would arrive.  We took a lunch break at a nearby pub, got sucked into a trivia game, and had to put of the conclusion until next weekend.
Posted by Scott MacPhee at 9:45 AM