Today I finished basing these, and I am happy to be able to share some photos with you.

I had painted most of these figures last week, but I was a fusilier shy (broken musket), and I wanted to add elite companies, so I spent a few more days at the painting bench. I know French line infantry of this period did not have integral voltiguer companies, but I want to be able to use these for other periods.

I honestly don't know how the historical wargaming world is not going crazy over these figures. If these are not the best sculpts I've ever seen, they are close. All the detail is there, and it is in sharp relief to ease painting. The poses are natural and they work well as a unit. The proportions are outstanding. I have nothing bad to say about these figures, and I hope sculptor Alan Marsh continues to produce miniatures of this quality.

If it reads like I'm gushing over these figures, well, they're just that good! 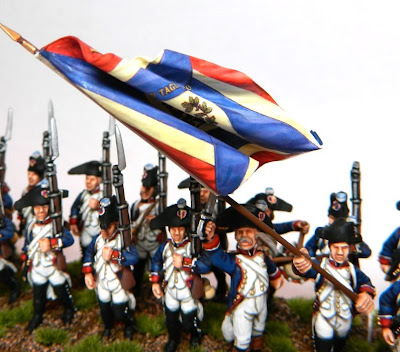 GMB Designs makes some beautiful flags for the Wars of the French Revolution. I've tried almost all the flag manufacturers, and GMB is still my favorite. 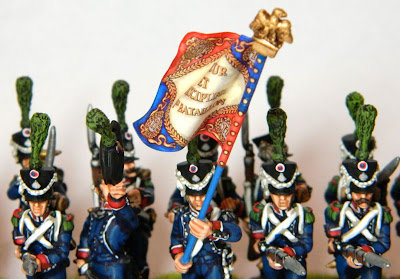 When I ordered my WFR flags, I snuck in a few for other projects. Here are the Front Rank legere from a couple posts back with a shiny new flag.
Posted by Scott MacPhee at 3:46 PM 10 comments:

I've finished painting the figures, but I haven't started basing yet. I'm waiting on a flag from GMB before I base these. 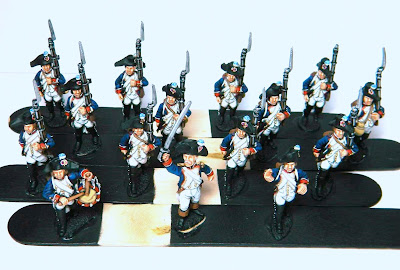 A full review will follow.
Posted by Scott MacPhee at 2:36 PM 7 comments:

Here are the first figures I've painted in a looong time. 2011 is not going to be a very productive year for me.

French Legere Chasseurs
I bought these figures from my friend Wally before he died. He had planned a big Napoleonic project that he never quite got started. The figures had all been primed white, and many of them had an unfinished block paint job.
Rather than strip them, I just sprayed primer right over the existing paint jobs. Wally was a world class modeler, and he had put a very thin coat of paint on these, so they took another coat without losing much detail.

I had planned to put a very basic paint job on these figures, but as usual, once I started, I could not hold back. I gave these the full treatment everywhere but their hair, which only got black shading. 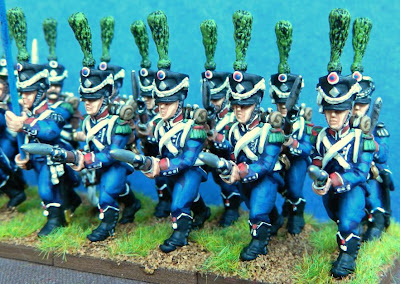 Regular readers will know that I prefer march attack poses for my infantry, but Wally had ordered advancing poses. It was a challenge to fit the figures onto their bases, and I doubt they will ever be able to form a tight march column. 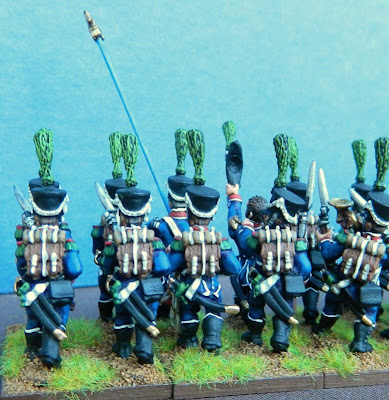 I was going to just slap on a flag from Warflag.com, but now that I spent a week on this battalion, I will order a flag from GMB. I just couldn't wait to post some finished figures on my blog. It has been a long time since I had anything to show.
Posted by Scott MacPhee at 6:38 PM 7 comments:
Newer Posts Older Posts Home
Subscribe to: Posts (Atom)