It was a quiet year on the blog, but a productive year at the painting desk.  I had a busy year away from the hobby, with a change in career and a new baby.

Although I managed only 20 posts this year, I did finish an impressive amount of figures.

15mm Ancient Greeks, 72 hoplites (with a few hundred more getting close to the finish line).

Almost all of my painting time was taken up with my 15mm ACW project.  I cranked out my entire Confederate army and made good progress on my Union troops.

I am surprised that I broke 100 28mm figures this year.  It seemed like I was only painting 15mm, but a few side projects in the larger scale helped break the monotony.  My total Analogue Hoobies Scoring System point for the year were only 4,327, a drop from last year, but the quality of my painting was very high.  I enjoyed my hobby more this year than I have for quite a while.

In 2015 I hope to finish my Greek hoplite army then finish a Persian army for them to fight.  I also plan to finish my ACW Union army.  After that, I may return to Napoleonics for a while.

I finished these 48 hoplites earlier this week.  Once all 400 are done, I will start basing.  If the shield patterns look familiar, it's because I copied some of LBMS's excellent transfers, painting them freehand. 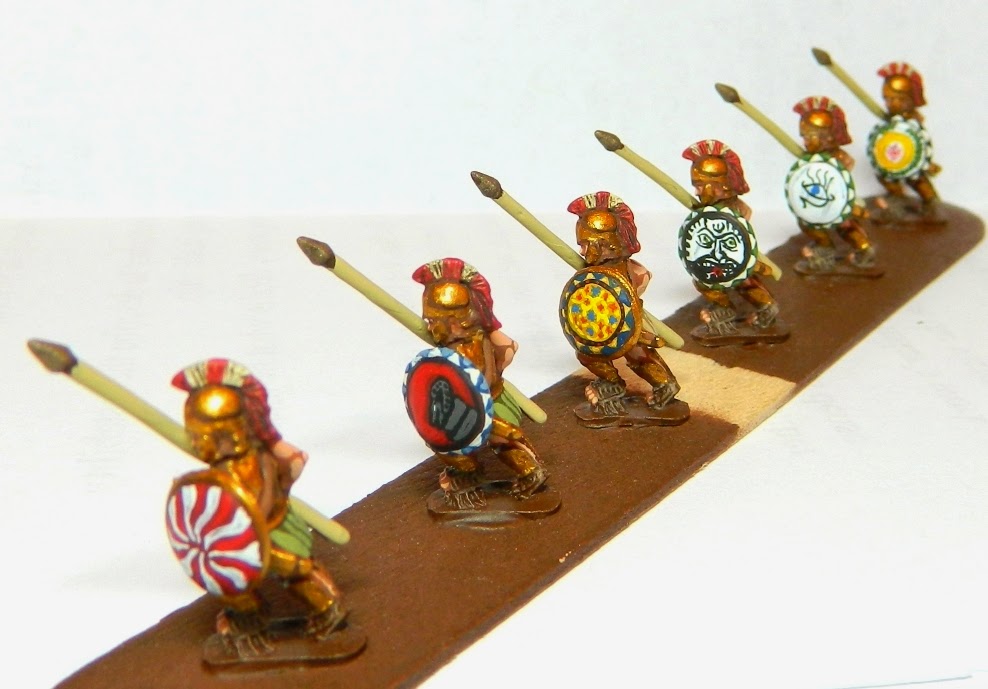 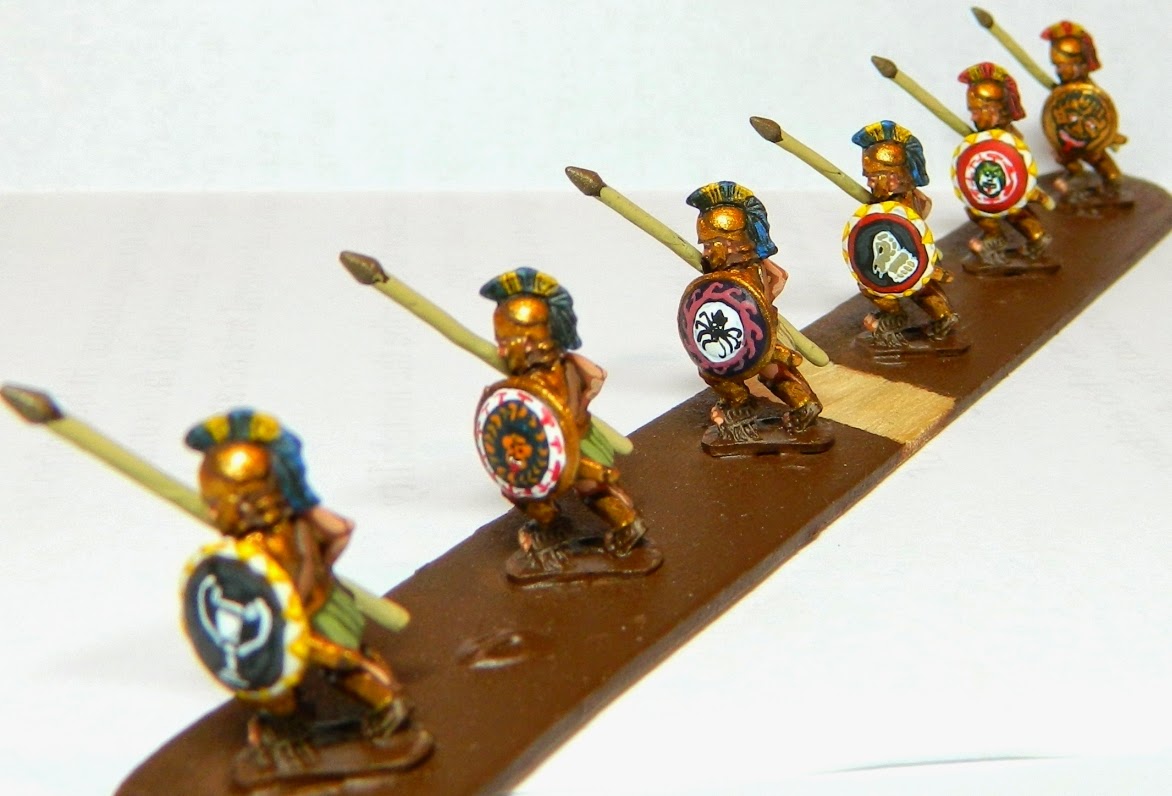 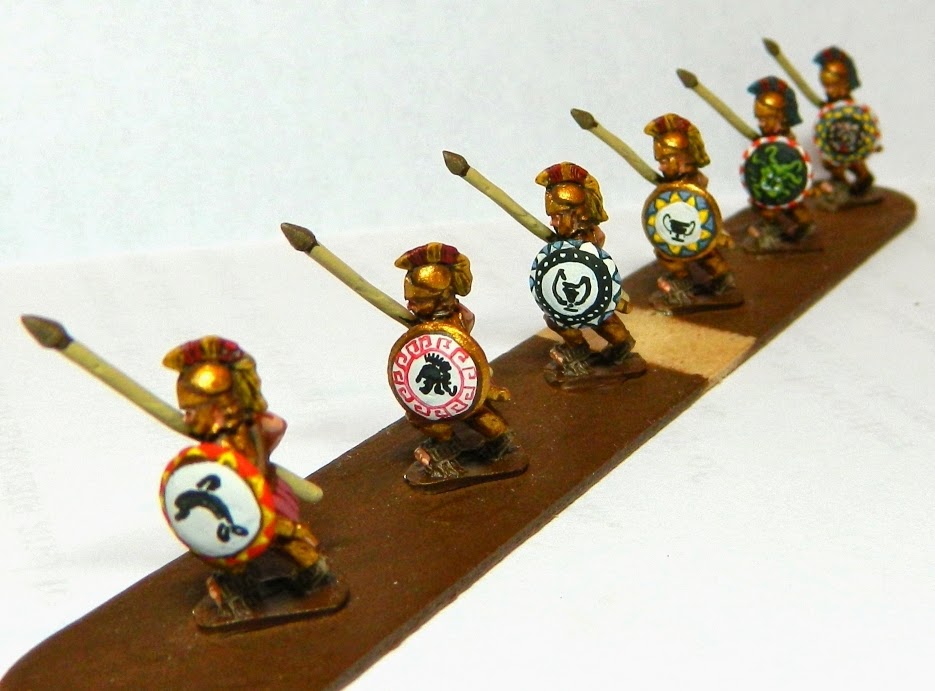 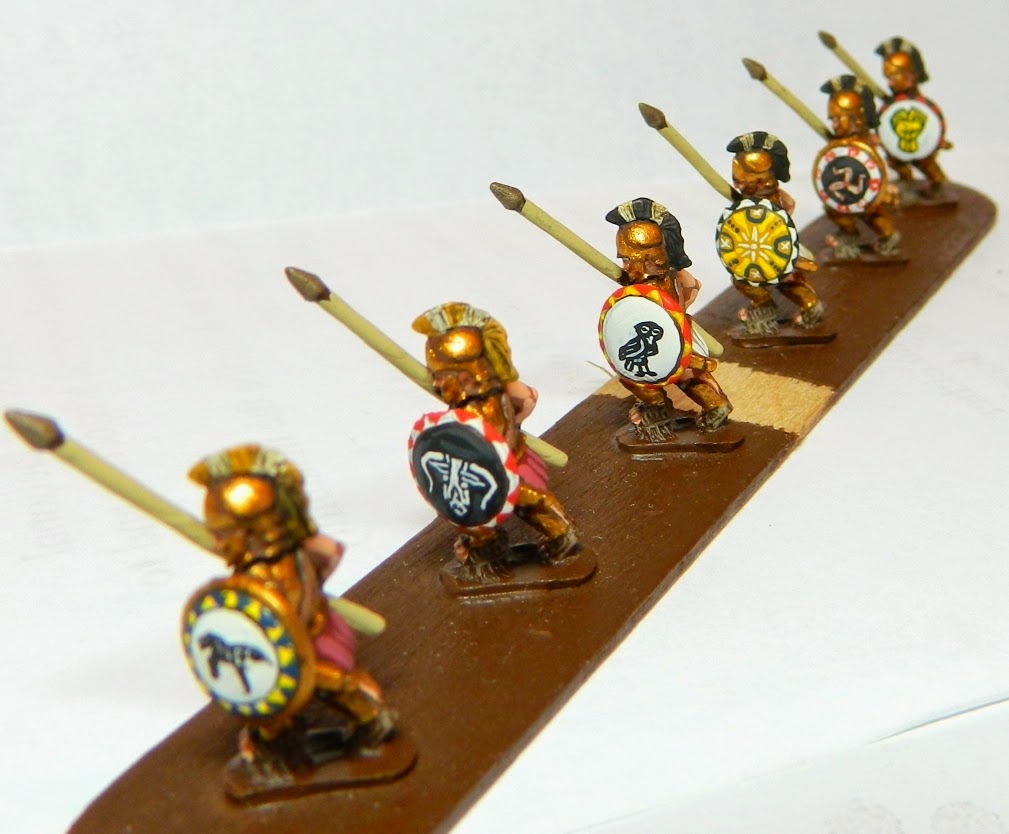 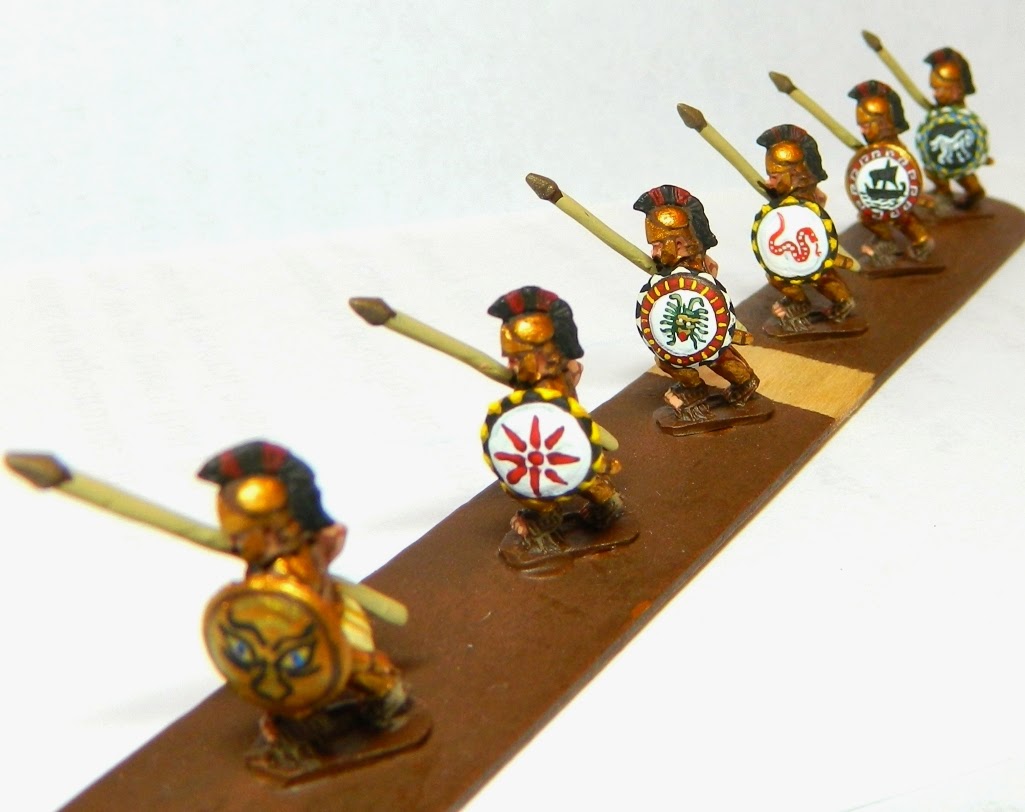 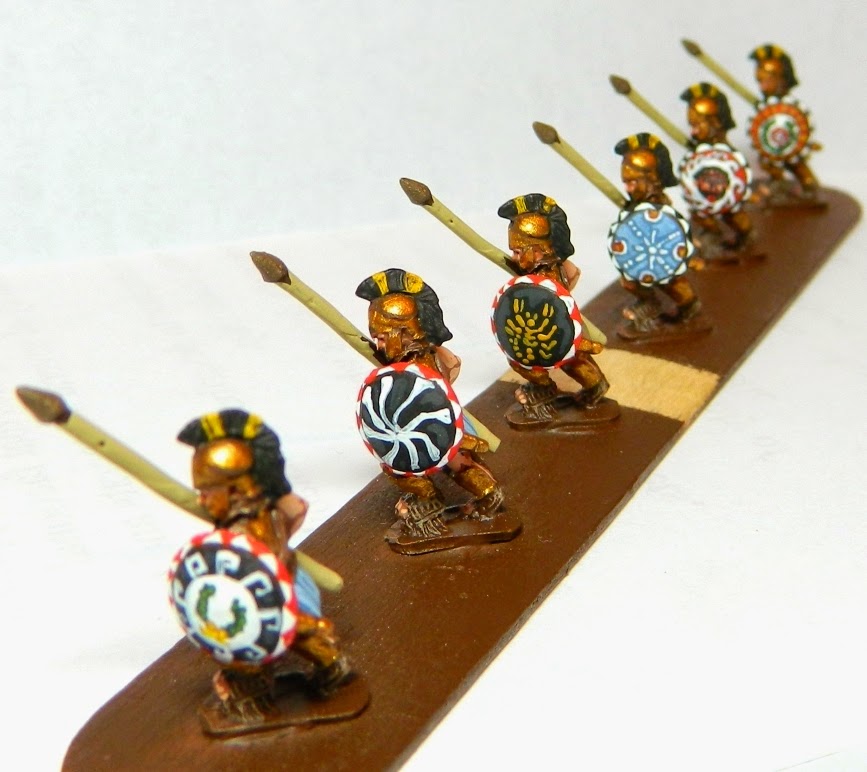 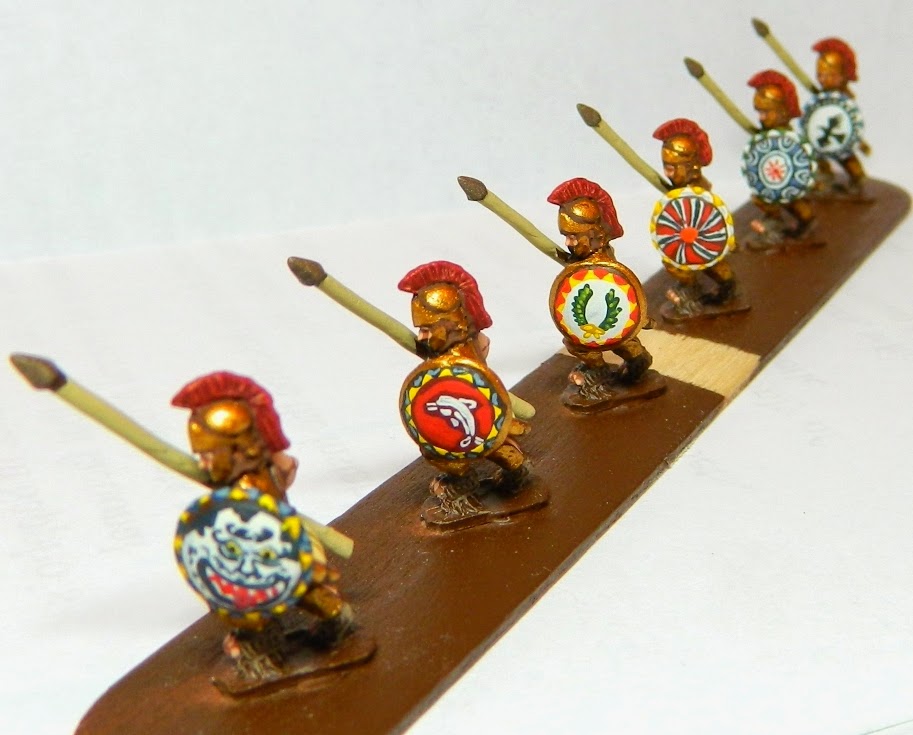 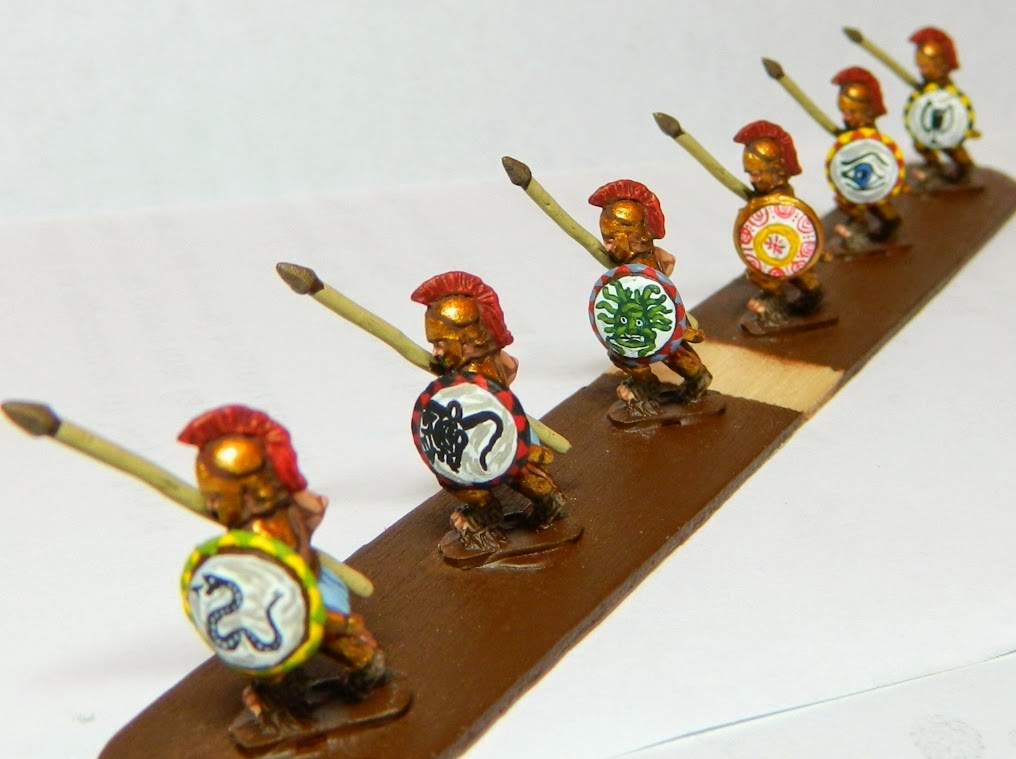 I bought TWO Old Glory Greek starter armies for Field of Glory a few years back.  After playing the rules a few times, I found they were not to my taste.  These hoplites have been sitting in their boxes ever since.

Still, I love the look of Greek hoplites, so I decided to paint these up in hopes that they may see the gaming table some day.

These are the "early" Greek hoplites from Old Glory's catalog.  Their later hoplites have piano wire spears, and I did not want to use my Dremel to drill out 400 spear hands, so I went with these figures and their cast spears.  All the hoplites wear a bronze muscle cuirass, so they must be very early indeed, probably pre-Persian Wars.  Some of the figures wear pturges.

Since these were cheap figures, I did not want to spring for LMBS transfers, so I hand painted the shields.  It takes more time, but they look nearly as good. 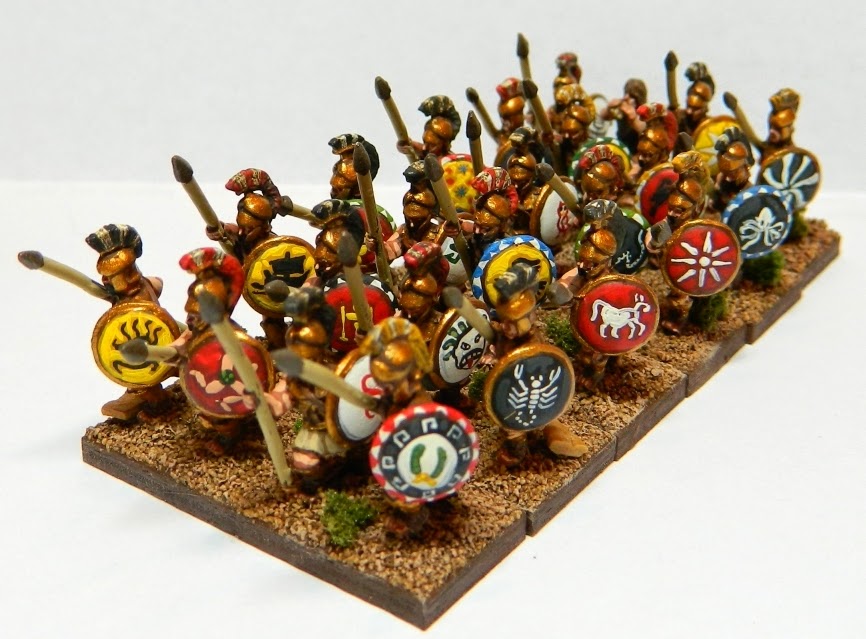 I used Litko bases with 40mm frontage and 15mm depth, the DBx standard for heavy infantry bases.  The four figures fit comfortably on these bases,

So now that my first unit is done, what is next?  Why 380 more hoplites!  I am painting them all in one go.  So far I have painted their helmet crests, armor, spear tips, and flesh base. 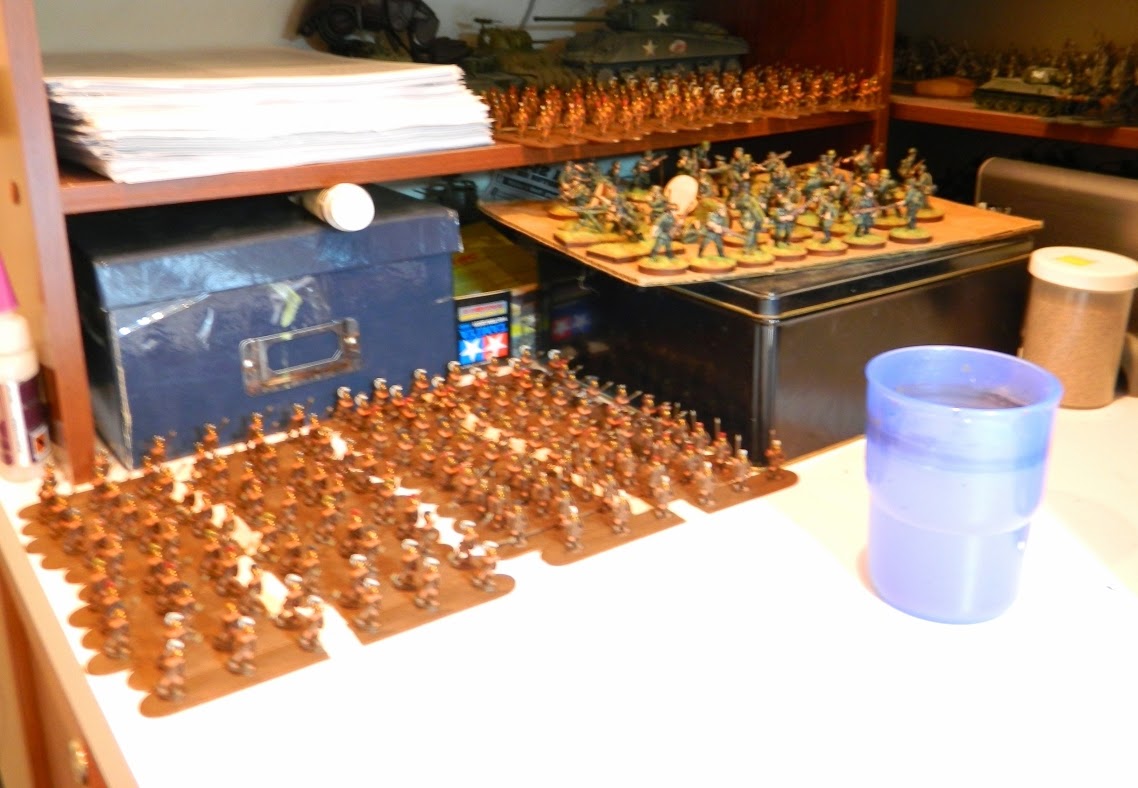 Now knowing my luck, Blue Moon will start making much better sculpts for even less money, so I will have to start all over again.