I started on these figures a couple of weeks ago, and my work got interrupted by my surgery last week. I was hopped up on pain killers most of the time I painted my highlights, but I still think these turned out pretty good. 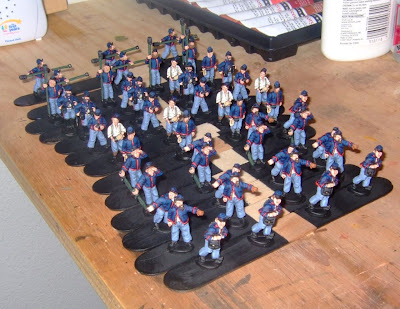 Sash and Saber has ten poses in their artillery gunners pack, and all the poses are very natural. I painted five packs at once, for a total of 50 figures. With the two gunners I painted long ago, this will give me enough for 13 gun stands, which is as many as I could ever need for a Guns at Gettysburg scenario. 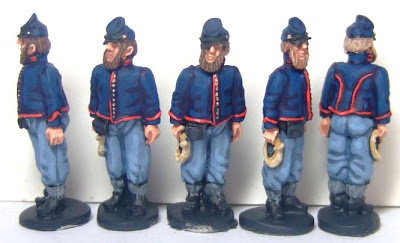 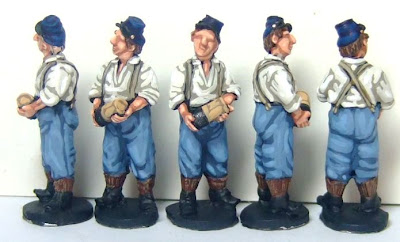 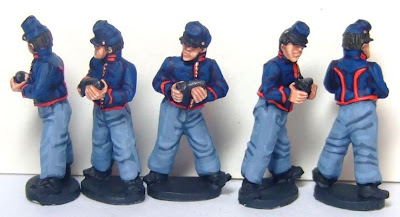 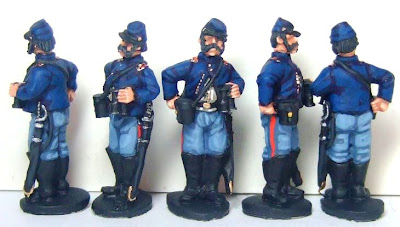 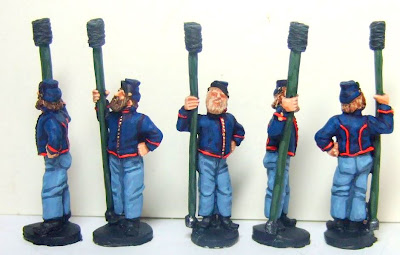 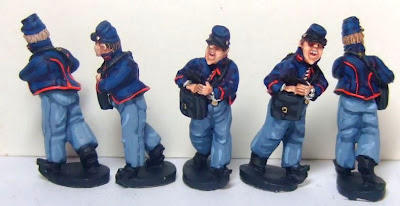 Next up the in painting queue are some 18mm Blue Moon ACW.
Posted by Scott MacPhee at 12:09 AM 8 comments:

I slipped in the snow Tuesday morning and broke my left fibula. I had to have surgery Tuesday afternoon to put a plate on the bone to immobilize the ankle. I've been floating in and out of consciousness since then.
Painting figures has been just about the furthest thing from my mind. It may be slow around here for a while.
The good news is this. Once I start to heal, I won't be able to do much but paint! So I guess every grey cloud has its silver lining.
But yeah. Breaking a leg sucks. Ouch.
Posted by Scott MacPhee at 9:34 PM 15 comments:

When Old Glory announced that they would be producing 15mm ACW figures under their Blue Moon label, I didn't really take that much notice. It seems there are already dozens of manufacturers competing for space in my 15mm ACW armies. So I might have picked up a pack or two out of curiosity, but I thought it unlikely that I would stray far from my favorite, Battle Honors.
Then Old Glory put up some photos of the new range, and I was intrigued. Long time readers of the blog will know that I prefer my horse and musket era armies to look like they have some discipline, marching in step and generally keeping eyes front. Blue Moon has four marching packs, each with fifteen separate poses! I like the Battle Honors marching packs, since they have enough variety to look like real troops, not wind up soldiers, but still they are all generally doing the same thing, marching. If the twelve Battle Honors poses could accomplish this, I figured that 60 Blue Moon poses would do it all the better.
EDIT: Joel from Old Glory writes in the comments that each bag contains 30 unique poses, so the four packs contain 120 different marching poses!
I went ahead and made a large order of Blue Moon figures. I bought 14 marching packs and 6 command packs, for a total of 480 figures. With my Old Glory Army card, I ended up paying $.36 apiece for command and $.30 apiece for rank and file. The only cheaper figures are Old Glory 15s and Battle Honors 15s from 19th Century Miniatures. 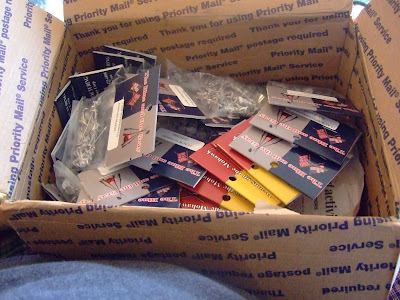 I arrived home yesterday to find the Old Glory box on my doorstep. Blue Moon offers some attractive packaging, and if any brick and mortar stores still stock historicals, these figures will look nice on some pegboard. The yellow-and-red header figures are French and Indian War for my friend Jon.
I will have more on the Blue Moon figures themselves as I paint some up over the next few weeks. For now, I will just write that they are crisply cast in hard white metal, the overall level of detail is very high, and the figures are very natural looking. I prefer the look of these figures to any others, including Battle Honors. The pictures below are intended to make for good size comparisons and are not showing Blue Moon at their best.
Today I wanted to compare the Blue Moon figures to other manufacturers. Most 15mm ACW lines work pretty well together. Will these new figures fit with your existing armies? 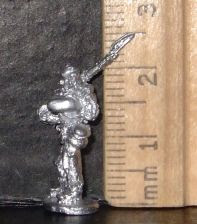 Blue Moon
Here's a typical marching figure all by himself. The 1mm base makes the figure look a little taller than he is. In fact, he is just under 18mm from foot to eye.
I remember from the late 90s and early 2000s how many gamers were bemoaning the scale creep that was moving 15mm figures in the direction of 20mm. The Blue Moon figures seem to have stopped right about where everyone else stopped, around 18mm.
The good news is that Blue Moon figures are all perfectly in scale with each other. The bad news is that most companies produced their ACW lines before the scale creep decade. 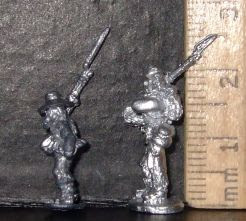 Frontier
Frontier has one of the older ranges, and it's darned near "true" 15mm. Because both figures have the same total height (25mm to the tip of the bayonet), they will mix very well on the table. I would not use Frontier and Blue Moon in the same unit, but they will look fine in adjoining units. 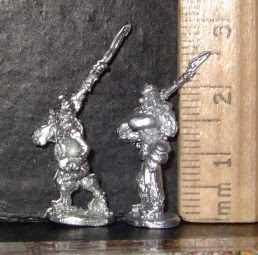 Old Glory
This is a pretty reasonable match. The Old Glory figure is about 1.5mm shorter than Blue Moon, and that's within my range for mixing figures. 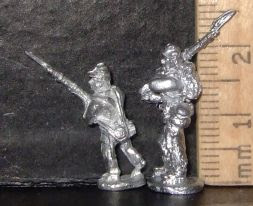 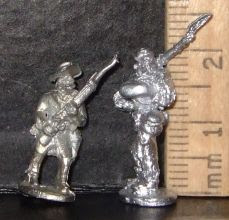 Stone Mountain Miniatures
Musket and Stone Mountain are probably the worst fits with Blue Moon. They are significantly shorter and more slender, and their muskets are even smaller! I still think these would work in different units, but they're pushing the compatibility envelope. 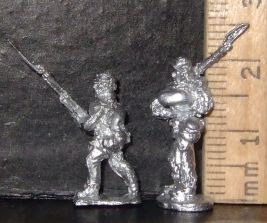 Now that the Romans are done, it's back to Bunker Hill! Here is my converged battalion of light infantry. I matched facings colors to the line regiments I'm painting for my force, and I tried to match the caps' front plate designs to those actually used by the regiments concerned. 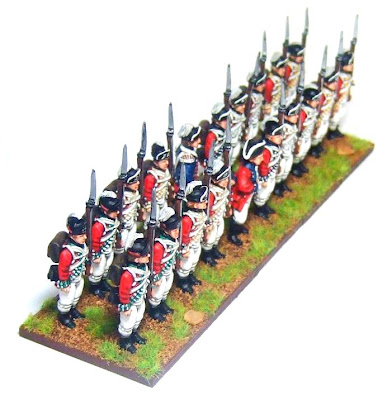 I'm waiting for an Old Glory order to arrive before I can finish the rest of the British, so I'll be moving on to some 28mm ACW figures this week.

When I shopped around for velites, I liked the look of 1st Corps' offering the best. The figures looked simple, which was just what I wanted. I did not want whole units of wolfskin armed light troops, as I doubt the velites all wore matching fur.
It turns out that the 1st Corps figures are a little too energetic for my taste. They are not bad figures, but they don't make for convincing looking units. 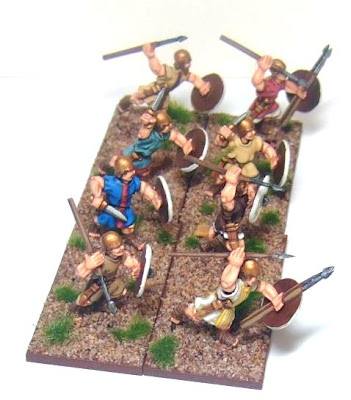 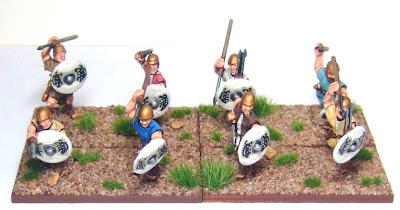 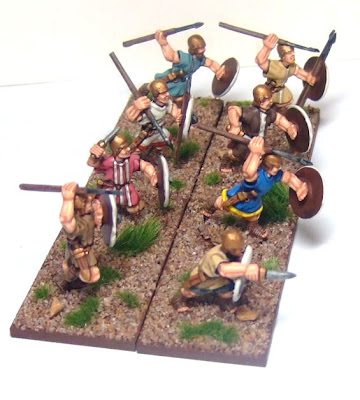 If I had it to do over again, I would probably go with Crusader's velites. I may still buy a couple of packs of Crusader figures to replace these. I've enjoyed some of 1st Corps' figures in the past (their German cavalry are very nice), but these velites leave me strangely unsatisfied.
I'm sorry to end my Roman army on such a sour note. These two units do in fact finish my Field of Glory Romans. I finished the first unit way back in October 2008, so this has been a lon project, at least by the calendar. I'll have photos of the whole army just as soon as the weather gets nice enough to take some.
Posted by Scott MacPhee at 6:57 PM 6 comments:

My 28mm ACW project has been languishing for a while. Yesterday I was able to finish these Sash and Saber guns. 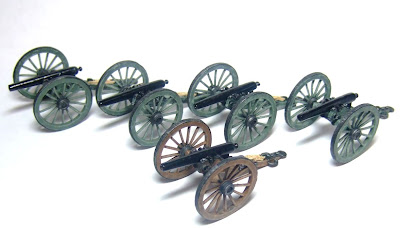 Now my Confederate gunners have some guns! In the coming months, I'll be focusing on getting my ACW armies to the point where I can actually play a game. I started this project in March 2008. I think it's time I actually get to push some lead around a table.