I liked the look of Glenn's Waterloo buildings so much that I purchased a sizable haul of Leven Miniatures buildings for myself, both from their Napoleonic and Civil War lines.

I started with a Civil War building, the Codori house and barn (or carriage house).  Pickett's Charge passed right through this property, or at least Pettigrew's troops did. 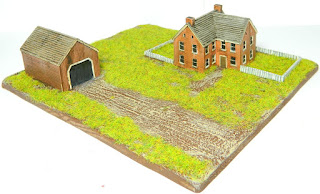 The house had a white picket fence enclosing a small yard.  I cut some plasticard to a height of 3mm, then painted three tones up to a white.  I think it makes a convincing picket fence.

I'm still refining my approach for buildings this small, but I am reasonably happy with how this one turned out.  Before I tackle Hougoumont, I'll perfect my technique on a number of these smaller sets.
Posted by Scott MacPhee at 1:05 PM 6 comments:

I'm still playing around with some smaller figures to see if they hold any appeal for me.  This morning I primed these 28 Baccus Frenchmen.  It took about 90 minutes to paint and base them. 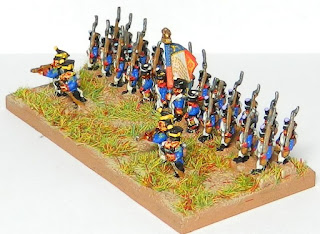 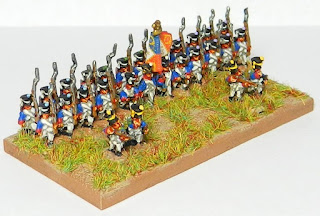 I do like them.  Fifteen years ago I had painted enough Baccus figures to play a small General de Brigade scenario.  My painting skill has definitely improved over the years.  I don't know if Baccus has solved the fragility of the bayonets since 2003.  Most strips are missing at least one bayonet.

How do these compare with the PicoArmor 3mm figures?  Both units have a frontage of 60mm.  With the 6mm figures I put 24 figures on the base; with the 3mm figures, there are 94 figures in the same area.

They both look like a line of troops.  The 3mm figures are less evidently French infantry.  The Baccus figures do succeed in looking French.  I know the whole point of smaller scales is to get away from individual figures and look at them en masse.  You're really painting a formation, not a figure. 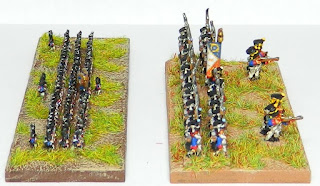 The below picture really shows the difference in size between 3mm and 6mm.  Those 3mm figures are tiny!

What do you think, fellows?  If I do start a small scale project, should it be in 3mm or 6mm?
Posted by Scott MacPhee at 2:24 PM 16 comments:

Yes, you read that right.  THREE millimeter Napoleonics are a thing.  I had painted Baccus's beautiful 6mm figures.  I had seen Irregular's 2mm blocks.  When I visited the PicoArmor stand at Little Wars, I bought a few small packs of 3mm Napoleonics to see just how they would paint up.

Just how small is 3mm?  Here is a picture with a quarter on the left and a single grain of rice on the right.  Yes, the figures are smaller than a grain of rice.

Although I did my best on these, they really do not bear close scrutiny as individual figures.  Instead, it is the group look that is important, and they do look like an infantry unit in line!  Here you can see the drummers and sergeants behind the mass of troops. 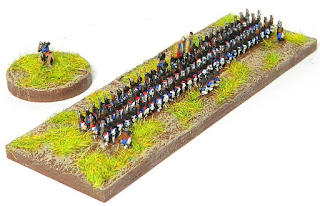 I spent a total of two hours painting this unit.  I think I could crank out an army of these pretty quickly. 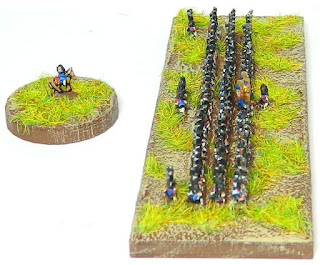 I am working on some hussars now.  If I like the look of them as much as I do the infantry, I may have to order enough troops to play a game with!

My friend Dale introduced me to miniature wargaming.  We often admire each other's work, but Dale, a real life tank crewman, frequently asks when I am going to paint something with an internal combustion engine.

Well, Dale, here are ten M4A1 Sherman tanks suitable for campaigning in NW Europe, 1944-5.  I broke out the airbrush, oil paints, and pigments for these, and I am quite pleased with how they turned out!

It has been a LONG time since I have gamed WWII in 15mm, but perhaps I will get my minis on the table now, if only to give my new tanks a workout!

Way back in 2012, I painted Punic Wars armies for Glenn to use in his Commands and Colors games.  Glenn sold those armies to a nice fellow named Doug, and Doug asked me to paint some chariots to supplement those armies.  I tried to match the style and palette I used six years ago, and I think I got it pretty much right. 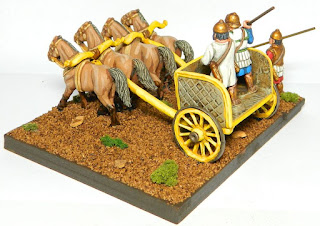 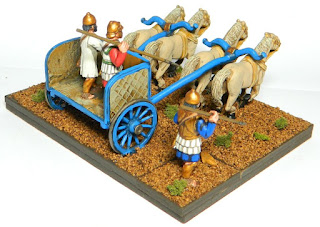 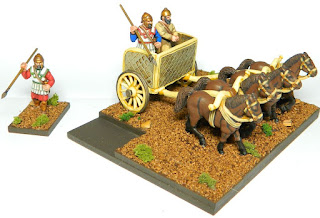 The chariots are from SHQ (ex-Newline), and they were a beast to build and paint.  Construction required me to have three or four hands just to keep the parts flush with each other while the glue dried.  I used five minute epoxy on most everything, so these models should stay together, but it did require me to sit like a statue, applying constant pressure for 5 minute intervals.  Many of the pieces did not mate well, and I spent a lot of time filing attachment points, hand drilling holes, and inserting pins.  The men are well sculpted, but the detail on the horses was soft.

Still, they do paint up nicely, and these eight chariots should vie with the elephants for spectacle in Doug's Carthaginian army.
Posted by Scott MacPhee at 8:20 AM 9 comments:

At Little Wars back in April, one of the more interesting vendors was PicoArmor, which specializes in 3mm figures.  I do enjoy going small on occasion, so I picked up some of their WW2 tanks and Napoleonic figures.  Today I finished painting and basing a company of Panthers.

Those are 2" square bases, roughly the same footprint as a 15mm tank model.  This will make it impossible to see any tank parking lots on my table!

The tanks are recognizably Panthers, although I am not expert enough to tell at a glance that they are ausfuhrung A.  I tried painting crosses and turret numbers, but the results are .... impressionistic.

Will these replace my 15mm armies?  Probably not, but I liked these Panthers well enough to consider ordering more 3mm troops.  I may try Sam Mustafa's "Rommel" with these.