HäT Industries very kindly sent me some test shots of some figures that they plan to release early in 2010. These are the Napoleonic Bavarian infantry of which I wrote in my review of their French legere. Please remember while reading this review that the test shots come from testing of the mold. The manufacturer can and often does make big changes between the first test shots and final production.
Disclaimer: Back in the early 2000s, I was a semi-official painter for HäT. There were four of us who received test shots, painted them, and sent photos to HäT for their website. I wasn't ever paid, but the figures were free and I painted a lot for them. I don't think this affects my review, but you can judge for yourself.
I. The Sprues 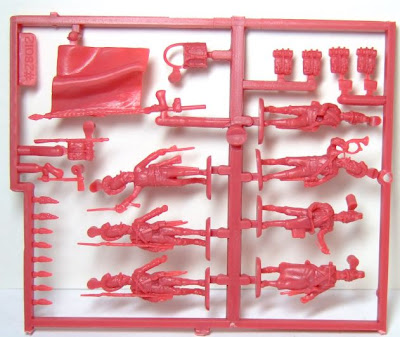 Set 28012 Bavarian Infantry Command
Each box will contain four of these sprues. The sprue has two identical marching NCOs, one officer with sword and baton, a colorbearer, a bugler, a drummer, and a pioneer.
The funny looking triangles on the bottom left of the sprue are the plumes for the helmets. Since plumes were not often worn, HäT has given the gamer the choice of using them or not. I chose to leave the plumes off most of my figures, reserving them solely for the skirmishers.
Plastic molds cannot have as much undercutting as metal molds, which means the plastic figures generally cannot have as sharp relief. Some other manufacturers have released figures with a great many parts. This allows for more realistic detail, but requires the wargamer to spend a lot of time building the intricate soldiers. For me, the lower price of plastic figures does not justify the extra work time they require. I would rather stick with metal figures that spend a half hour building each soldier.
HäT has compromised by making some separate pieces for the figures, but keeping the main body of the figure as a single piece. The parts fit tightly, leaving only a minor seam. I spent about 20 minutes removing all 16 figures from the sprues, assembling them, washing them to remove the mold release agent, and mounting them on painting sticks. It's close to the same amount of time it takes me to prepare metal figures for painting.
The only complaint I had about this command box is the cast on flag. I'm hopeless at painting even the simplest flag, and the Bavarian flag has a very complicated design. I resolved to replace the cast on flag with a paper flag. The hard plastic made it too difficult to remove the flag from the pole, so I ended up replacing the top of the pole with brass wire. 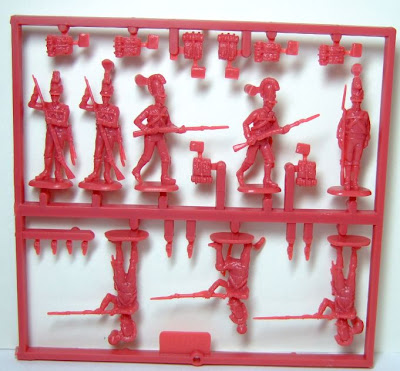 Set 28011 Bavarian Infantry (Action Poses)
This set has two identical loading figures, two different advancing figures, a figure standing at attention, two identical standing-firing figures, and a kneeling-firing figure. All except the man at attention are ideal for skirmishers, and the standing-firing and loading figures could make a good close order firing line.
I painted these figures as skirmishers from the light company of a line regiment. These action poses most clearly showed the limitations of HäT's single piece approach, with some areas that should have had gaps (such as between the musket and the body, or the arm and the body) instead having solid plastic.
The backpacks have the cartridge box and half of its strap hanging from the bottom of the pack. On some figures, the strap was not flush with the body. The gap is not very noticeable on the completed figures, but you can see the gap if you look closely at some of the images of painted figures below. 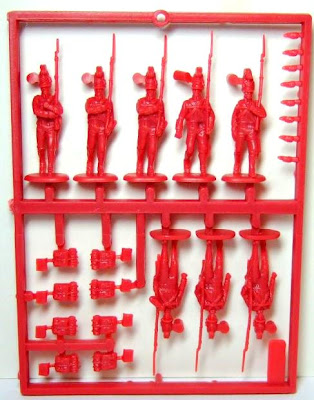 Set 28010 Bavarian Infantry (Marching)
This is the set that had me most excited. If you have read my review of HäT's French Legere, you'll remember that I liked the figures but thought it would be difficult to make convincing looking units from them.
To recap from that earlier review: HäT (and other 1/72 scale plastic figure manufacturers) have created some beautiful figures in the past, but the mix of varied poses often made it difficult to get units that ranked up properly. Often half the box consisted of unusable poses, and a wargamer actually saved money by buying metal figures that, although individually more expensive, could all be used on the table.
By releasing a box consisting solely of marching figures, HäT has laid that complaint to rest. As you'll see in the photos below, these figures make a great looking wargames unit. The marching pose also works very well with plastic molds, as the weapon and arms are held close to the body and there are no unsightly lumps of plastic where gaps should be.
II. Painted Figures
So those are the raw contents of the three sets. How do they look, painted and based for a wargame? 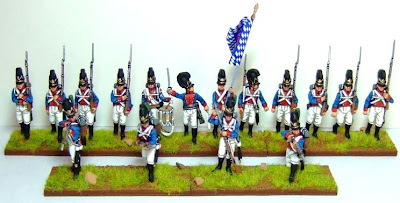 Pretty darned good, I would say. I used a two tone painting method on all of these figures. I painted these figures as the Graf Wilhelm infantry regiment, which had red facings and white metal buttons. The figures are based for DBN, with base frontages of 60mm. Not many 28mm Napoleonic lines can comfortably fit four figures on that frontage, but I think I could have squeezed in a fifth figure on each close order base.

The marching figures were the easiest to paint. That's good news for anyone building an army, as you'll need a lot of these guys. The folds in clothing were not as pronounced as on metal figures, but they were good enough to provide a good guide for my brush. The buttons stood out enough that I was able to pick them out with a size 000 brush with no problems. The faces are simple, and some detail was lost on the side of the mold, where the ears are. Still, I had no problem picking out nose, lips, chin, and cheeks.
The muskets on these figures are very slim, at least to the eye of a 28mm gamer. In fact, the muskets are right in scale. We're all just used to seeing them oversized, so a properly scaled musket looks very slender and fragile.
The poses are just perfect. These guys have good, fluid movement, with weight coming onto the leading foot. One nice touch is that the figures are in step, which is not always the case even with metal figures. 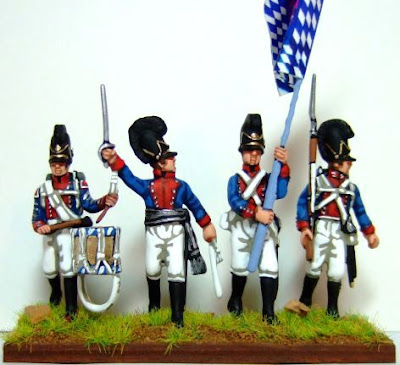 The command figures add a little color and variety to the close order line. You can see on my colorbearer where I added the brass wire. The pole is much thicker below the hands.

The skirmishing figures were the most challenging to paint, but my concerns about the poses were laid to rest once I finished applying pigment. The figures look very natural, and the "dead zones" with plastic fill are not noticeable on the completed figures.
III. Comparison to Other Ranges
The only real negative about these figures is their incompatibility with other 28mm Napoleonics. Even the metal figures with the best reputation for realistic proportions look very chunky next to the HäT figures. 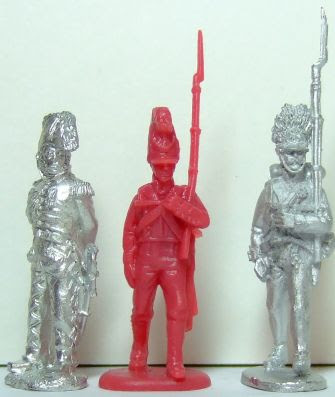 Perry French Officer, HäT Bavarian Infantryman, The Assault Group Hungarian Grenadier
Perry Miniatures has a pretty complete line of Napoleonics for the Hundred Days. I think the wargaming community reckons these to be among the most realistically proportioned figures. The Perry figures are beautiful, of course, but they're definitely chunkier than the HäT figures.
TAG has the slenderest metal figures I've ever seen, and they're the closest match for HäT. Still, this Hungarian grenadier is taller than the HäT Bavarian. Maybe that's OK, since grenadiers were supposed to be tall. The TAG musket is slightly longer and thicker than the HäT musket. I'd be comfortable mixing these ranges in different units, but you may feel differently. They're not an exact match.

HäT Bavarian
On the Barrett scale, the HäT figure measures 26.5mm. That's a little less than the 28mm they claim, but still pretty close.

TAG Hungarian
The TAG figure measures in at exactly 28mm. You know, I wrote some harsh things about these TAG figures when I reviewed them earlier this year. But painting these HäT figures has me wondering if the TAG figures aren't better than my initial impression. I may have to paint some of these to see. 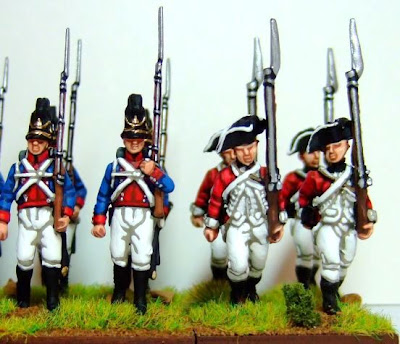 HäT Bavarians and Old Glory AWI British
The Old Glory Second Edition figures have a pretty good reputation for having reasonable proportions, but they look like Hobbits next to the elegant HäT figures. I like the Old Glory figures a lot, but you can definitely see a different style in play. The OG figures are shorter and much stockier than the HäT figures. 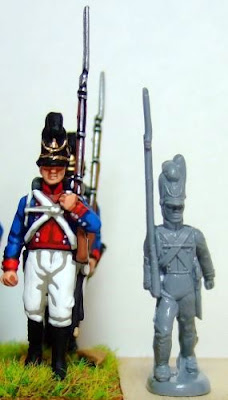 HäT 28mm and 1/72 Bavarian Infantry
I know that in my previous reviews of HäT's 28mm figures, some readers wondered just how different these 28mm figures were from the old HäT 1/72 figures. Are the 28mm figures really that much bigger? Well, the answer is yes. This is a completely different scale from HäT's old figures. And the quality of the sculpting is much improved as well. I liked HäT's old 1/72 Bavarians. I even painted some for HäT's website. (Wow! That was 10 years ago!)
HäT has been dangling their toes in the 28mm wargames market. They released their El Cid figures, which were nice enough. They released their French legere elite companies, which were beautiful individually, but flawed as gaming figures.
With the release of these three sets, HäT has arrived. These are serious wargames figures that compare very favorably with the competition. At a cost of about $.40 apiece, they're the best value on the market. The only negative thing I can say about these figures is that they're not really compatible with anything else. In switching scales, HäT has preserved the realistic proportions of their 1/72 figures. That might be a problem, at least as far as sales of figures goes.
If they plan to compete in the 28mm market, HäT should make a serious push to release a lot of 28mm boxes over the next couple years. I'd suggest that they focus either on the 1809 war with Austria or the 1813 campaigns in Germany. They'll have to get some cavalry, artillery, and generals sets to go with the infantry. Can they do it?
Since starting their company in 1996, HäT Industries has released 92 sets of Napoleonic figures, 98 sets of ancients, and 93 sets of 19th and 20th century figures and vehicles. That's 283 boxes of 1/72 scale figures in 13 years, for an average of about 22 boxes a year. They're certainly capable, then, of cranking out enough sets to make the 28mm Napoleonic wargamer consider fielding armies of these beautiful figures.
Posted by Scott MacPhee at 8:32 PM