This was a rough year for my hobby. I had a lot of other things going on.
In November 2010 my wife and I bought a 90 year old house and began an extensive remodel, stripping the entire interior to the framing, re-plumbing, rewiring, changing some of the layout, adding a bathroom, laying down new flooring, and replacing most of the roof. We hired a contractor, but I made daily inspections of the site until work was done in May, and of course I spent a lot of time visiting suppliers, picking out materials and finishes.
Then we took two weeks to move across town and get settled in our new place. I gave up a lot of square footage in the move, but we do live in a beautiful part of town. I spent June getting our old place ready for sale, and we were lucky enough to sell in September.
Along the way, I broke my ankle badly in February (still healing, still very painful). We also welcomed a new daughter in July.
So the point is this: I did not have nearly enough time to paint everything I wanted.
My gaming time suffered too. We lost one of our group's core when Austin moved to Arizona. Besides being a companionable guy, Austin was also centrally located, and we usually ended up meeting at his house.
The result of all this was a pretty disappointing year for my hobby. We played maybe three or four miniatures games this year, which is much lower than usual, and my painting production . . . well, it took a nose dive. Here is what I finished this year.
28mm AWI, 104 foot, 4 guns
28mm Republican Romans, 19 foot, 16 mounted
28mm ACW, 102 foot, 5 guns
15mm ACW, 111 foot
15mm Napoleonics, 122 foot
28mm Napoleonics, 92 foot
28mm Huns (for Austin), 16 mounted
28mm Carthaginians (for Glenn), 160 foot, 32 mounted
That was a total of 847 figures this year, way down from 2010 (1881 figures), 2009 (1864 figures), and 2008 (1910 figures). So I finished less than half my usual output.
For 2012 I hope to get my painting mojo back. I have a commission that should take me through to late Spring or early Summer, and another project for Austin that should take me another month or so. Once those are done, the rest of the time is all mine. My 2012 goals look like this:
1. Finish Glenn's 2nd Punic War Commission
I am just over a quarter of the way through, and I started with the toughest troops, all the irregularly clothed Carthaginian allies. Once I get into the professional core of the armies, things should pick up. Glenn will be driving to Coeur d'Alene to pick up the finished armies and play a few games with his version of the Commands and Colors rules.
2. Finish Austin's 4th century German army
I agreed to put a basic wargames paint job on Austin's Field of Glory Germans. I'll be block painting, with the only shading provided by the black primer, so this should be a quick project.
3. Finish AWI British for Bunker Hill
I got about halfway through this project in 2011, and I should be able to push through to completion by the Fall. Once the Bunker Hill army is done, I plan on adding more units using Fife and Drum figures.
4. Continue 15mm Peninsular War
I did finish some 15mm Napoleonics last year. I will continue to add British, French, Portuguese, and Spanish troops to my armies.
5. Work toward playing some 1797-1800 scenarios in 28mm
I love Eureka's Wars of the French Revolution range, and I will continue to add troops to my armies. I doubt I finish enough figures to play any scenarios during 2012, but I should make some good progress.
6. Add more figures to 15mm ACW armies
Regimental Fire and Fury may be the perfect rules set for my gaming group, and I will continue to paint Blue Moon figures to fill out my armies.
I hope you all had a good 2011, and I wish you happy gaming for 2012!
Posted by Scott MacPhee at 8:49 AM 5 comments:

Nothing takes more work than Gauls. I would say they take me two to three times as long as any other figure. I end up using almost all of my paints, and all the color changes are rough on my smallest brushes.
But man, nothing else looks quite as spectacular once finished.
These are three of the seven Gallic foot units for Glenn's big commission. Each unit has ten figures.
Edit: I should have written this to begin with, but all these figures are Renegade (except the skinny spearman in the light blue shirt--he's Relic), the shield transfers are from Little Big Men Studios, the spears are from North Star, and the bases are Litko. 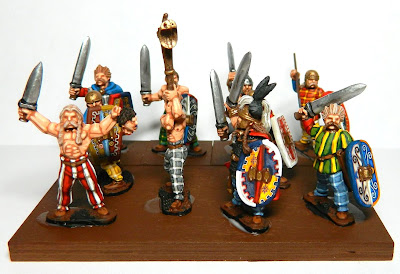 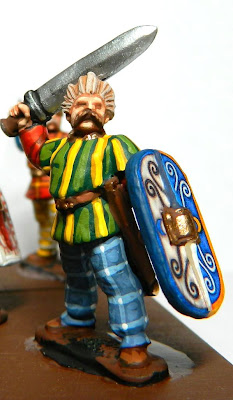 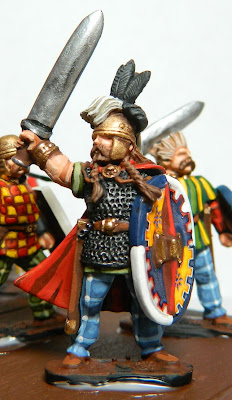 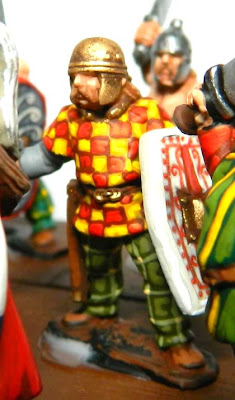 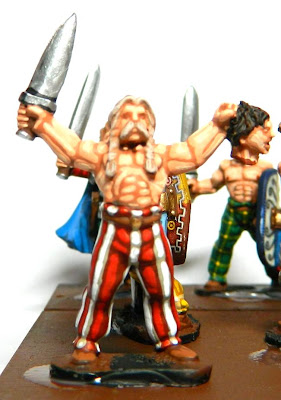 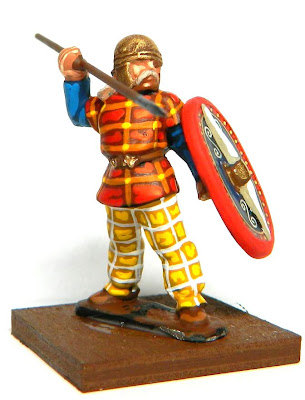 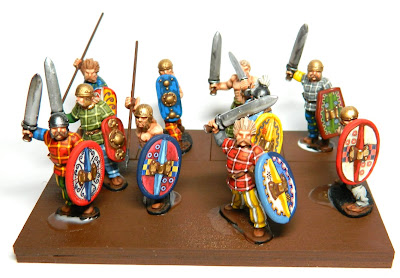 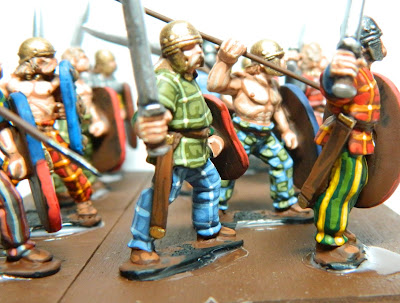 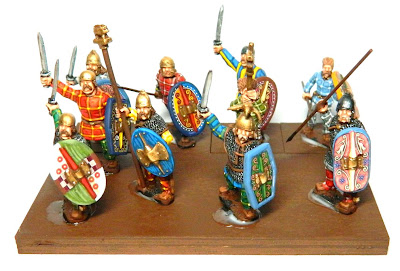 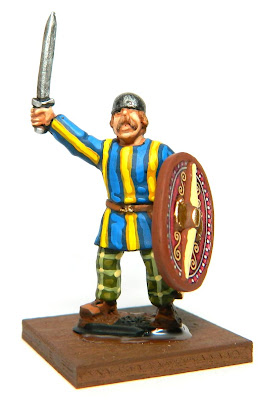 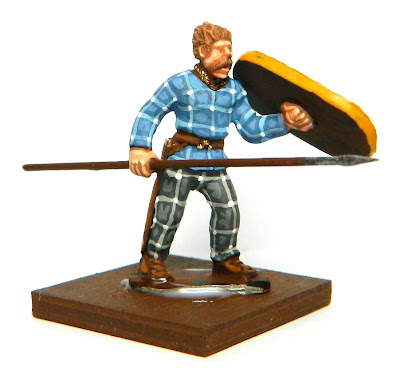 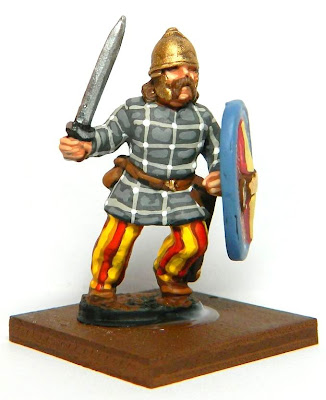 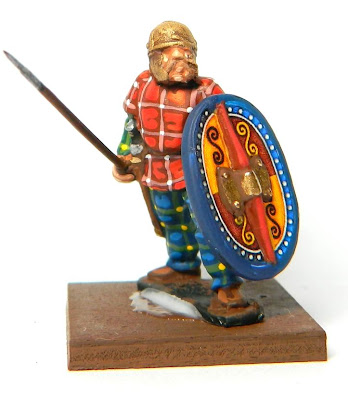 After three weeks painting Gallic cavalry, I took three days off to paint some of the new Blue Moon Napoleonics. These Austrians are from packs 15NAT-100 and 15NAT-101.

The figures painted up very well and very quickly. I have a pretty good method down for painting Austrians, so that helps, and after painting Gauls with all their individualized checked tartans and checkerboard shirts, it was nice to paint some uniforms!

The Blue Moon figures are very solid sculpts. All the detail is clearly defined, and the figures look great as a unit. I don't think these quite rise to the level of AB Miniatures, but they are definitely give the best bang for the buck.

These figures took a long time to finish, but at last the latest piece of Glenn's commission is done. These are four units of Gallic cavalry.
Half of the figures are Renegade, and the other half are from a variety of sources, mounted on Front Rank horses. I sculpted saddle blankets for the Front Rank horses, and I think the mounts are much improved. 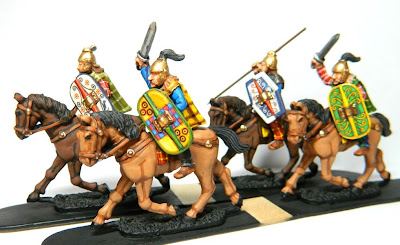 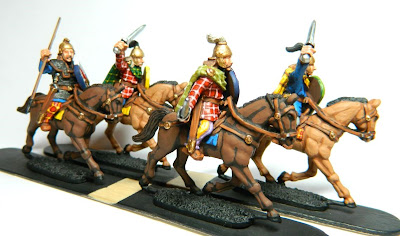 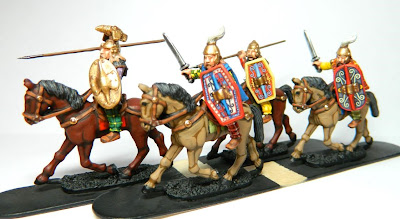 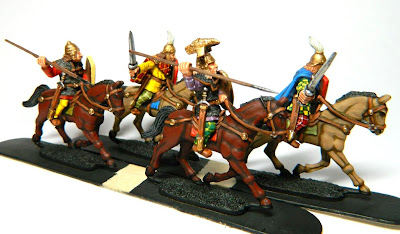 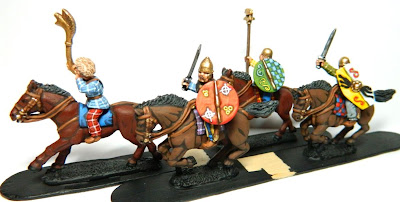 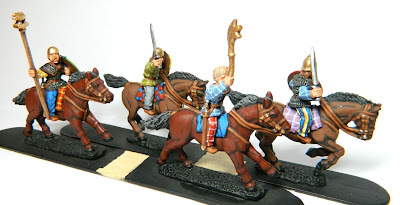 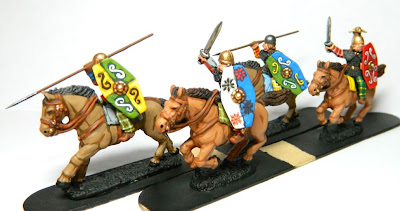 The postman slid a package from Old Glory 25s against my door this morning. I had ordered a few sampler packs of their new 15/18mm Napoleonics range. Released under the Blue Moon label, this looks to be a promising range. Old Glory 25s has said they plan to make the most comprehensive line of Napoleonics ever, in any scale.
The figures come in bags of 30 for the line infantry, 12 for flank companies, and 10 for command. With the Old Glory Army discount, the price works out to between $.30 and $.42 per figure. That's a little less than the next cheapest figures, which are 19th Century (Old Glory 15s and Battlehonors) at $.36 per figure. If you're willing to spend $240 on 19th Century, you can get a 40% discount, making them the cheapest at $.22 per figure.
Blue Moon packages their figures for retail, complete with cardboard header. The packaging is very attractive. Now if I just knew of any hobby stores that stock historicals! 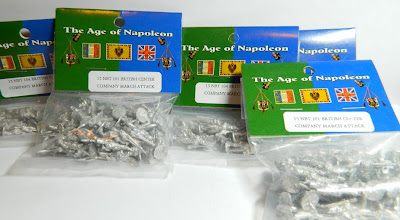 The Blue Moon Civil War figures were very robust and very tall. I liked them enough that I will only be painting Blue Moon for my 15mm ACW armies. Reactions on TMP varied, with a few posters unhappy with the ACW figures' large size. I was interested to see if the Napoleonics figures would be as big.

I ordered a few French, British, and Austrian figures. Because I own Austrians from the widest range of manufacturers, I'll take a detailed look at them.
My first impression was that these are adequate, but not brilliant, figures. The proportions are decent, while still thick enough to endure frequent handling. The faces are well defined, and the equipment has all the necessary detail. I thought the helmet crests were disappointingly small, but a quick look through my uniform books shows that most manufacturers' Austrians have oversized crests. These Blue Moon crests are about right.
The muskets and bayonets are thick enough that only a determined klutz will be able to break them. That's no small consideration, as I've had a couple dozen Battle Honors and AB figures lose bayonets and even musket barrels in the heat of battle.
So Blue Moon strikes a nice compromise between realistic proportions and robust castings. 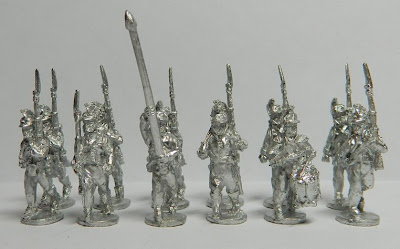 I play two sets of rules with my 15mm Napoleonics, Age of Eagles and General de Brigade. I use the same basing for both, four figures on 3/4" frontage and 1" depth. The Blue Moon figures fit comfortably on my bases.
(After I had already uploaded my pictures, I noticed that one figure is hanging off the edge a bit, but I had plenty of room on the other side. The error came from my own carelessness, not the figures' size.) 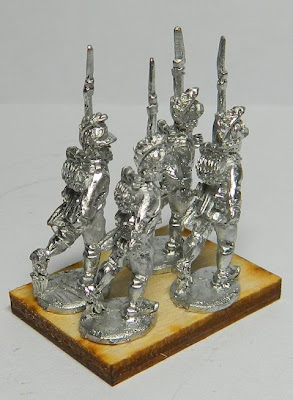 I found as many marching poses as I could for this comparison shot. The ruler is set about 0.5mm too low, but this at least gives you an idea of the ranges' relative size. Minifigs, Old Glory 15s, and Battle Honors are the smallest, at about 16mm from foot to eye. AB is the largest at about 18mm. Blue Moon measures around 17mm, close to AB but still noticeably smaller. 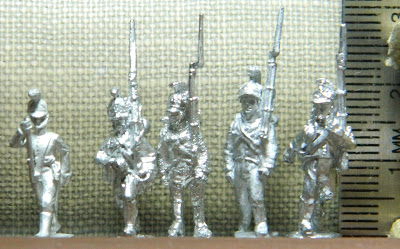 L-R Minifigs, Old Glory 15s, Battle Honors, AB, Blue Moon
The Blue Moon figures fit better than I had thought they would with the other ranges. Are Napoleonics bigger, or did Blue Moon scale back a bit in response to criticism of their scale creep? I compared the Austrian figure with some Blue Moon Confederates, and it is slightly smaller. 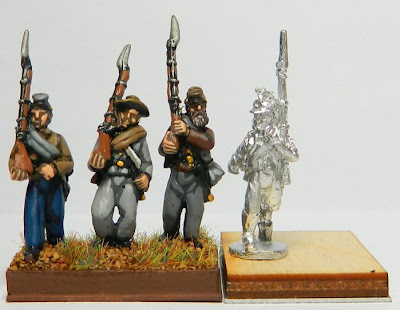 So what's the final verdict? I'll admit that I was a little let down by these figures. They are nice, workmanlike miniatures, but they don't hit that sweet spot for me that Blue Moon's ACW line did. When I saw Blue Moon's ACW figures, a banjo and fiddle started playing in my head. A fife and drum joined in. I could hear the tramp of marching feet, the rattle of musketry, and the booming of the cannon. They were just what I had been looking for in ACW figures. I was hoping, perhaps unrealistically, for the same thing from these Napleonics.
From the wargamer's perspective, Blue Moon Napleonics are nearly ideal. They are well proportioned. Like Kandie down at Showgirls, they are strong enough to be pawed over by inebriated middle aged men. If Old Glory 25s can make good on their promise to release an extensive line, these will show up on many wargamers' tables.
They certainly do not match AB for quality. On the other hand, they also don't match AB's price! For the Napoleonics gamer on a budget, these are your best bet. They are sturdier than Battle Honors and far better looking than Old Glory 15s. If you want the most attractive Napoleonics miniatures, go with AB.
To be fair, NO ONE matches the quality of AB Napleonics. They are one of the elite figure lines ever made.
Posted by Scott MacPhee at 4:21 PM 14 comments:

My friend Jon has posted pictures of his English Civil War collection on his blog. The gaming group has played quite a few games with these, and I'm always blown away by how good these figures look on the table.
http://www.palousewargamingjournal.50megs.com/Project_ECW.htm
Posted by Scott MacPhee at 7:31 PM 4 comments:
Newer Posts Older Posts Home
Subscribe to: Posts (Atom)