The Prussian army is finally done!  Here it is in all its glory.

These are regiments 1-12, with two musketeer, one grenadier, and one fusilier battalion per regiment.

This is the landwehr of six regions, with four two-battalion regiments in each region.

Here we have six regiments each of dragoons, landwehr cavalry, hussars, and uhlans along with four regiments of cuirassiers.

This army contains 674 foot, 91 mounted, and 21 guns.  I started in early March, so it took me just under four months.  All the figures are AB Miniatures.  The flags are from GMB Designs, and the bases are from Litko.

Links to previous armies in the giant commission:

The last army will be the Anglo-Allies at Waterloo.

Giant Commission -- Last of the Prussians

Glenn reviewed his orders of battle and discovered he needed more Prussian cavalry and some generals to command them!  He sent an order into Eureka, and I held the army until I could finish these last 31 mounted figures.

Blucher and His Generals 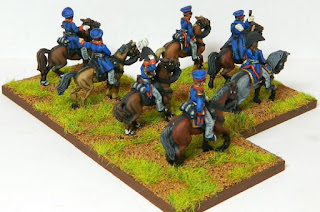 On Monday I will have pictures of the whole Prussian army.
Posted by Scott MacPhee at 10:17 AM 8 comments:

My last little painting interlude before finishing Glenn's armies is this unit, painted for my gaming buddy Kevin.

The figures are all Foundry with lances from North Star.  I made my own pennons from printer paper. 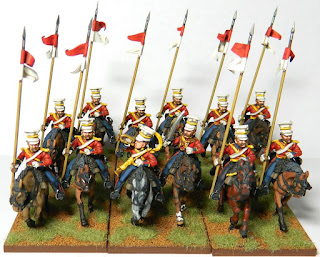 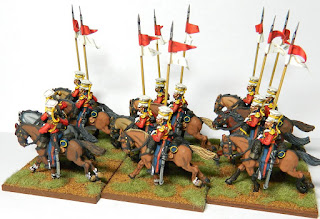 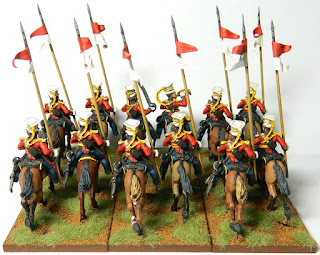 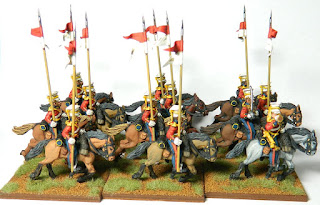 While I wait on some figures for Glenn's Prussian army, I attempted a few figures for myself.  I got a great deal on some Foundry Civil War figures, and a part of that deal was this set of 48 Confederate cavalry.

I was a little disappointed that Foundry only has two horse poses, but I think that by varying the horse colors I was able to keep the unit from looking too regular. 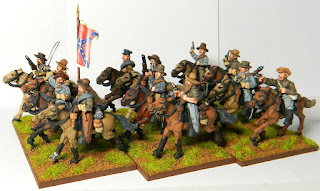 You'll notice that none of my Confederate cavalry wears a forage cap or kepi, and none has the yellow cavalry piping on their uniforms.  Look at original (not reproduction) items of Confederate cavalry dress, and you will not find much yellow.  I have only seen a couple of pieces, and only on officers' cuffs.  Since all my officers are wearing riding gloves, I omitted all yellow piping.

I went with a variety of greys and butternuts for these units.  I wanted to portray a veteran cavalry unit with the remains of various uniform issues mixed with some civilian dress.

As always, the flags are from the incomparable GMB Designs.

These 48 horsemen took me eight days to paint and base.  Now if Glenn's figures would just arrive, I would finish those Prussians!  Painting for myself seems unnatural somehow.
Posted by Scott MacPhee at 6:45 PM 8 comments:
Newer Posts Older Posts Home
Subscribe to: Posts (Atom)