HäT very kindly sent me two new sprues to review, hard plastic 28mm Napoleonic French light infantry.  Each sprue provides figures for one of the elite companies of French legere battalions.  Here I'm reviewing the voltiguers, but I do have the carabiniers nearing completion.

Contents of One Sprue
Each sprue includes one officer, two marching figures, two figures at attention, two figures at charge bayonet, two standing firing figures, one kneeling firing figure, and one loading figure.  Although the poses are identical to HäT's 1/72 set, the tooling is different.  You'll get four of these sprues in each box, so you can field bases of identical of similar poses easily enough.
HäT isn't the first to release 28mm hard plastic Napoleonics, but the sets from Victrix, with the vast assembly required, didn't really appeal to me.  These HäT figures are one piece castings with a seperate backpack/blanket roll piece.  Assembling these 12 figures took me less than a minute. 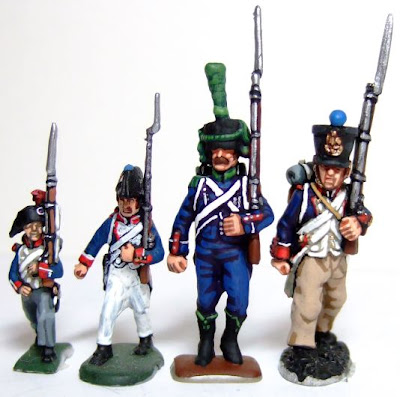 L-R AB 15mm, HäT 1/72, HäT 28mm, Crusader 28mm
So how do they compare with other figures?  I read one review on a message board that HäT's 28mm figures were no bigger than their 1/72 line.  Clearly that reviewer wasn't familiar with 1/72 figures.  The HäT 28mm figure is actually taller than the Crusader 28mm figure.
The real difference is in proportion.  I'm fond of the Crusader figure.  In fact, I've got a whole 36 man battalion of those figures ready to paint.  But the HäT figure gives a much better representation of the human form.  The only 28mm metal figures I've seen to touch the HäT for proportion are the TAG Austrians, but the TAG figures were so brittle that they broke during shipping.  The plastic figures are much heartier. 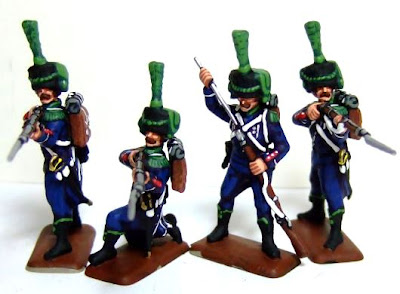 Skirmish Line
HäT is breaking new ground for them, producing figures primarily for wargames for the first time.  I know that many people game with 1/72 figures.  I'm one of them.  But HäT has continued the frustrating habit of earlier manufacturers of producing such a wide range of poses that convincing units are hard to build.  I like my horse and musket period units to rank up in lines of marching men, and I know I'm not alone.  To be sure, the 1/72 sets do contain marching men, but they're usually only a quarter of each box.  When I've asked HäT about this in the past, they've responded that most purchasers of their figures are either collectors or diorama builders, and those customers demand a wider range of poses. Marching
The 28mm line is certainly marketed for wargamers, however, and HäT will have to adjust the figure poses to satisfy that market.  These voltiguers have a better mix of poses than most 1/72 sets, with 6 of the 12 figures suitable for a close order unit.  The remaining six are either skirmishing or defending.  I could have done without the defending poses, but the skirmishers will be useful, since this was the light company of the light battalions.
HäT writes that one box of the Bavarian line infantry they have in the works will consist entirely of marching poses.  That will be a big improvement on these figures.  Of course, it may be that I'm wrong, and that wargamers want a wide mix of figures for their legere battalions.
The HäT figures are very nice, but they don't have the deep relief that I expect from metal figures.  The good news is that they're working on it.  This sprue has gone through three variations since they started work on it, with a fourth production version under work at the moment.  I got version two, and HäT tells me that the third and fourth versions have deeper detail.  I found the detail on these figures pronounced enough to shade and highlight, but it was tough to pick out some of the detail.
So what's the final assessment?  These are beautiful figures.  The mix of poses is a little disappointing, but for the price (about $.50 apiece), you really can't go wrong in picking up a box and giving them a try.  I don't know if I'll ever be truly sold on plastics.  I enjoy the heft of metal figures, and I worry about the potential for plastic figures to break, especially when handled by my students.  But as plastic figures go, these are well worth a look.
Posted by Scott MacPhee at 6:25 AM