Field of Glory requires that each army place its camp on the table.  That's one of the many things I like about the rules.  Many accounts of classical period battles mention the camps and how a threat to a camp could change a battle's outcome.

My Macedonian camp is pretty simple.  It's an unfortified camp, so I just used a Greek tent and various foodstuffs, all from Baueda, to make it look like a supply stockpile.  This is the first time I have ever used Baueda, and it's nice stuff.  These models cost me about $8.  I guess I could have tried to scratchbuild something, but I could never have made such beautiful amphorae.
Posted by Scott MacPhee at 6:24 AM 3 comments:

In Age of Eagles, brigades can go into disorder, and the gamer marks this status by placing a casualty marker next to the brigade.  I never seem to have enough dead men, but I was able to use these Old Glory casualties to make appropriate markers.

I will probably also use these to mark casualties for General de Brigade games.  I think I will see if I can modify some Austrians to make some dead men for their markers.
Posted by Scott MacPhee at 1:38 PM 5 comments:

This is a bit of a blast from the past.  Like many gamers, I got my start with 1/72 plastic figures.  I agreed to paint these as part of a trade with another gamer.  The figures are all Italeri.  I was surprised at how well these 15 year old figures hold up. 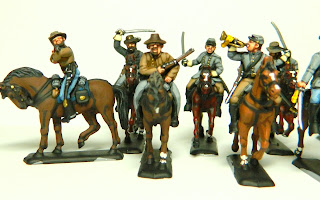 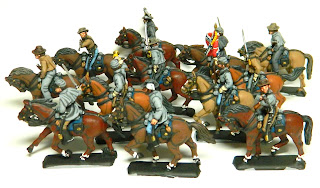 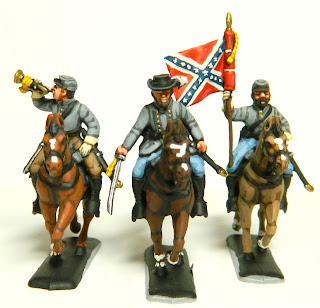 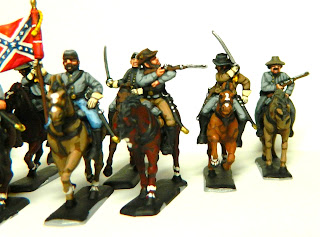 I spent the past four weeks lavishing my painting attention on 120 Napoleonic French fusiliers.  These are all French in the 1806-1812 uniform, campaign dress, from Blue Moon Manufacturing.

I base my infantry four to a stand, with 3/4" frontage and 1" depth.  This is the preferred basing for Age of Eagles, which is my usual rules set for large, multi-corps battles.  It also works well for General de Brigade, my favorite tactical set. 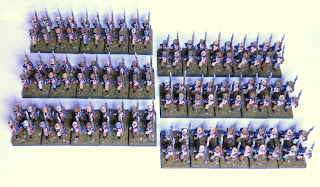 Old Glory has done a great job promoting their new Blue Moon line, but I have seen many gamers complaining that the figures may be too large to fit comfortably on bases for 15mm figures.  I had no problem at all getting these figures to fit, and I find the end result very pleasing. 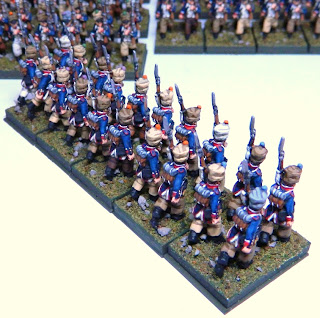 As these are line infantry, I went with uniform grey for their rolled overcoats.  For light infantry, I would have made them all tan.  Although these figures are small, I went all out and painted the white piping on cuffs and collars and the red piping on shoulderboards and turnbacks. 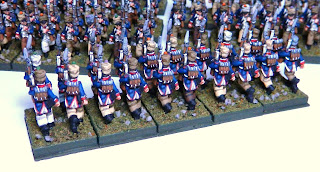 Once I applied the flock, I gave the base work a glue wash to ensure that it stays in place.  The figures then got a sealing coat of gloss clear lacquer, an airbrushed coat of gloss acrylic lacquer, and a spray of Testor's Dullcote.  The figures thus have two solid layers of lacquer to ensure that they will not chip, and the Dullcote eliminates any sheen.

I've read comments from a number of gamers who write that, while they admire the sculpting on the Blue Moon figures, they do not plan to buy any "18mm" figures for fear that they will look too large on the table.  To show just how mistaken this view is, I took a series of comparison shots, mixing Blue Moon with the other manufacturers that I field in my armies.  As you can see from the picture, Blue Moon actually offer a good compromise between the larger and smaller "15mm" figures. 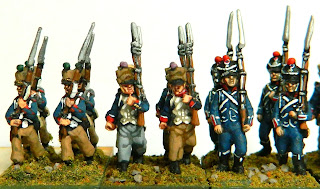 AB remain the largest figures in the 15mm-18mm size.  Battle Honors are some of the smallest troops in my French army.  Although the Blue Moon are larger, they do not seem out of scale. 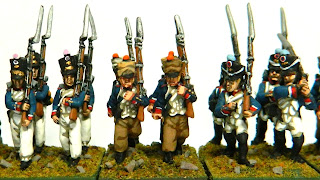 Eureka and the old Old Glory line are both larger than Blue Moon, but only slightly.  The long bayonets on the other figures make the Blue Moon figures appear smaller than they are. 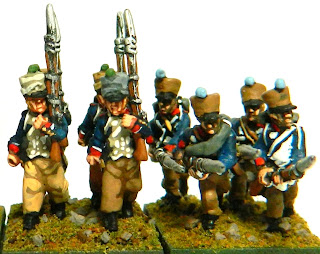 The smallest figures in my army are these ancient Old Glory figures.  They are indeed short, but they are also leaning forward, which makes them appear even smaller.  Again, I have no problem fielding both of these ranges on my table.

That's probably enough on the size of the figures.  How do I like them overall?  Well, they are not quite up to AB's standard.  Still, they are in the ballpark.  If AB gets an A+, these figures get a solid B.  I love AB figures and consider them the best historical miniatures available in any scale.

Still, for wargaming, AB have one large drawback: their bayonets tend to bend and break.  I have some veteran AB units where a third of the figures have broken bayonets.  These Blue Moon figures are much more robust.  I doubt I ever get a broken bayonet or musket barrel on these figures.

Cost does matter to me too.  I will splurge from time to time, but for the rank and file of my army, I look for the best compromise between price and quality.  AB cost $.70 apiece.  These Blue Moon cost me $.30 apiece.  I like a lot of figures on the table, and that $.40 difference really adds up when my figure count tops 1,000.

I'm sold on these Blue Moon figures.  As I add more troops to my Napoleonic armies, I will turn to Blue Moon first.