28mm Back of Beyond

In the absence of my regular gaming group, my kids and I have been gaming together. We are painting figures for a pulp campaign, long on story and short on tactics.
My daughters and I have fielded these eight adventurers from Copplestone Castings. They block painted and applied Minwax Polyshades "Tudor."

I see some colorful escapades in our future!
Posted by Scott MacPhee at 8:49 PM 4 comments: 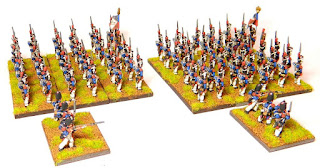 I have moved on to the French, Polish, and Saxon line infantry.

Wars of the Roses in 28mm, Yorkist Artillery

I have enjoyed watching Jon's Wars of the Roses project take shape. I enjoyed it so much that I decided to join him.  I placed a large order with Perry Miniatures and waited for my figures to cross the Atlantic Ocean. 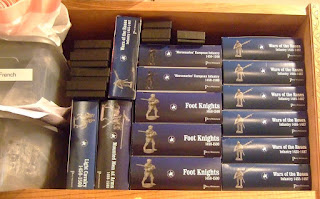 My intent is to use the figures for "To the Strongest!" with a 4" grid.  I am building both armies for the battle of Tewkesbury.  All figures will have 60mm frontage.  The medium foot will be in two ranks, 40mm deep, while deep units, artillery, and cavalry will be on 60mm squares.
I started with some metal cannon and cannoneers.  These will all be part of Edward IV's army, and I figure that any artillery would have been part of the king's household troops.  As such, these men will wear the livery of York.
I started by painting the guns in medium flesh.  Once that dried, I streaked oil paint over the entire thing, letting some of the flesh peek through.  This technique makes for a fairly convincing wood grain.  I used raw umber on the left and burn umber on the right. 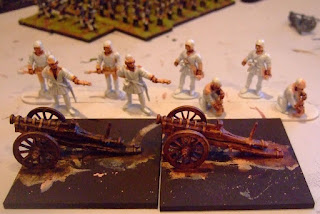 I changed how I painted the figures, breaking from my usual technique of building highlights.  Instead I block painted these, applied ink washes, and highlighted with the same colors as the block shades.

Because I am sneaking WotR figures in during my commission work, I will not be able to paint many of these at a time.  That will actually work out well for me, since I will be able to hand paint the livery in smaller batches.
Posted by Scott MacPhee at 6:59 AM 7 comments:

Here are the next 78 figures to cross the painting desk: the chasseurs a pied of the Imperial Guard.

I am working on the foot grenadiers now.  The guard is almost done!

The latest 72 figures for John's French army are these colorful middle guard Fusilier-Grenadiers. 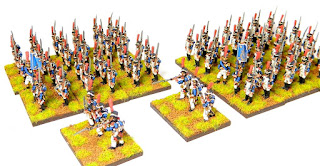 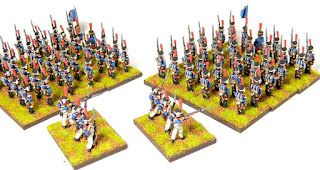 I have four more guard battalions to paint, and then I can tackle the French line infantry!

Work continues on John's French army. Today we have two battalions of the Tirailleurs of the Young Guard. 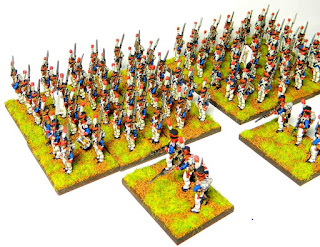 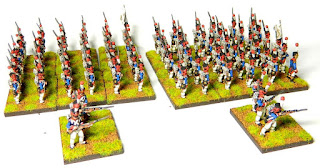 I love the way these turned out. When I am able to paint more Napoleonics for myself, I think some French Young Guard are in order!
Posted by Scott MacPhee at 6:52 AM 2 comments:
Newer Posts Older Posts Home
Subscribe to: Posts (Atom)