I'm preparing for a General de Brigade game on Saturday. My 15mm Napoleonics are all based for Age of Eagles, which doesn't portray skirmishers (at least not by placing them on the table top). So every time I run a General de Brigade game, it seems like I have to paint some skirmish stands first.
These are Old Glory figures, pack ANL01b "Grenzers Plus Command." The figures are decent enough. I primed these yesterday, then painted and based them today. 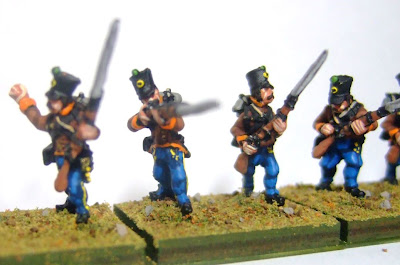 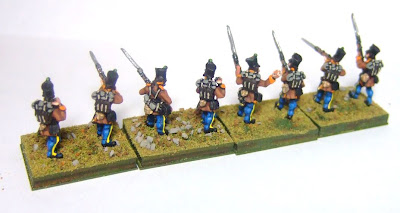 Hopefully Saturday night I will have some pictures of our game. We'll be refighting Eckmuhl.
Posted by Scott MacPhee at 3:09 PM 6 comments:

Glenn Drover, the same chap who commissioned those big ACW armies last year, has commissioned me to paint an even larger project. He has adapted Commands and Colors Ancients for the tabletop, and he will be gaming the Second Punic War.
This is indeed a massive commission, consisting of 562 foot, 107 horse, and 4 elephants with crew. I expect it will take me until at least the Spring of 2012 to finish it.
Here is the first unit, Spanish Scutari. Glenn asked that I vary the tunic colors, and I have worked in four different shades into this unit.

I always think that the most important part of painting ancients is the shield. I used two tone shading to make the shields pop out.
These rankers are all Renegade Miniatures. 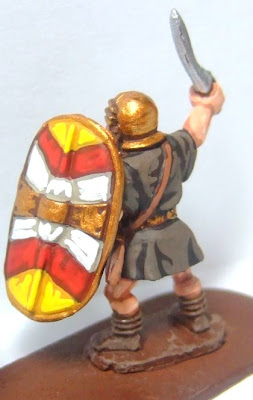 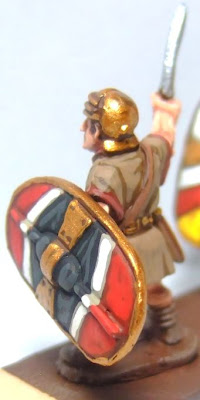 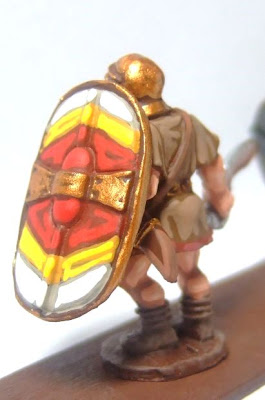 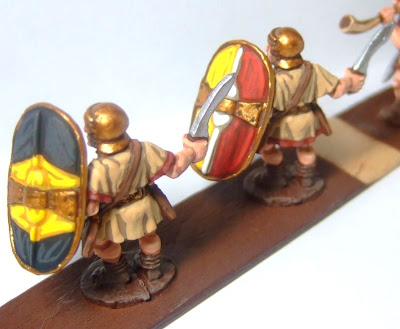 The command figures are from Crusader Miniatures. 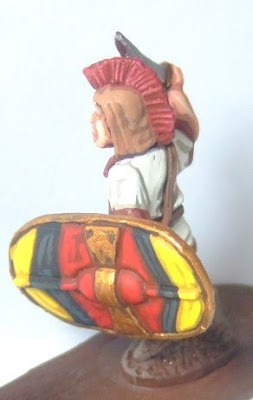 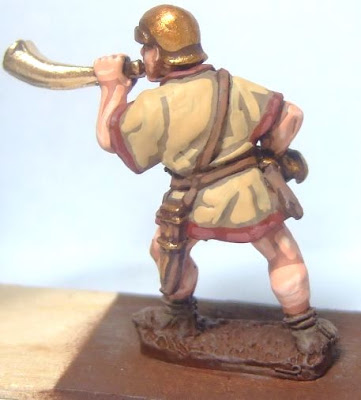 Watch this blog to see the project's progress. Glenn has bought some absolutely beautiful figures from a variety of manufacturers, so if you have any interest in gaming the Punic Wars, you'll find something of interest here.
I am likely to paint the occasional unit for myself, so it won't be all Punic Wars all the time. I got a little burnt out during the last commission, as I slogged my way through over 400 Civil War figures with no break for anything else. I'll try to avoid that this time and keep myself fresh by turning on occasion to other periods.
Posted by Scott MacPhee at 8:46 PM 7 comments:

Alte Fritz also sent me some samples of the redcoats, and they paint up nearly as nicely as the American militia. Because these figures are so lightly equipped, they look more slender than the Americans.
Ansell has depicted the British in campaign dress, with hats turned up on one side and simplified jackets. He has captured the look of the redcoat on campaign very well. It's not the Hollywood picture of the British soldier, but this is likely how they looked in the field.

Here are the eight poses. Once again, I have included very large pictures to allow a more detailed look at the sculpts. Any paint job is likely to look a little crude at this level of magnification. The figures are better than my paint job makes them look. 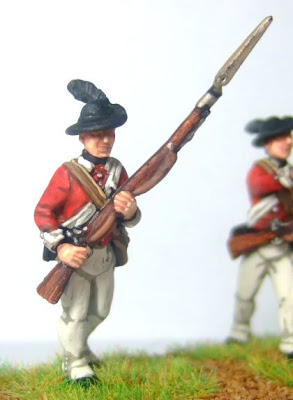 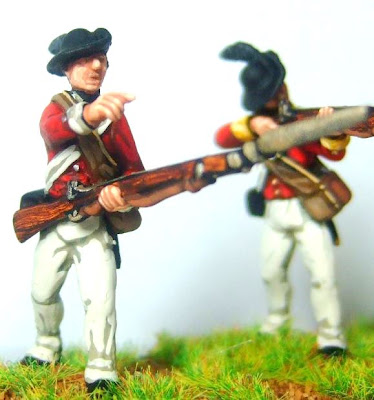 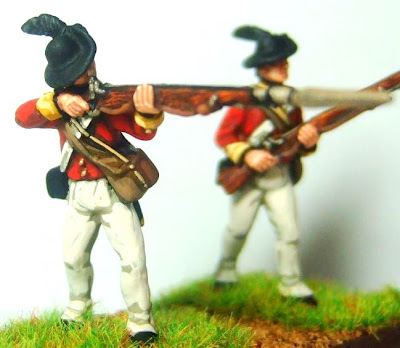 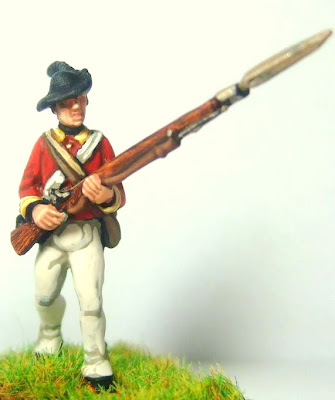 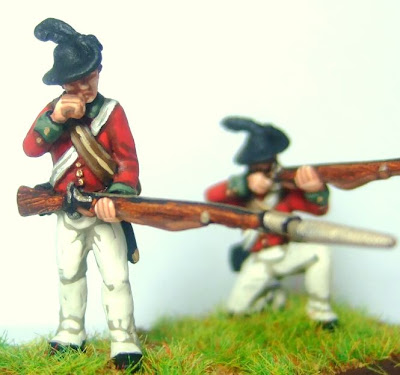 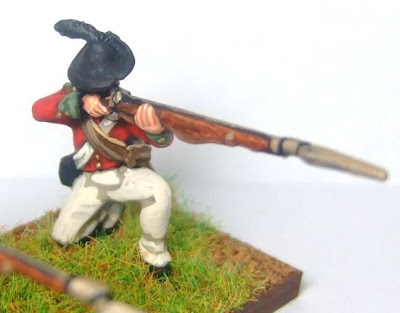 I mistakenly painted the metal canteens as though they had a cloth or leather cover. One nice thing about this entire range is that straps all belong to items of equipment. 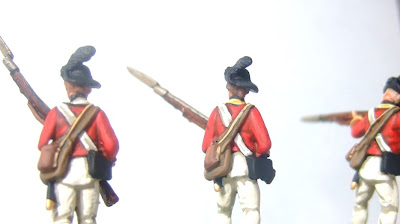 Again, these will not be to everyone's taste, but if you appreciate realistic proportions, you'll enjoy these figures.
Posted by Scott MacPhee at 9:04 AM 6 comments:

Ansell certainly has a distinct style. His figures are the closest to actual human proportions of any metal wargaming miniatures I've ever seen. I had always thought that sculptors made heads, hands, and weapons oversized to allow for more detail and durability, but Ansell manages to load a wealth of detail into a small space.

Durability has been a tougher nut to crack. When I reviewed Ansell's Napoleonic Austrian grenadiers (part I, part II), I found the figures too fragile for wargaming. Bayonets and even ankles arrived broken. Part of the problem was surely the packaging, as The Assault Group sent me some replacement figures packed in foam that held up a little better, but the bayonet joins were still a little weak.

Ansell appears to have solved the durability problem through clever posing. These AWI figures are robust and will survive frequent handling.

When I first examined the American militiamen, they strongly reminded me of white metal scale miniatures that figure modelers use. They're that detailed and well proportioned.

I mounted these figures as skirmishers for British Grenadier. I like my militia to look motley, so I varied the colors of jackets, waistcoats, breeches, and gaiters. The sculpts themselves provide some variety, with different cuts of jackets, different pants, varied equipment, and even one man in shirtsleeves. 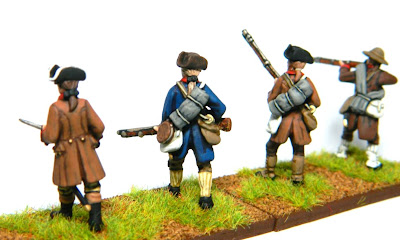 Here you can see both the variety in accoutrement and the superb level of detail these figures have.

I haven't seen many painted examples of these figures on the web, so I include here some larger images of the finished soldiers. Any crudeness in their appearance is not the fault of the sculptor, but the painter. 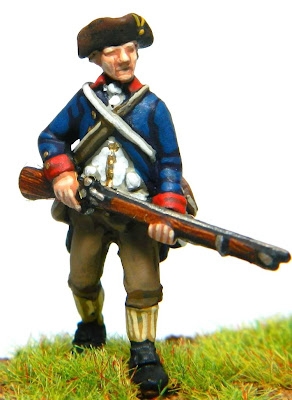 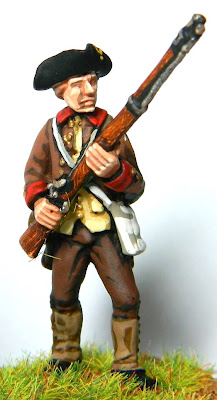 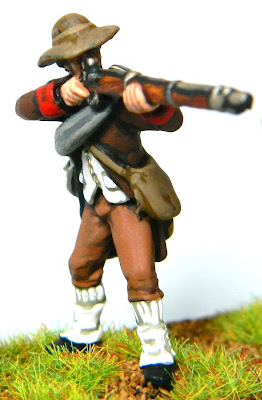 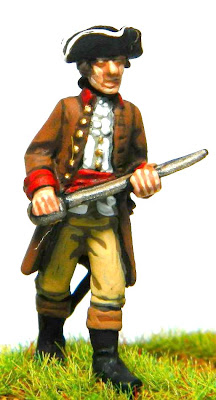 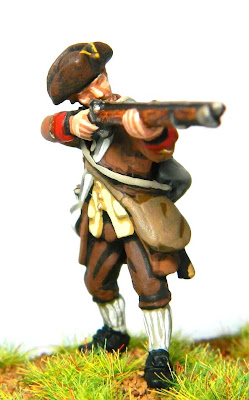 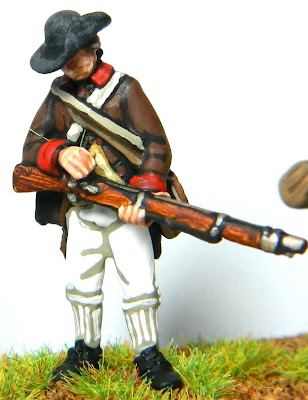 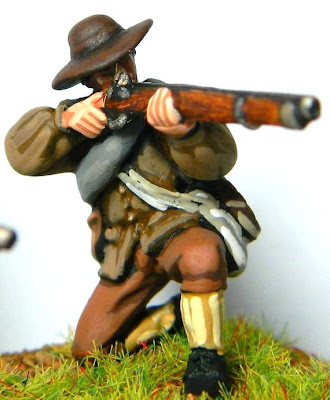 When I say that these figures are more anatomically correct than any others on the market, I really do mean it. Perry had set the standard, but look at the Fife and Drum miniatures next to some Perry miniatures. 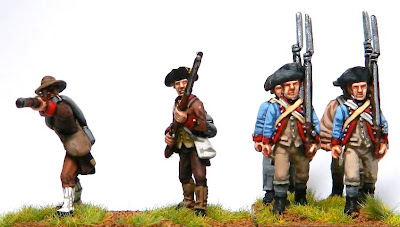 I have no complaints about the Perry figures. They're beautiful miniatures, and almost all of my AWI miniatures are Perry. Fife and Drum clearly have an edge in their proportions. I will continue to buy Perry's figures, but I will likely be adding quite a few regiments of Fife and Drum.

Old Glory's AWI range is one of their best, and I have been working some Old Glory units into my armies. They have their own charm, but Fife and Drum look far more realistic.

Those wishing to game the American Revolution have an enviable dilemma. With so many excellent ranges to choose from, individual preference can have full reign. Perry Miniatures still have the most complete range of high quality figures. Old Glory Miniatures still have the most animated figures. And now Fife and Drum Miniatures have the best proportioned and most realistic figures. You can decide which matters most to you and buy accordingly, or, like me, you can enjoy each brand on its own merits and mix them in your armies.
Posted by Scott MacPhee at 7:57 PM 10 comments:
Newer Posts Older Posts Home
Subscribe to: Posts (Atom)