Although descended from highland Scottish stock myself (the MacPhee, or Macfie, or McFee clan hails from the island of Colonsay in the Inner Hebrides), I have never painted the 42nd foot, in which several MacPhees served.  Who knows, but maybe one is an ancestor.

Those highland uniforms have always been a little daunting, with their checked hat band, hatched stockings, and patterned kilts.  So when Blue Moon released their highlanders, I bought a few packs, prepped and primed the figures, and then let them sit for several months.  I started painting these figures in June, tackling them a little bit at a time.  This weekend I made the final big push and got these ready for the table.

I painted enough figures to field the 42nd Foot at full strength of 800 men in a 1:20 figure ratio.  There are 27 center company men in kilts, 4 grenadiers, 4 light company men, and five command, including drummer and piper. 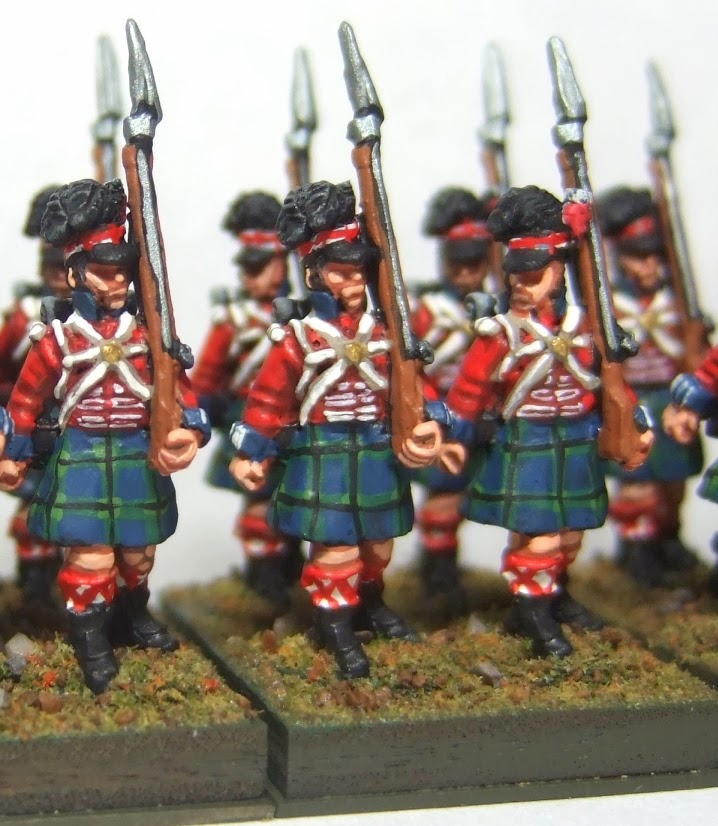 The Blue Moon figures are well proportioned and attractive.  The sculptor has included an impressive amount of detail, right down to cuff lace.  I resisted the urge to make an attempt at the MacPhee tartan and painted a simplified version of the government tartan instead. 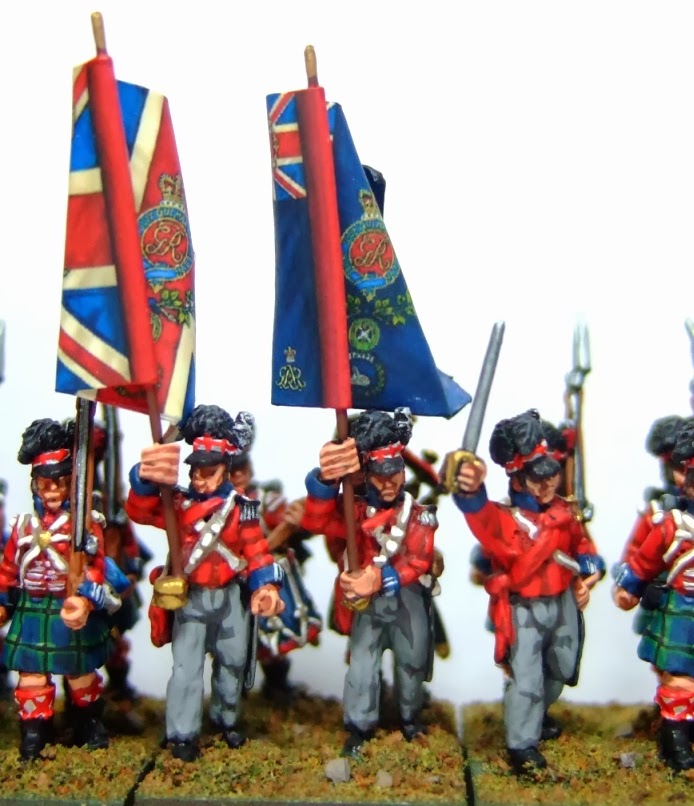 I cut away the oversized cast flagpoles, drilled out the standard bearers' hands, and inserted some .020 brass rod.  The flags are from GMB's outstanding 15mm range.  Now that I have tried their flags for a few units, I will not use anything else.  These are the best looking and most detailed flags on the market.  I always paint them with a clear matt varnish before sealing the figures with Dullcote.  Otherwise the inks will sometimes fade. 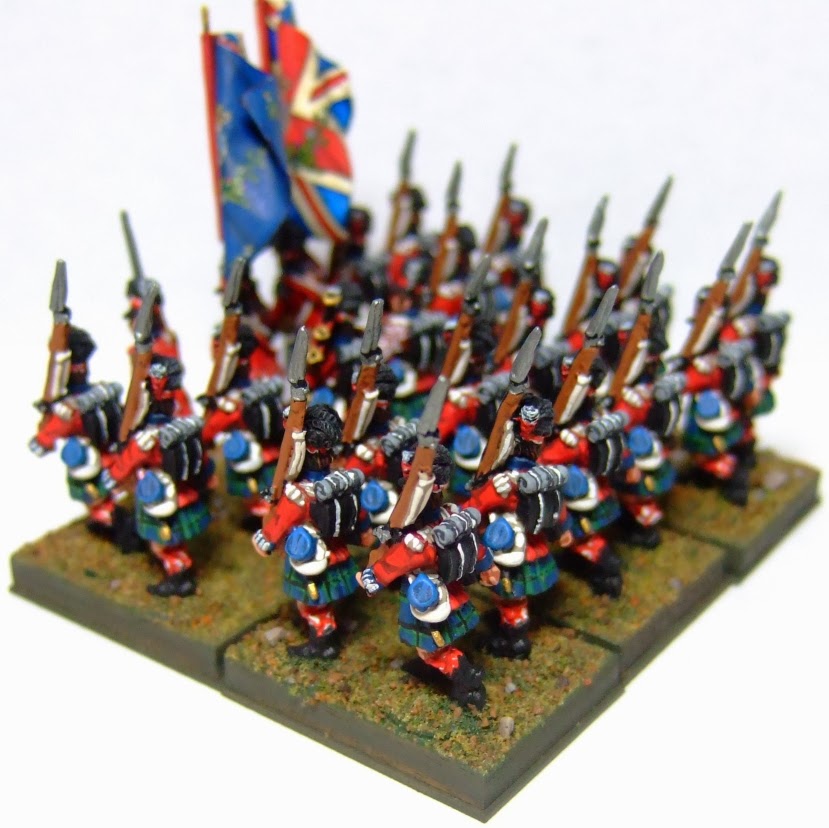 The figures all carry a backpack with blanket roll, haversack, canteen, and cartridge box. 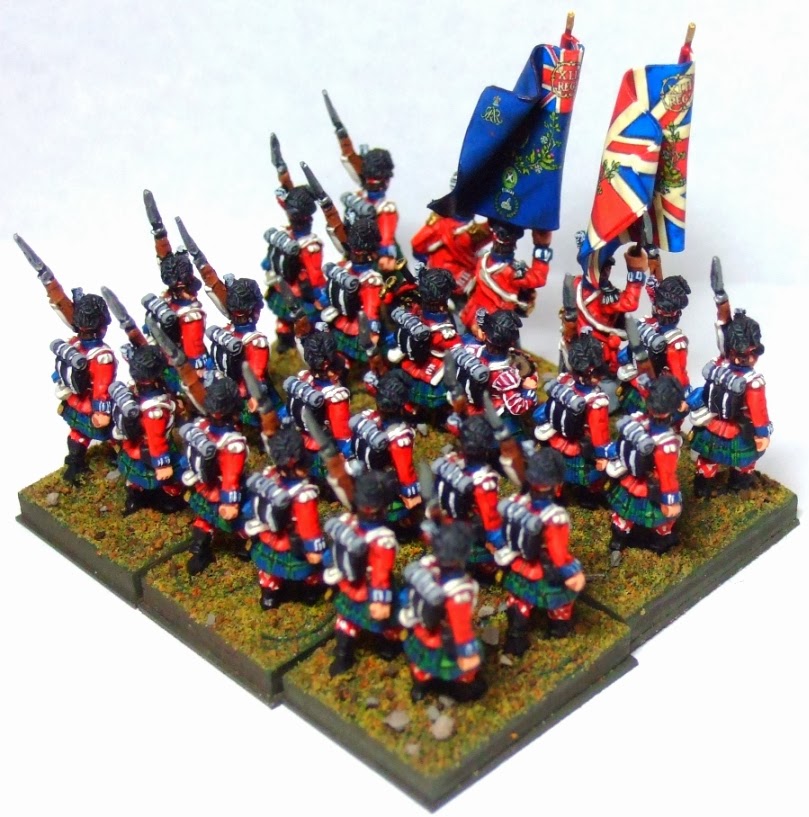 I am very pleased with how these figures turned out, but one highland regiment is enough!  I have prepped two regiments of Blue Moon British line to fill out the brigade.  I'll be painting those as the 24th Foot and 61st Foot.

Here are 102 Union infantry, all painted in the past two weeks.  The figures are from packs 15ACW-12 "Union Infantry Marching / Backpack," 15ACW-01 "Union Officers," and 15ACW-03 "Union Standard Bearers."  I cut away the cast flag poles, drilled out the standard bearers' hands, and added some brass rod.  Bases are Litko, which they custom cut to 25mm by 15mm.  The flags are from GMB, and they are beauties.

Here are the rest of the Achaean foot, finished yesterday.  There are eight archers in two poses and two heroes on circular bases. 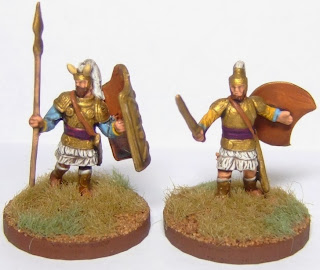 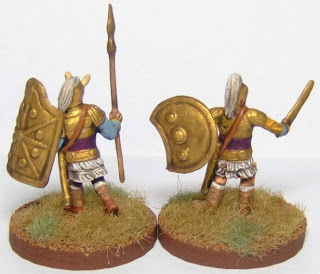 I have four chariots to add to these armies.  I spent yesterday assembling them.  Tomorrow I'll prime them, then try to knock them out before the weekend is over.