This week I finished off the 32 Caetari in Glenn's Carthaginian army. These figures are all from Renegade.
I painted these troops with duller tunics than the Scutari, figuring that the Caetari would come from the poorer classes. The shields are smaller, which gives me a smaller canvas for fancy designs, but I think I was able to make them bright and interesting. 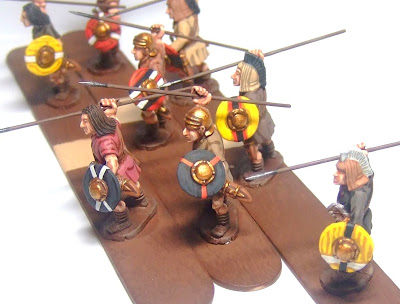 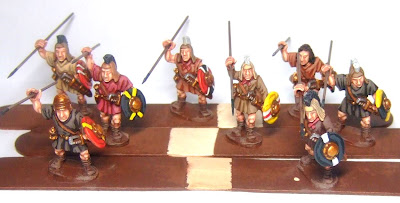 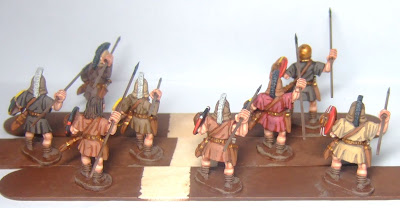 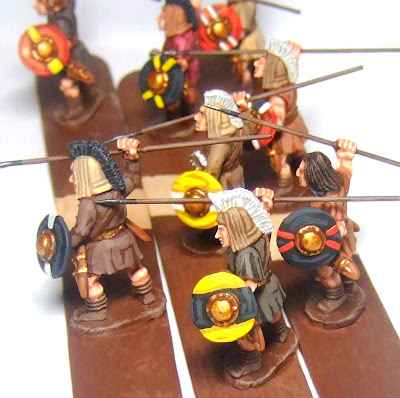 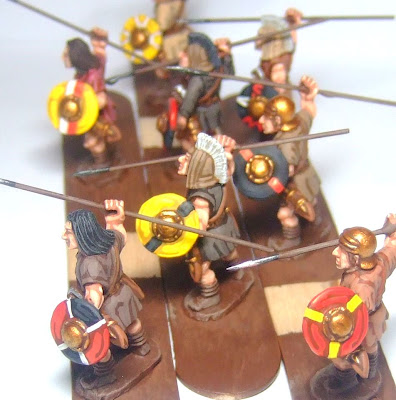 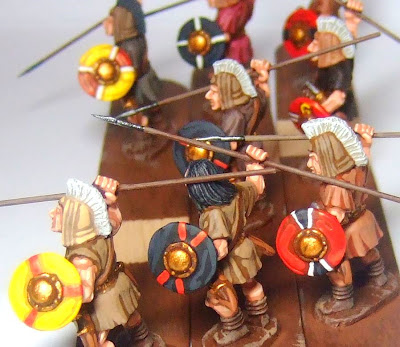 The Rest of the Scutari

The last of the scutari are now done. The spears are all from Northstar. I used five minute epoxy to join the spears to the hands. The epoxy leaves some unsightly bulges, but nothing too extreme. And these spears will never be locked loose by a clumsy gamer. 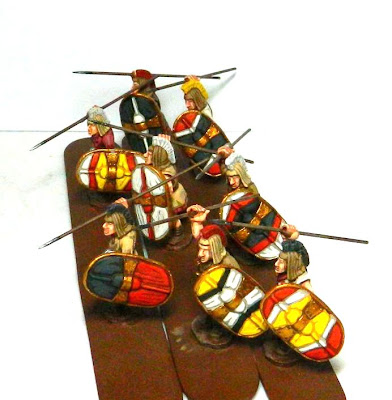 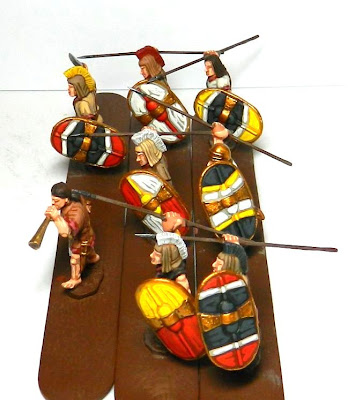 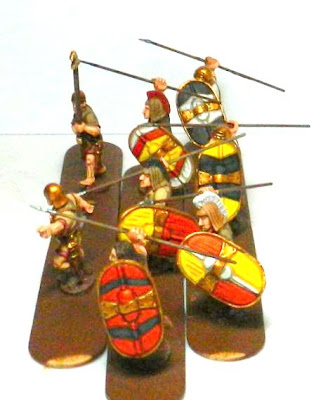 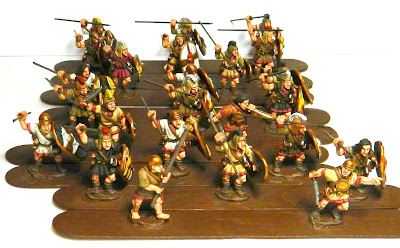 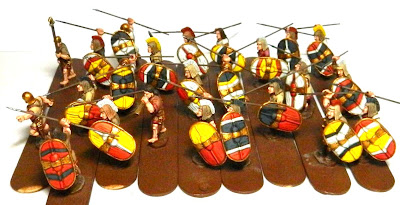 Now I'm prepping the next batch of Spanish: caetari, cavalry, and skirmishers.
Posted by Scott MacPhee at 8:57 AM 8 comments:

Progress is slower than I would like, but the next batch of scutari are done. I should have some pictures of the spearmen tomorrow. 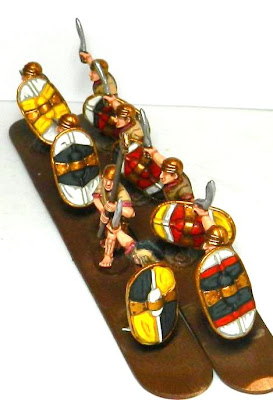 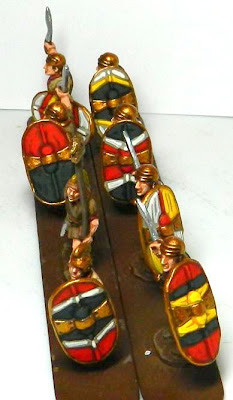 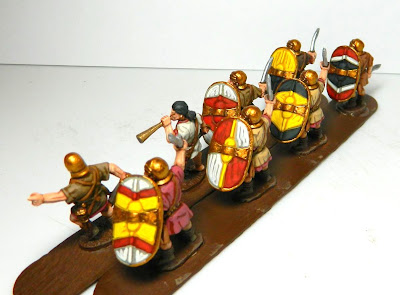 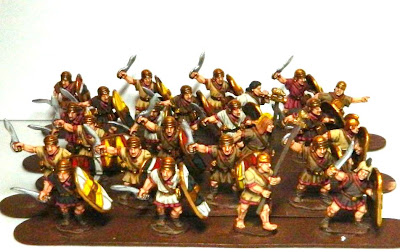 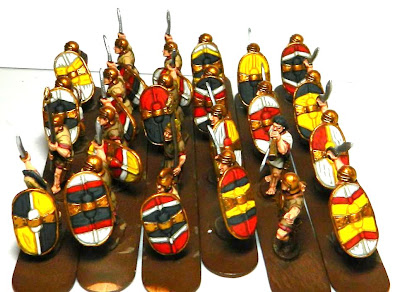 The local paper covered last weekend's model show, and looks whose figures (and whose bald spot) are on the front page! 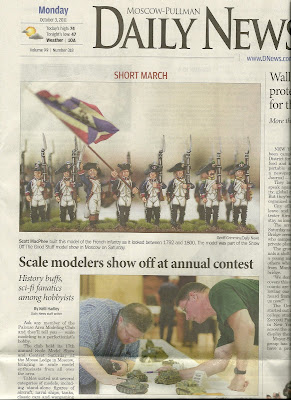 Once again I loaded up my car and drove to Moscow for my local club's model show. This was a pretty unproductive year for me, I'm afraid. Last year I entered six tanks and a diorama, while this year I didn't finish a single model. Still, I did have some wargaming miniatures to show off.

Fife and Drum AWI
I figured the Fife and Drum figures would be good for this crowd, since most of the figures they see are scale models rather than wargaming figures. I got a gold ribbon for these troops.

Field of Glory Romans
I finished my Roman army this past winter, so I was able to display the whole group. These figures won a gold ribbon and the "Best Wargaming Miniatures" plaque. 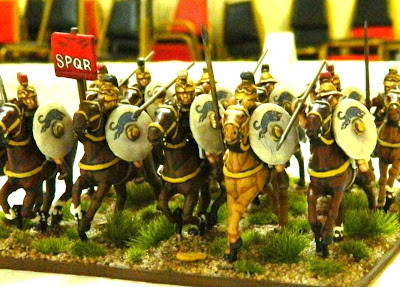 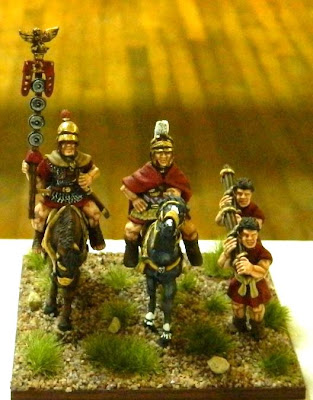 French Revolutionary Wars Infantry
I spent most of last week putting the finishing touches on this group, and these figures received most attention from the crowds. I've pretty much fallen in love with this range, so it was nice to see that other people appreciated them. These figures also received a gold ribbon. 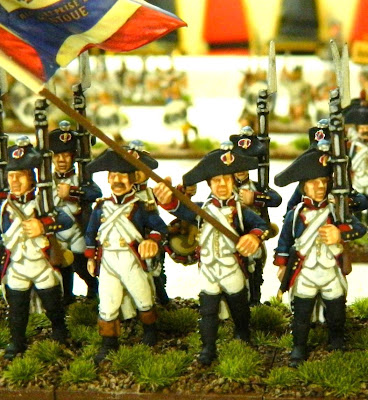 This standard bearer also won a plaque for "Best Single Figure under 60mm."

I brought my Blue Moon Confederates. It's interesting, after all the fuss and bother over these figures being 18mm rather than 15mm, that most people took a quick look, said "they're so SMALL!" and walked on. I got a gold ribbon for these too.

One of the crowd did take a long look, turned to his buddy, and said, "that's an insane amount of detail for such tiny figures." 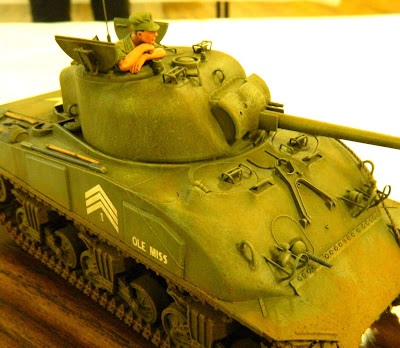 Don's Sherman
Don, a member of our gaming group, won three plaques for this one model: "Best Sherman," "Best Allied Armor," and "Best Armor." It's a Dragon model of the Composite Sherman. I believe the Marine Corps tank commander is from Warriors.
Posted by Scott MacPhee at 2:59 PM 7 comments:
Newer Posts Older Posts Home
Subscribe to: Posts (Atom)