Glenn's army will have one unit of Celt-Iberians. These excellent figures are from Crusader. 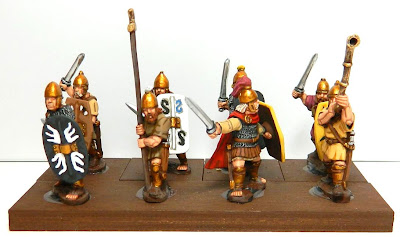 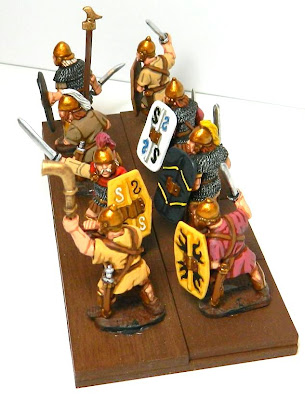 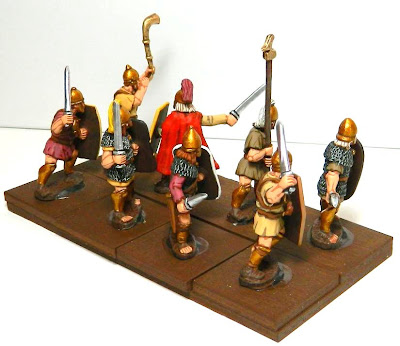 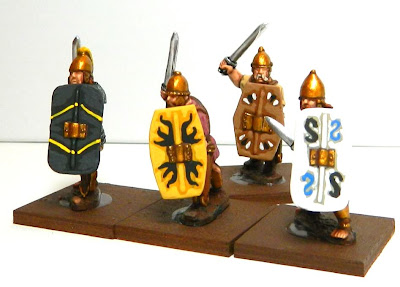 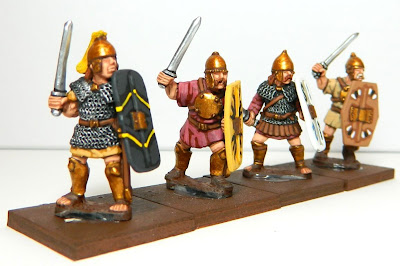 I tried to use a mix of the Celtic and Spanish colors from the previous batches of troops. I'm very happy with how these turned out.
Now I am working on nine units of Libyan spearmen.
Posted by Scott MacPhee at 5:45 PM 9 comments:

Today's mail brought a package from On Military Matters. I have been building British and French armies to play all the General de Brigade scenarios from the Peninsular Wars. It seems others have had the same idea, because Partizan Press has released a scenario book focusing on this interesting theater.
Other General de Brigade scenario books have been all over the place, skipping from theater to theater and period to period. A book may start with a scenario in Italy in 1800, move to Spain in 1807, dip its toes in Bavaria in 1809, trek eastward to Russia in 1812, follow Napoleon back to Germany in 1813, and end up in Belgium in 1815. Just those five scenarios require three different French armies, two different British armies, Austrians, Bavarians, Prussians, Russians, and Dutch-Belgians. That may work well for a dedicated club where everyone has his own Napoleonic era army, but for a smaller group like ours it just ensures that most scenarios never get played.
By focusing on one theater over a six year period, this scenario book makes itself much more useful to the gamer. You can start with a strong core of French and British infantry, which will allow you to fight the smaller battles, then add on as needed for the larger ones. 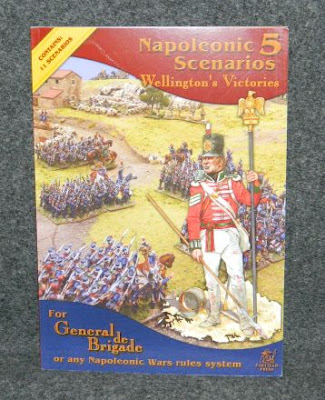 The first two scenario books were pretty simple affairs, with black and white cardstock covers and black and white pages that looked like they had been photocopied. The third scenario book had a spiffy full color cover, but the inside was more of the same. This book fits right alongside the new deluxe edition of the rules. Every page is in full color, there are many pictures of beautifully painted miniatures, and there are even some uniform plates. 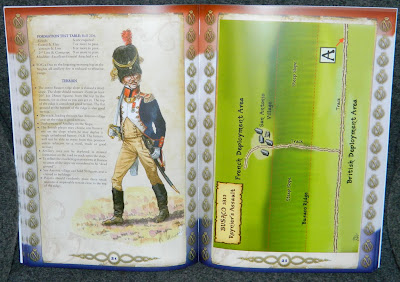 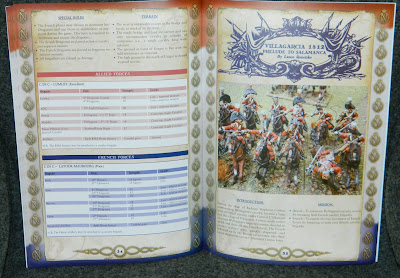 As you see from the list above, there is quite a bit of variety in these scenarios, both in size and the details of the engagements. Some of the scenarios may work with 28mm miniatures, but most seem designed for 15mm. I don't know anyone who could field 690 French infantry in 28mm! With 15mm basing, the scenarios are designed for a 4' by 6' table.
This is one of the better scenario books I've seen, and I've seen quite a few. For an outlay of $30, this should keep me busy for some time. If Partizan ever publishes a similar scenario book for the 1809 campaign in Austria, the rest of my miniatures will go into storage for a few years as I paint and play my way through every battle.
Posted by Scott MacPhee at 1:44 PM 4 comments:

This finishes the Numidian contingent of Glenn's army. All the figures are Relic except for the general, who is from Crusader.
I was doubtful about the Relic figures. I've liked most of their line, but I thought these Numidian horsemen looked a bit off with their fringed shirts, but I was pleased to find that they painted up very well. 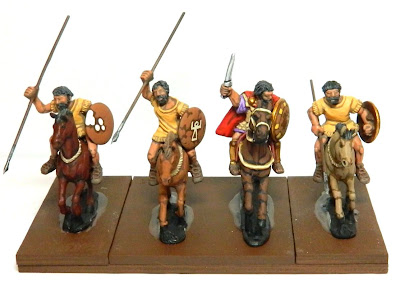 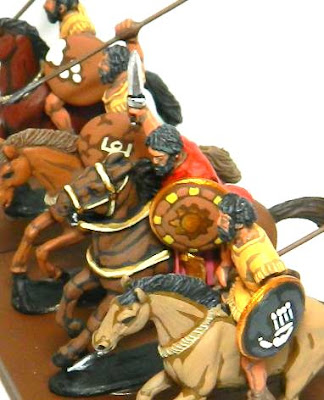 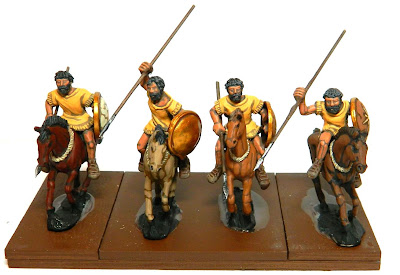 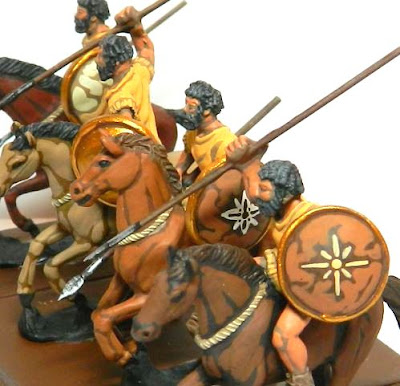 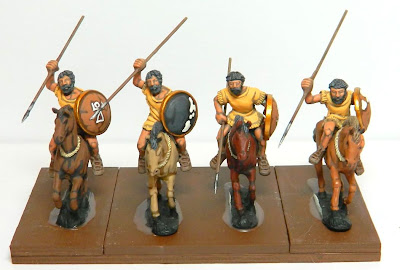 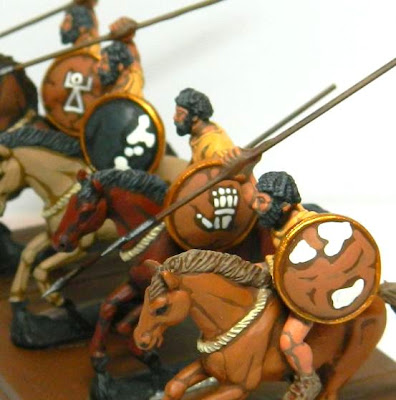 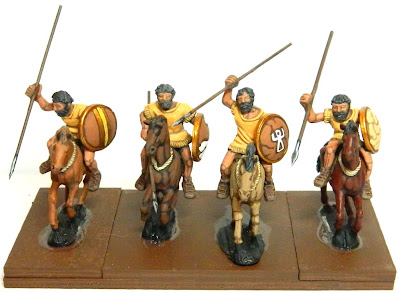 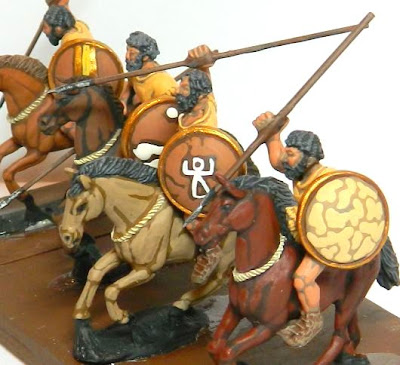 I'm putting the finishing touches on a unit of Celt-Iberians today, and then I'm starting on a huge group of Libyan spearmen. I'm hitting my stride now.
Posted by Scott MacPhee at 9:26 AM 7 comments:

Update: Sold!
http://macpheesminiaturemen.blogspot.com/2011/03/15mm-awi-armies-for-sale.html
I put these pictures up in March and had a few nibbles, but no one has sprung for the whole deal yet. If you're interested, you can reach me at smacphee at yahoo. If you know someone who may be interested, please send them to the link!
Posted by Scott MacPhee at 12:21 PM 3 comments:

The latest batch of units are ready to join Glenn's army. These are Numidian javelinmen. 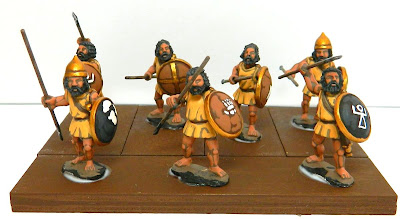 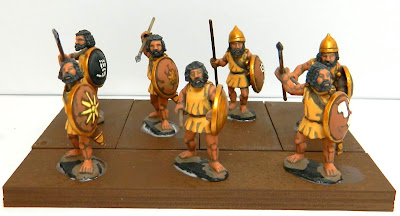 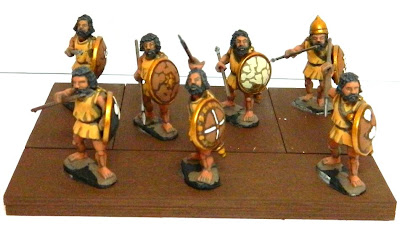 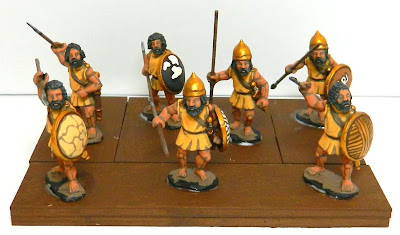 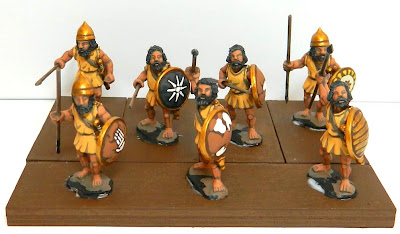 All the figures are Renegade with javelins from North Star. Shield designs are all hand painted.
Posted by Scott MacPhee at 10:21 AM 4 comments: 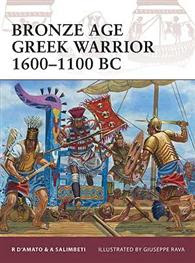 Image taken from Osprey's website.
I've been laid up this week after surgery on my ankle, and I used the time to catch up on some of my reading. The first book on the stack was this entry from Osprey's warrior series.
I picked up this book after reading an altercation on TMP over the artwork. I have a long standing interest in all things Greek, and a series of lectures on classical archaeology (including discussion of Heinrich Schliemann's digs at Hissarlik and Mycenae) whetted my appetite for this book.
The authors stick to the archaeological record, building their case for bronze age life and warfare on the artifacts and linear B texts. I found the artwork to give a reasonable interpretation based on those archaeological finds. You may quibble with the colors of clothing, but the details of arms and armor seem right on to me.
The authors maintain a website which lays out the evidence in a little more detail, but the Osprey is a nice summary and well worth a read.
I was surprised at how little time the authors spent on the Trojan war. They deal with the evidence in about a page and a half, which is appropriate considering how little actual physical evidence there is for a great siege (almost none). Still, most Ospreys are aimed at wargamers and modelers, and they will probably expect more on Troy.
Overall, I found this one of the best Ospreys I've ever read. This is a real scholarly work, and if you have even a passing interest in bronze age Greece, pick it up right now!
Oh, and the lecture series I mentioned is one of my favorites. You can find it here. It's a great series to throw into the DVD player during a painting session.
Posted by Scott MacPhee at 9:53 AM 6 comments:
Newer Posts Older Posts Home
Subscribe to: Posts (Atom)