It has been a few months since I started my 28mm ACW project, and I've found it slow going. I might have spoiled myself last summer with my 1809 Napoleonics, because these Union infantry made me feel like I was painting the same thing. Over and over. Each infantryman has, for example, five different shades of blue.

I finished my last eight sticks of Union infantry today and decided to do some basing. I'm using 3mm Litko bases with a 30mm frontage and a 40mm depth. This way I don't use much more frontage than I have on my 15mm figures, where each base has 25mm frontage. 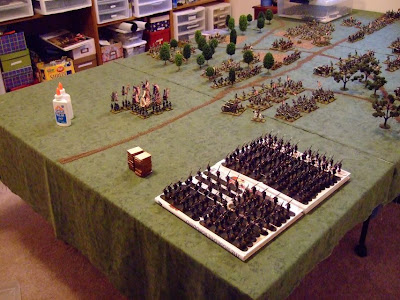 All 212 Union infantry, ready to base
I use Elmer's School Glue to attach my figures to their painting sticks. It provides a good enough bond that they don't fall off, but it's weak enough that I can snap them right off when I begin basing. I use Elmer's Glue All to affix the figures to their permanent bases. I used to use wood glue, but whenever I decided to rebase, I was tearing figures off at their ankles. Glue All allows me to eventually break up the bases if I so choose. 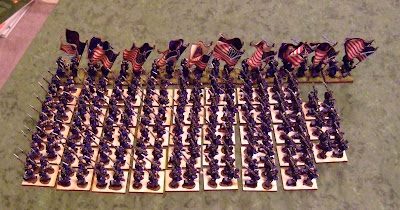 All 212 Union infantry, based
An hour later all the figures were based. I have ten stands of regimental command and 43 stands of infantry. Tomorrow I'll begin flocking the bases, a much longer process.
Posted by Scott MacPhee at 9:22 PM