Painting with My Four Year Old

A week and a half ago I loaded my seven year old son in the car and headed to Seattle for their annual model show.  My four year old daughter was sad to be left behind, but I promised her I would bring her back a present.  I picked up a box of 1/32 scale Marian legionaries from Italeri for her.  We spent the past few days painting up our first figures.

These figures are soft plastic, so model cement would not work on them.  I attached the pila and scuta with five minute epoxy.  I then primed the figures with flat white Krylon plastic primer from a rattle can.

I guided my daughter through block painting the figures.  First she watched me paint, then she copied what I had just done.  It took a few days, but she did a very tidy job blocking in the figure.

We then brushed on some Minwax Polyshades Tudor Satin and gave it a day to dry.  The stain did a very nice job shading the figures.  Then we painted on some flat clear acrylic paint, dullcoated the figures, and based them up. 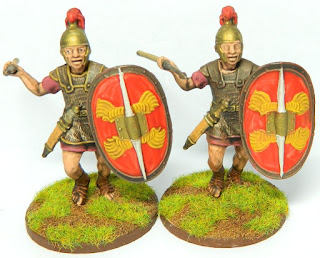 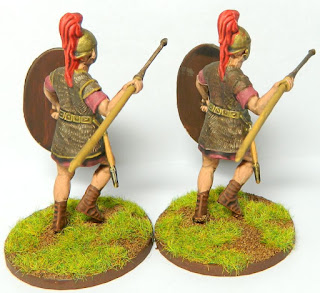 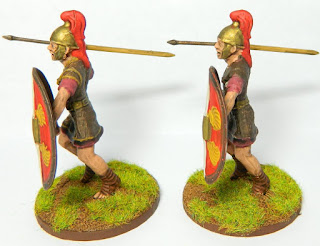 She has painted 1/72 scale plastics, but they did not turn out this nice!  I think some 1/32 scale skirmish gaming is in our future.  Do any of you know of some good rules?  Saga might adapt well to Caesar's Gallic campaign.
Posted by Scott MacPhee at 3:00 PM