Black uniforms are always tricky, but the Brunswick contingent should stand out on the table top.  Glenn will have all three line and all three light regiments in his army. 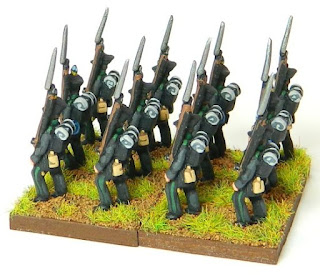 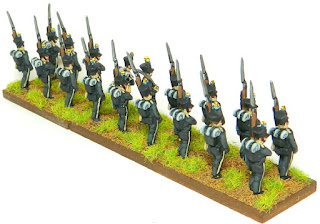 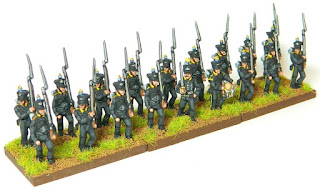 This next week I will add the Leib and Avant Garde battalions.

And now, a word about attention to detail.

One of the hardest parts of painting the Anglo-Allied Waterloo army has been keeping the troops straight.  Glenn's order was huge, and the packages came in several waves.  The sheer variety of troop types is impressive.  Some (few) of the figures came mislabeled, so I have spent a good chunk of time comparing raw lead to the pictures on Eureka's website to figure out just what I have.

I think, and I am sure Glenn can correct me if I am wrong, that I have only made one mistake identifying troops.  In my last post, you may have noticed one solitary stand of the Orange-Nassau regiment did not have shako cords and had shorter plumes.  When I started painting the Brunswickers, I found one six figure stick was, in fact, Orange-Nassau troops that I had mis-sorted.  Of course I painted the new stand correctly.

So what I had painted as Orange-Nassau?  I am pretty sure they were Dutch line infantry in a bag labelled "Orange."  Whoops.  So Glenn will get one extra stand of mis-painted troops (at no charge of course; it's my mistake).

I am on my last batch of Anglo-Allied infantry!  Since I started painting this army in August, I have finished almost a thousand infantry.
Posted by Scott MacPhee at 12:15 PM