What could be a more fitting finish to the giant commission than a vignette of Napoleon himself?  Here he is, surrounded by marshals, staff, guards, and -- look! -- Glenn Drover!

Glenn is at Napoleon's right hand, gesturing with his sword.  Bertrand is directly behind Napoleon.  Favereau is on Napoleon's left hand. 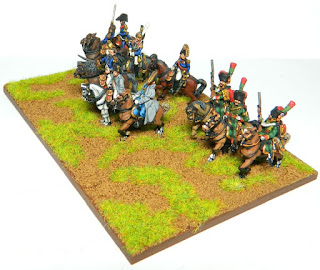 An officer and two troopers of the Chasseur a Cheval of the Imperial Guard keep a wary eye for threats to the emperor. 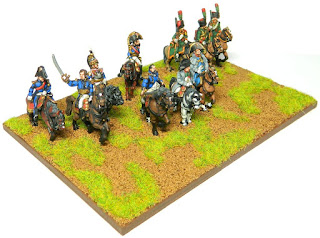 Marshal Ney prepares to order an attack.  Levavasseur is at his right hand, ready to send out Ney's orders.  Hautpoul is dressed in full cuirassier rig on Ney's left hand.  Hey was long dead by Waterloo, but he could be any cuirassier brigade commander.

With this vignette, the giant commission is complete.  Sometime in the next couple of days I will post a retrospective on a project that occupied three years of my life.

But first, a few figures for myself!  The last of my Napoleonic MacPhee figures went on this corps command stand, flanked by two AB Miniatures generals.  I don't know how the fellows at Minuteman Miniatures did it, but they managed to scale PERFECTLY with AB. 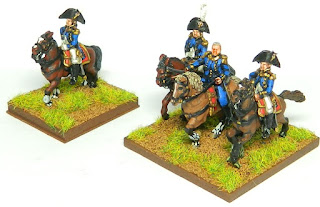 Posted by Scott MacPhee at 5:26 PM