We had our usual painting night on Friday, and Austin had the second part of my TAG order for me, the rank and file Hungarian grenadiers.  TAG has mistakenly included another pack of command instead of a pack of rankers, so I won't be able to paint up my complete four stand unit, but I most likely won't be painting these anyway.  As you can see in the pictures below, the grenadiers experienced significant breakage on their way across the Atlantic. 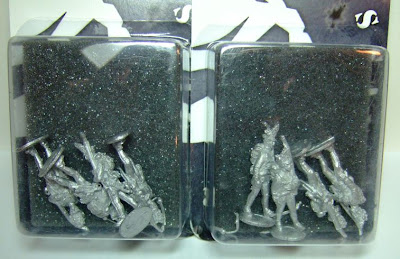 Broken Grenadiers
I appreciate the desire for good proportions, but surely it has gone too far when every single bayonet breaks in shipping.  All eight bayonets!  Six had snapped off completely before ever I opened a blister pack, and the other two were so badly bent that they broke in my hand as I tried carefully to right them.  You can see the base of one grenadier, third from the left, has bent 90°, and this figure would break off at the ankles when I tried to bend the base parallel to the ground.

Blister Pack, Side View
It's not merely the thinness of the figures that is it fault.  The packaging does not keep the figures at all secure.  You can see that the grenadiers have room enough and to spare to rattle around in the blister.  A thicker bit of foam would certainly have helped keep them stationary. 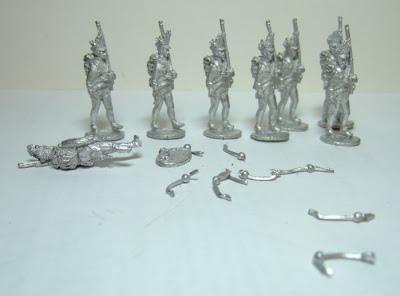 A Sad Mess
So here's what I got for my £16.50.  Eight (not twelve because of the wrong package) broken figures.  I shot this from the side to better illustrate the awkward step I wrote about in the last post.  The two leftmost grenadiers are striding ahead with two locked knees.  I'm not an expert on Napoleonic infantry drill, but I did try walking around my house like this today, and it doesn't work.  Maybe Austrian grenadiers were only recruited from double jointed men, but I doubt this was the actual step employed. 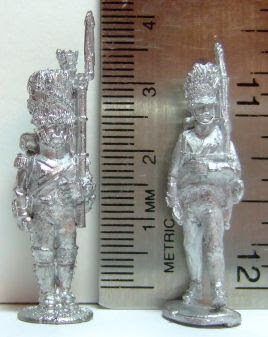 Foundry French Grenadier and TAG Austrian Grenadier
On TMP, Supercillius Maximus writes that, for a fair comparison of the Foundry and TAG ranges, I should not have used a Foundry Russian in greatcoat.  He's quite right, of course.  Here is a Foundry Grenadier a Pied of the Imperial Guard.  The same comments apply.  The TAG figure is much taller and leaner than the Foundry figure, and I wouldn't want to mix these two lines on the table.
I had not recommended the TAG Austrian line because it would not fix with other manufacturers.  But I had qualified my remarks by stating that, when the line is complete, it would serve very well for those who want more life-like proportions.
Based on the horrible breakage in these two packs, I have to withdraw that qualification.  These figures are unforgivably fragile.
Posted by Scott MacPhee at 7:37 PM