I just can't get enough of some figures.  I have Napoleonic French infantry in 6mm, 15mm, 1/72, 28mm, and 54mm, and I keep finding myself browsing 10mm and 40mm, thinking how fun they look.  I have ACW figures in all those scales.  And now I'm finding that Marian Romans are another of these favorite armies.  I already have enough Marian Romans to fight a large WAB or FoG battle, yet I keep buying the things.
When I painted my Old Glory Romans, I had a couple guys email or comment that I should really use Foundry figures for the period.  And I replied that I wasn't made of money, that I should rather spend $90 on OG legionaries than $546 on Foundry.  But I always kept my eye out for any bargains, and through careful attention to eBay auctions, I was able to find 44 legionaries and 10 command for around $1.20 per figure.  It's enough to almost field three cohorts for WAB.

Foundry Cohorts
I already had six 20-man cohorts painted for WAB, all Old Glory figures.  To round out my Foundry cohorts, I'll probably buy one blister pack of legionaries at full retail, just as soon as The War Store gets some in stock.  The Foundry figures are certainly good looking.  The poses are nearly identical, with some variations in armor and helmet, but all the men holding the same pose.  This is my preferred pose for Romans, since it really gives an impression of disciplined infantry.  The command figures are attractive as well.  The cornicens are all the same pose.  The signifers come in two poses, one with the signa and one with the eagle.  The centurions come in six poses, I believe, but I only have two.

Roman Shields
The only thing I didn't like about the Foundry figures were the shields.  They're fine pieces, with good detail, but they come in two varieties, one with a metal rim and one without.  I knew I wanted to use Little Big Men transfers with these figures, but LBM don't make the same design for rimmed and rimless shields.  So I bought a pack of 40 Crusader Miniatures Roman Punic Wars shields for $9.60 and bought LBM transfers for them.  I'm a decent hand at painting shild designs, but LBM exceed anything I can do on my own. 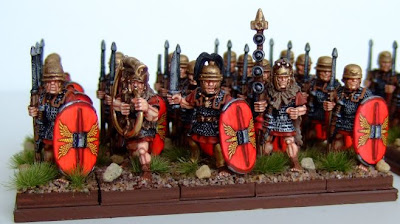 One Cohort of Foundry Figures
Here's a close-up of one of the cohorts.  I don't have round shields for the signifers, and I'm not sure what I'll do for shields for them.  I might see if Old Glory can sell me some single round shields from the Crusader EIR command pack, but I'm not sure even a trimmed transfer will fit on them.  The legionaries are individually mounted on 20mm square Litko bases with a 20mm square Wargames Accessories metal base (much better than the Litko flexible steel) glued to the bottom.  I cut a piece of basswood to 100mm by 80mm and put some sticky magnetic sheeting on the top.  This keeps my figures on their movement tray for my WAB games. 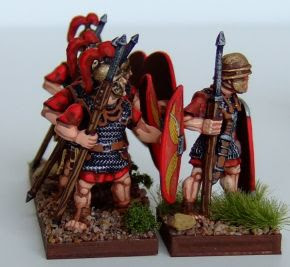 Wargames Factory and Wargames Foundry Legionaries
So how do the Foundry figures compare to my other Marian Romans?  Here they are next to a FoG base of Wargames Factory.  The WFac Legionaries were specifically designed to be compatible with the Foundry figures, and their height and build are very similar.  If you recall my review of the WFac figures, I disliked the shield arms on those figures, and you can see why from this shot.  The WFac figures hold their shields way too far forward for them to rank up well.  WFac would have done better to keep their shield arms as part of the main figure, rather than a seperate piece. 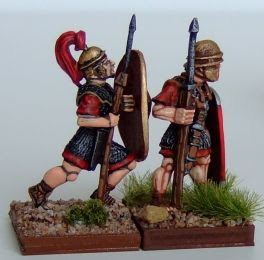 Foundry and Old Glory Cohorts
Side by side, the Foundry and Old Glory units mix quite well.  With nine completed cohorts (well, eight completed and one almost completed), I can field nearly an entire legion.  I think I'll try another range for the 1st Cohort.  Maybe Companion?  If Mark Sims would sculpt some Marian legionaries for his Rank and File line, I'd jump all over those.
Posted by Scott MacPhee at 11:05 AM