Next up is one of two skirmish infantry units in my Field of Glory Carthaginian army: Balearic slingers.

The figures are all from Crusader Miniatures' ancient Spanish slingers pack. There are four poses in the pack. Each pack contains eight figures, so although this unit is six bases in my army, I went ahead and painted all eight bases.
The Crusader figures were decent enough, which is probably all you can ask for with slingers. They're not the most visually impressive figures in the army. I decided to paint the men in plain tunics of undyed linen, with the exception of the one figure who had a sculpted collar. If I do another unit of slingers, I may vary the tunic colors and paint some designs on them.
Here are some closeups of the four poses. 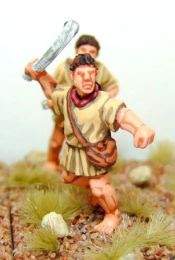 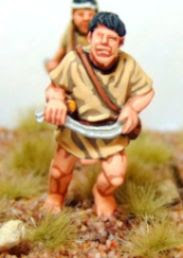 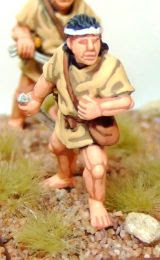 By way of comparison, here are some Old Glory Balearic slingers I painted about five years ago. The sculpts are pretty ugly, but the sculptor did include some more interesting details. I prefer the Crusader slingers, but the OG figures do have a certain homely charm about them.

Posted by Scott MacPhee at 7:24 PM