When Old Glory announced that they would be releasing a 15mm Civil War range under their Blue Moon brand, I gave a mental shrug and moved on to more interesting things. There are already at least a dozen quality Civil War lines, and I doubted that anyone could improve on the AB / Battle Honors figures.
When Old Glory released the first pictures of the sculpts, I started to take more notice. These figures are very similar in style and overall look to the fantastic Sash and Saber 25mm figures. Old Glory had hooked me again. I renewed my army membership and ordered some samples. Of course, this being the Civil War, my favorite gaming period, my "sample" order consisted of over 400 figures.
I started in on pack 15ACW-18 "Confederate Infantry Marching / Blanket Roll." Each pack has 30 unique figures, and I started with four packs.
Civil War uniforms are not too interesting, at least when compared with Napoleonics or ancients. I usually put a basic block paint job on my 15mm Civil War figures, saving the detail work for their faces, hands, and muskets. I thought these Blue Moon figures called for some two tone work, so these took much longer to finish than usual. 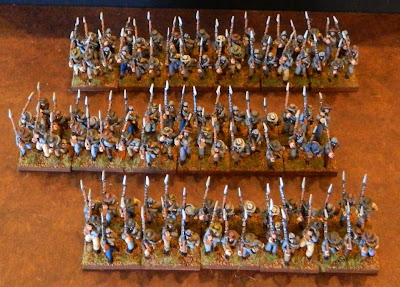 Having spent the past two months with these figures, I am sold. They absolutely look the part. The men are almost in step, with most leading with their right feet. The poses are similar enough to work as a unit, but distinct enough that each man is an individual. This sculptor knows his business. Faces and hands have excellent relief, equipment is accurately rendered while still large enough to paint, and the uniforms have realistic folds.
Some talk on TMP expressed concern that these figures, at 18mm, would tower over 15mm figures. We have been pretty lucky with Civil War figures. Most of the ranges are perfectly compatible, although a few outliers are either giants or pygmies. So how do the Blue Moon figures compare?

Left: Old Glory (again, shorter bases) Right: Blue Moon
None of the other manufacturers look out of place next to the Blue Moon figures. The Blue Moon figures are slightly taller and bulkier, but I will have no problem mixing these units on the gaming table.

L-R: Stone Mountain, Blue Moon, Minifigs, Blue Moon, AB / Battle Honors
Mixing the figures within the same unit is another story. The Blue Moon figures are a little too big for that.
Posted by Scott MacPhee at 3:37 PM