I haven't had much time to myself since school started up, but luckily I am able to combine work and play with this project.

I am teaching Ancient Literature for the first time this year, and the reading schedule is ambitious.  We started with The Epic of Gilgamesh, moved on through some of Plutarch's Lives, and then tackles The Iliad.  The kids have a quiz tomorrow over book 18.

Of course this book of bloody battle has me itching to revive my school's gaming club.  I bought a few boxes of Caesar's Trojan War figures in 1:72 scale, a cheap entry to a new and interesting period.

The figures are actually pretty good.  They are not metal figures, by any means, but they do have nice proportions, and the equipment and clothing looks spot on for the period.

It has been a looong time since I have painted any soft plastic troops for myself, but I do remember a few old tricks to keep the paint from flaking.  I've also learned a few new ones over the years.

First, I cleaned all the figures with liquid dish soap and hot water.  This washes off the mold release agent and gives the primer a fighting chance to adhere to the figure.  Then I primed with Rustoleum flat white plastic primer.  The paint supposedly bonds with the plastic while giving good tooth for the subsequent colors.

I block painted the figures with craft store acrylics.  I don't have a lot of time here, so I banged these figures out very quickly, maybe spending 10 minutes per figure.

Then I brushed on some Minwax Polyshades Tudor Satin.  This both acts as a wash and provides a flexible sealer for the figures.  Even if the plastic bends, the Polyshades should bend with it, keeping the underlying paint from flaking.

This is not quite my first attempt with the dip, but it is my first try in about a decade.  I'm pleased with how the figures turned out.  I won't use the sip in place of my usual style in most cases, but for these quickie paint jobs, it does very well.

I picked up Peter Connolly's The Ancient Greece of Odysseus, which seems clearly to be the source the sculptor worked from.  All my Trojans will have purple plumes and sashes, but other articles of clothing will be varied and colorful.

I painted all the armor with Vallejo's "Old Gold," and that's all I plan to do.  I want the armor to look like straight bronze without ornamentation.  This is the Bronze Age, after all. 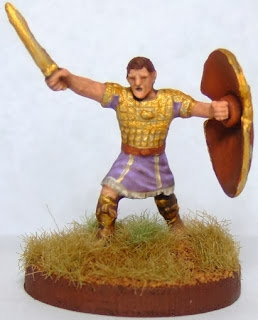 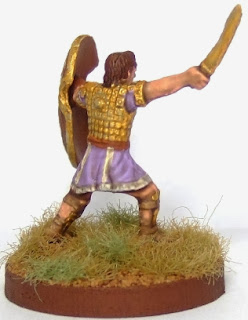 I wanted the two heroes to stand out from the rank and file, so I used Vallejo's "Gold," a much brighter color, for their bronze.  I also mounted them on 1" circles instead of 20mm squares. 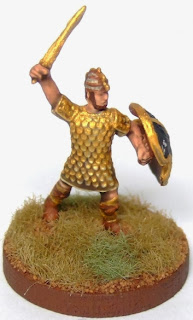 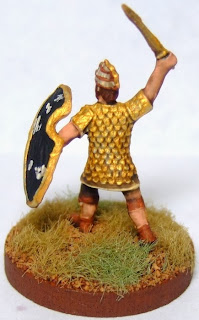 I have not yet found a good set of rules that checks all my boxes for this period, so I probably will end up writing my own.   They have to be simple and fun to hook the kids into miniature wargaming, but they also should have a lot of period flavor.  All of these kids have read The Iliad, after all, cover to cover, and if the fighting on the table top does not match the fighting in the book, I imagine they will be pretty disappointed.

So the project has begun.  I hope to complete my Trojan army by the end of this week.
Posted by Scott MacPhee at 7:19 PM