Show Off the Good Stuff

The blog may have gone dead for a few months, but I have been painting quite a bit.  Since my youngest child is ready to move out of the bassinet and into a bedroom, I have lost the area where I used to take photographs.  A new area is nearly set up, so I should be able to resume posting images soon.

In early October, I entered my newly painted Confederate Army in my local IPMS club's modeling competition.  I had 1,171 total painted figures on display, every one of them from Blue Moon.

Club member Jim Davis, who is a much better photographer than I am, took a good picture of part of my entry. 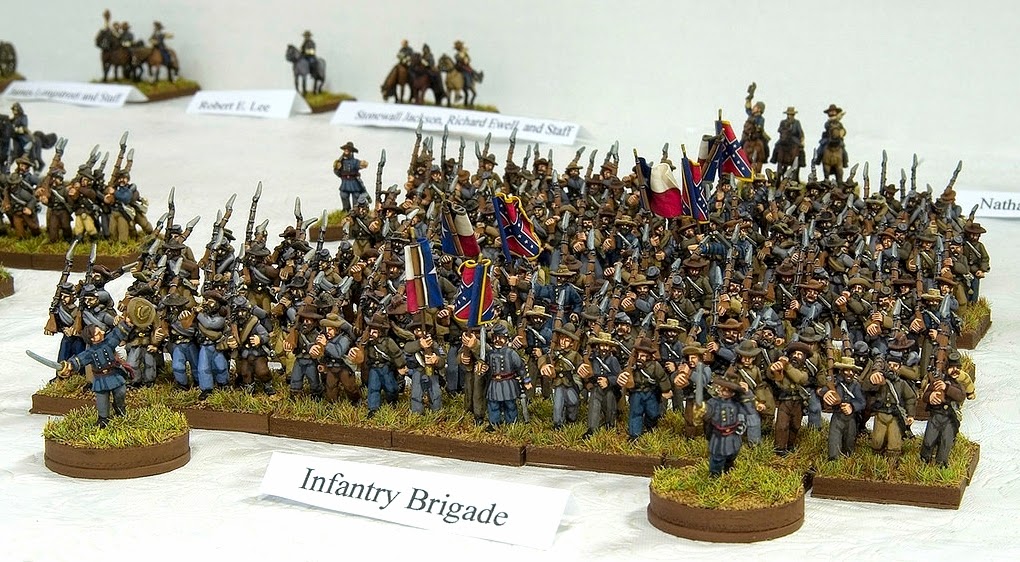 I made up a card explaining my entry:

These are 18mm Blue Moon Manufacturing figures based for Regimental Fire and Fury.  The flags are all from GMB Designs.  Bases are all from Litko Aerosystems, 3mm height, with Wargames Accessories metal bases glued to their bottoms so that the bases will stick to magnetic sheets during transport.

All figures and equipment have two-tone shading.  I used craft acrylics for all the painting except the metals, which are Vallejo acrylics, except for the artillery barrels, which are Testors enamels.

I opted for a “ragged rebel” look for this army, varying the uniform colors between several grays, butternuts, and browns.  I relied heavily on the art of Don Troiani, Keith Rocco, and Mort Kunstler for my palette.  During Lee’s two invasions, Northern civilians described the Confederates as “the most filthy men I ever saw,” “no two dressed alike,” “wearing homespun butternuts and grays,” and “in no uniform dress, but all the shades of soil.”  I painted officers closer to regulation dress.