Here are the 150 infantrymen of the Netherlands.  I was able to finish these figures in just two weeks.  Painting resources are surprisingly hard to find on these troops.  The broad strokes are plain enough, but many of the smaller details (turnbacks, wings, shoulder straps, sword knots) are tough to nail down.

Glenn will have two small battalions of Dutch line infantry.  The flags for all the Netherlands line units are, appropriately, white.

One of the Dutch line bases is a grenadier company.  Some sources showed Dutch grenadiers with a solid red plume, and some showed them with a white plume tipped with red.  All showed them with the shoulder roll.

Some sources showed the Netherlands troops with their own pattern of canteen, colored a mid-grey, but most showed them with British supplied canteens.  That's what I settled on.

I've always thought the Dutch militia looked spiffy in their orange facings.  The half sunburst on the shako front also looks impressive. 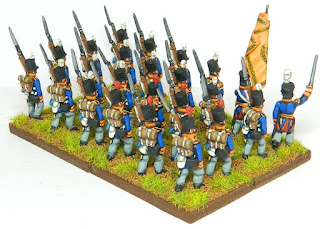 This four base unit includes a base of "flanquers," and I was sorely tempted to paint their plumes a solid orange, as one source suggested.  I settled on the more probably solid red.

The chasseurs fought pretty well in the 100 Days, probably better than any other Dutch force.  This is easily the most visually striking Netherlands unit. 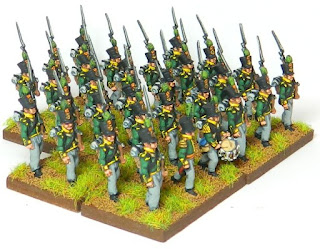 Painting 79 shoulder rolls was a pain, but they look very imposing.

The skirmishers are in only three poses.  Hopefully I was able to create a good look for them by mixing up pose placement on the stands.

The Belgian infantry also look sharp in the Belgic shakos. 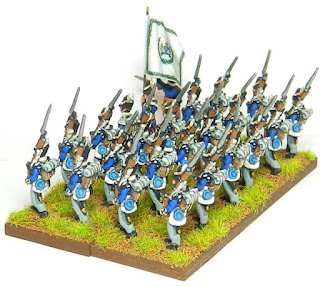 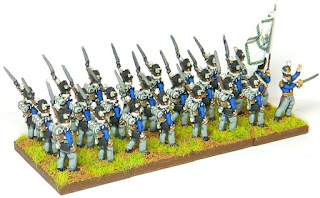 Some sources (Osprey, for example) have white turnbacks on these coats, but red seemed likeliest.

After Thanksgiving, I will start up the Nassau contingent.
Posted by Scott MacPhee at 1:57 PM