I apologize for taking so long to post these figures.  They have been sitting around, painting complete, for weeks, but I had not finished the basing.

The 95th Rifles, thanks to Bernard Cornwell, are probably the most famous regiment of the Napoleonic Wars.  Glenn will have three close order bases and six skirmishing bases in his army. 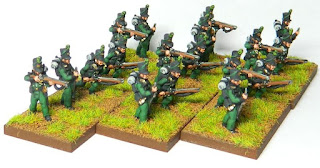 With these two units, the infantry portion of the British and Hanoverian army is complete!

I managed to paint up the entire Dutch-Belgian infantry contingent over the past two weeks.  Once I finish basing them, I will post pictures.
Posted by Scott MacPhee at 2:41 PM