Of course, my army needs commanders. Age of Eagles, my rules set for 15mm Napoleonics, requires division command (1 figure), corps command (3 figures), and army command (5 figures) stands. I have officer figures from Minifigs, Battle Honors/AB, and Old Glory. The OG figures will have to wait another six weeks until I recover from my carpal tunnel surgery. 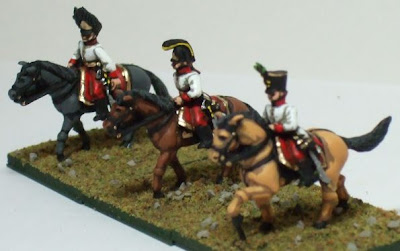 Minifigs doesn't make a set of Austrian generals, as I found out when I bought their "Austrian Mounted Officers" pack. Instead, we get battalion or regimental commanders in the 1798 helmet, the 1806 shako, and the grenadiers' bearskin. Still, they're nice figures, and I needed some generals, so I gave them the cherry red breeches of an Austrian general and made them division commanders. I'm not so sure division commanders wouldn't have worn this headgear, and it's nice to be able to pick out the commanders of my two grenadier divisions on the table. 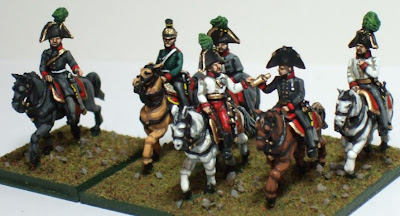 I picked up this set on eBay for $4. The seller had them listed as Battle Honors figures, and they came in a sealed Battle Honors blister pack, but they look identical to this AB pack. Battle Honors does have a set of Austrian generals, but I doubt that they are these figures. Probably my eBay find was a relic from the days when Anthony Barton and Battle Honors were parting company.

This is a beautiful command set. The poses are very natural. I really like the chevauxleger standing by to relay messages. The generals show a nice variety of dress, and they look like they're observing an action from a safe distance.

Size Comparison
Here are some mounted Austrians from different companies. From left to right we have AB dragoons, Old Glory hussars, Minifigs colonel, and Battle Honors/AB general. The AB, Battle Honors, and Old Glory fit perfectly. The Minifigs officer is a little smaller, but to be honest, I hadn't even noticed until I lined them up to take pictures. I have no problem mixing these figures in my army.
Posted by Scott MacPhee at 9:12 AM