These are more figures from my 28mm Piquet project. I painted three foot batteries and two horse batteries. I used Old Glory crew for most of my guns and Sash and Saber for one of my horse batteries. 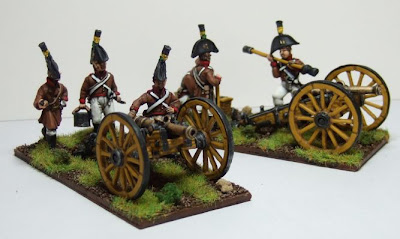 Austrian artillery had yellow woodwork with black fittings. Even the barrels were supposed to be black. I figured that by 1809 these guns would have seen some rough handling, so I drybrushed the fittings silver and made the barrel bronze.

The Sash and Saber gunners are slightly smaller than their Old Glory counterparts, but it's really not too noticeable. The figures are a little better than Old Glory, but again, not too much. I enjoyed painting these a great deal. They're the only non-Old Glory men in either army.

The guns are from Front Rank, the only company that makes 28mm horse guns for the Austrians. They cost $12.50 each, while my Sash and Saber guns cost $12.50 for two. I don't like the guns as well as S&S. They seem a little cartoonish.
Posted by Scott MacPhee at 1:37 PM