When I bought my big box of Old Glory Austrian lead, I bought the personalities pack by mistake. I already had the Foundry Austrian personalities, so I just wanted the run-of-the-mill Austrian generals, not the high command. Once I saw these figures in person, I packed up the Foundry figures and put them aside. These are some of the most beautiful figures I've ever seen. I just wish my painting could do them justice. 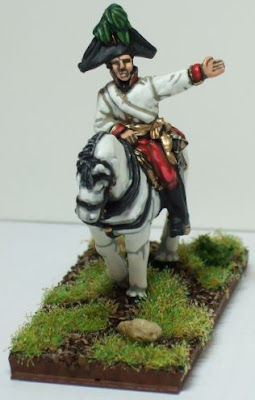 Hohenzollern
This is the standard Austrian dress uniform for Generals. When I first painted this figure, I painted his eyes, but I found that I liked the shaded look better. 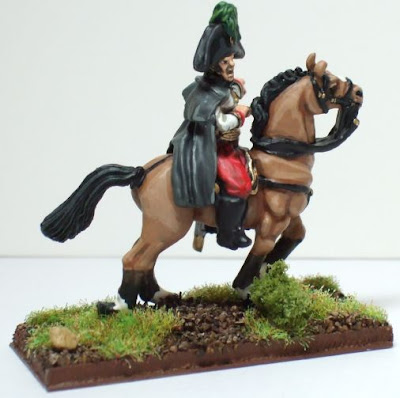 The first of many cloaked generals. The cloaks were a nice break from all the lace and bright colors of most Napoleonics, but it was a challenge to make them interesting. 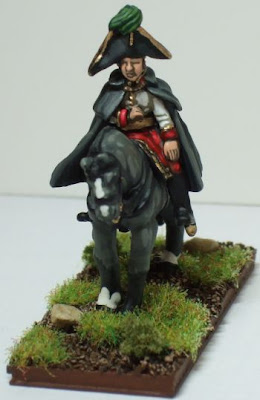 Rosenberg
I love this figure. The drape of the cloak is very realistic. The undercutting beneath the right hand really makes this figure three dimensional. The pose is very realistic. In paintings, generals always balance upon a rearing stallion, gesturing heroically toward the enemy. In life, I'm sure the generals looked more like this: just containing their emotion, staring intently at a contest to see the result. 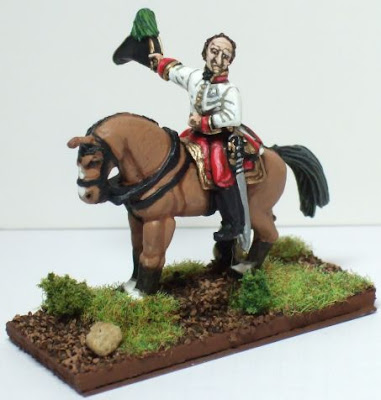 Bellegarde
Here's the heroic pose! This figure would look right at home in any of those romantic paintings. I like this guy too. He really stands out on the table. 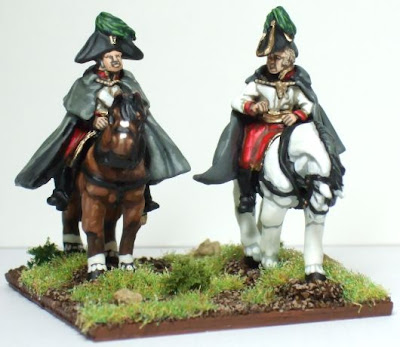 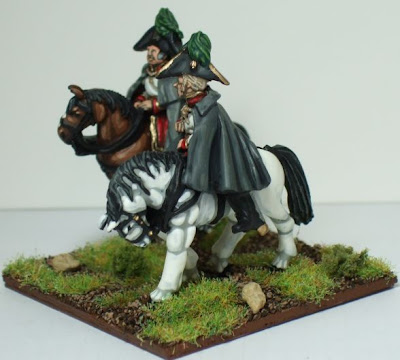 Hiller and Charles, another view
These are two more great figures. Both were very easy to paint. You can see in these pictures how I varied the colors of the generals' cloaks. No two are exactly the same shade, which makes them look a little better as a group. The Charles figure really captures something of the archduke's personality: confident and impatient, perfect for the battles of 1809.

Group Shot
So here they are, the generals for my 1809 Austrians. These army and corps commanders are slumming it up on my table, playing brigade commanders in Nordmann's vanguard.

The mistaken order I made in June has really worked out well for me. I know everyone loves Foundry, but the Old Glory Austrian personalities are better figures than their Foundry counterparts.
Posted by Scott MacPhee at 2:22 PM