My biggest current project is the Austrian army at Wagram for Age of Eagles rules. This is a huge undertaking: 1200 infantry, 162 cavalry, 48 guns, limbers and crews, and 42 mounted officers. Of course, the bulk of the Austrian army are the line infantry in their notorious white uniform. Notorious because they're monotonous and because white is very difficult to paint. 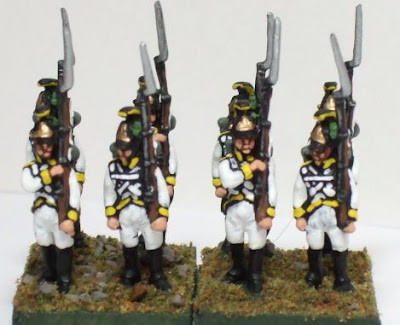 Battle Honors German Infantry
These were my first Austrians, painted a couple years ago. They're lovely sculpts, but you see the problem right away. My standard blacklining technique looks silly where all those straps meet in the chest. They're serviceable as is, but about 60% of my army will be made up of these guys I want my army to look better than this. 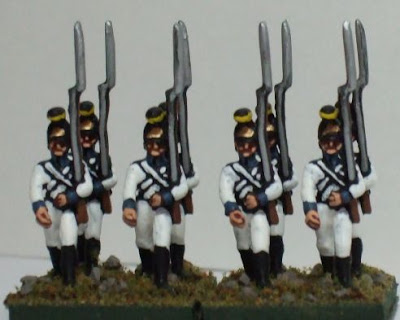 This is more like it: clean, simple, uncluttered. I love Minifigs. They don't have the impressionistic mess on their chest, but . . . although I love Minifigs, these particular figures didn't do it for me. Partly it was the lack of pack and blanket roll. Partly it was the blacklining technique. It just doesn't look good with white. But partly it was the cost. Minifigs are some of the most expensive figures out there. Still, for a few months I fiddled around with these figures, planning on using them for my whole army. As it is, my vanguard and I Korps are all Minifigs. 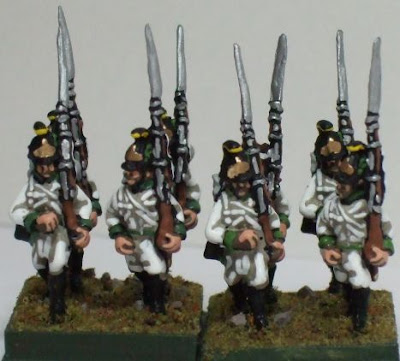 And here is where I had my real breakthrough. I bought some Old Glory and just didn't see how blacklining could work with all those folds. I experimented with painting these as I would a 28mm Austrian: a basecoat of mudstone followed by highlighting with white. They looked great, and because I was just picking out highlights with the white instead of carefully painting neat lines for each strap, these painted much faster than either the Battle Honors or Minifigs.

You know, looking at these images, I don't see that the Old Glory figures are clearly superior. In fact, close up like this, they look the worst of the three. But believe me, on the table, these figures sing. I'll have to find a way to show that in photographs. I think you can get an idea from the group photo below.

Comparison: Battle Honors, Minifigs, and Old Glory
The figures are all pretty close in size. You can see here why I still love Minifigs. Look at the iron discipline! They actually look like trained troops. Imagine how professional a whole corps looks! I'll have to get a good shot of that and post it on the blog.

Pictures like this, and like the comparison of mounted troops below, show how silly that old question is: "Are X's 15mm figures compatible with Y's 15mm figures?" As long as you don't mix them within units, the answer is always yes. And the real noticeable difference here is not in height, but style. The Minifigs are the same height as the other two ranges, but they're clearly more realistically proportioned. 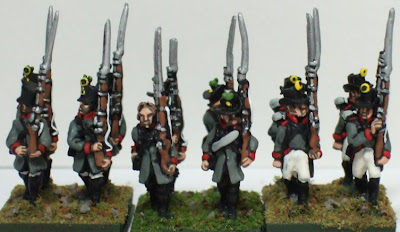 Old Glory Austrian Landwehr
Any 1809 Austrian army is going to need a big chunk of landwehr. Fortunately, they're quick and easy to paint. Old Glory does a nice mix of uniforms for the citizen militia.

As an aside, isn't it funny how seeing figures can remind you of what you were doing while you painted them? I always like to have something on TV or the radio while I paint, and that middle stand was painted while I listened to my alma mater's hapless football team get just stomped. I have a set of 1/35 panzergrenadieren who I painted while watching "Much Ado about Nothing" over and over. Whenever I see that unit, I think of Kenneth Branagh in Tuscany. 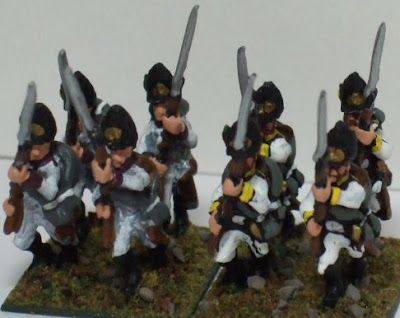 So you've probably gathered by now that I like Old Glory figures. I think they get a bum rap from lead snobs who think that good quality and high price must go together. $.15 a figure? Well, they can't touch my $.72 a figure ABs!

I always wonder how these people ever afford an army. This Wagram project is already pretty expensive using Old Glory figures. With my special buyers' membership, it cost me $216 for infantry, $115 for mounted figures, $72 for guns, and $144 for limbers. This is a $550 project, and that isn't exactly chump change. With AB, it would cost well over $1400.

And I just don't see a huge difference in quality. The AB figures are very nice. But you know, everyone's figures are pretty nice.

These are supposed to be the elite of the Austrian army, and they're the worst figures of the whole range. Look, part of the reason these look so bad is because I was experimenting with speed painting. The stand on the left got grey primer (I usually use black) with a drybrush of white to pick up the detail. The faces are just a blob of flesh paint. But I tried hard on the stand on the right. The figures are so bad, it didn't make much of a difference. These big, burly grenadiers are actually shorter than the Old Glory German line.

So I've pretty much decided to go with AB for my grenadiers. It'll cost a whole lot more, but for four elite brigades, it's probably worth it.

"But Scott," you might be thinking, "that's a good wargame standard paintjob. And those figures don't look so bad. I'd be glad to play a game with those."

Well mister, you're just the man I'm looking for. Leave a comment, drop me an email, or just shout really loud. Get in touch with me somehow. Because I'm more than willing to sell these figures off. I haven't sold any of my painted figures for a long time. But for these guys, I'm willing to resurrect the practice.
Posted by Scott MacPhee at 9:50 AM