Since then, I've been working my way through this enormous pile of lead. I traded some Austrians for some OG ACW figures, and I sold a few bags of Prussians, but I kept the vast bulk of them to paint myself. I'm more than halfway through now.

I know a lot of gamers don't like the Old Glory Napoleonics, and I have to admit that, after painting quite a few AB figures over the past few months, I'm edging ever closer toward lead snobbery myself. Still, the Old Glory figures are perfectly serviceable as wargaming pieces, and there are some real gems among their extensive line.

This bag is one of the good ones. At the beginning of August, I finished painting my Old Glory French in full dress at road march. I was planning on putting a quick, down-and-dirty paint job on these figures, but halfway through I decided to go in whole hog, using my two-tone white technique and even painting the red edging on the lapels and turnbacks. These 96 figures took just over 20 hours to paint. 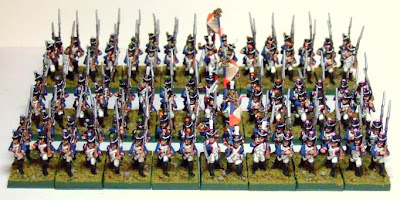 96 OG French (click on any picture for a larger image)
They're not quite up to AB's standard, but they do look very nice. I've had some problems with OG and Battle Honors flag poles bending or breaking, so I drilled out the eagle bearers' hands with my pin vice and replaced the lead flag staffs with .020 brass rod. The I cut off the eagles, drilled a hole in their bases, and attached them to the brass rod as well. 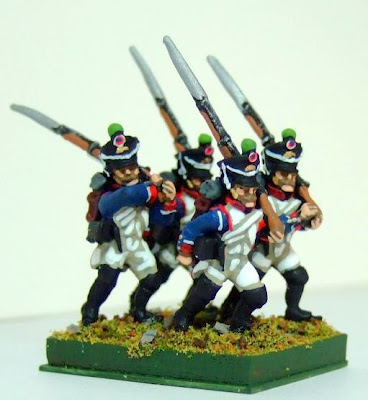 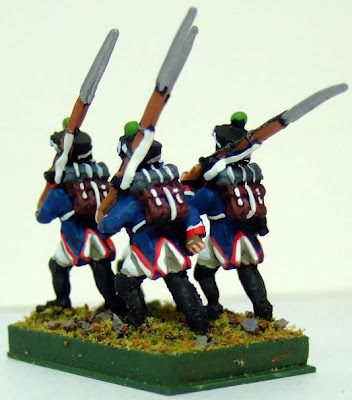 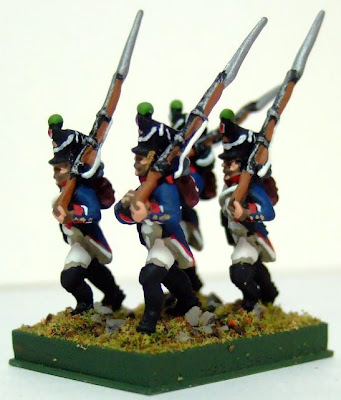 All my 15mm French Line
All my Napoleonic infantry get 3/4" x 1" bases for Age of Eagles. This basing also works for my tactical rules of choice, General de Brigade. I glue Wargames Accessories metal bases to the bottom of my Litko wood bases so that the figures will adhere to my magnetic sheeting for travel. I glue the magnetic sheeting to two 1' square floor tiles to give the whole thing a little stiffness. The 1' square tile rests firmly in a 12" plastic drawer, three drawers to a unit. It's a great way to get figures from place to place without breaking or bending them. 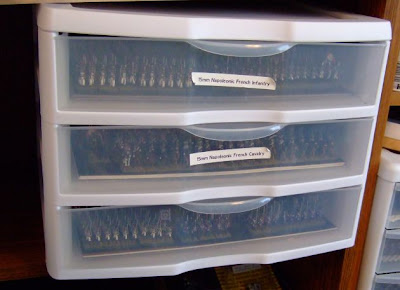 The big box o' French
As I looked over my French, I realized that I have painted figures from nearly every Old Glory pack. There aren't a lot of pictures of Old Glory figures on the internet, and 19th Century Miniatures seems unwilling or unable to give examples of their line, so you might enjoy seeing what different Old Glory packs look like. 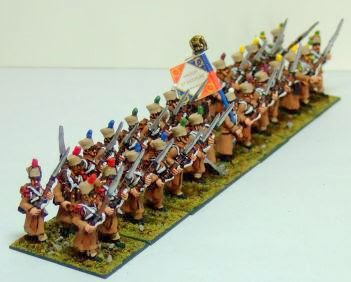 French Infantry in Greatcoats, Defending
My haul from Wally included three bags of French in greatcoats, one of fusiliers, one of elites, and one of command. I have about 40 painted bases. As you can see, I went with brownish greatcoats rather than grey (too boring!). Old Glory's idea of "defending" looks an awful lot like "advancing" to me, but here they are. These troops are seasoned veterans, having seen action in almost every Napoleonic game I've played. 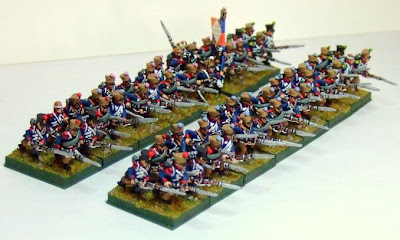 These figures did not come from Wally, but from my friend Austin. He bought these before he erupted in full-on lead snobbery, then decided that they weren't worth painting. The figures are fine for my purposes, although their protruding bayonets make them difficult to rank up. I still have a couple hundred of these left to paint.

Old Glory French in Campaign Dress, March Attack
These were the first 15mm Napoleonics I painted. I think I finished these during the summer of 2000. Of all Old Glory's French figures, these are my least favorite. They have that infamous scurrying quality to them. Some of the bases are so small that it took some creative glue work to get them standing upright.

Old Glory French Infantry, Comparison Shot
Old Glory has some trouble getting consistent styles from their different sculptors. The charging and greatcoat figures are noticeably smaller than the others, while the full dress figures stand very tall. Still, as long as you don't mix these figures within units, they do make for a nice mix of troops on the tabletop. I usually field all of one type within each division, which does make it easier to identify commands on the table.
Posted by Scott MacPhee at 10:49 AM