I am back to painting for myself, and it feels good.  I grabbed the nearest primed figures from my workbench, a set of nine French skirmishers in 28mm that I primed four years ago for Jon's Maida game and never got around to painting.

After concentrating on quality for nine months, I opted for speed for this batch.  I painted these nine figures in just under 90 minutes, which is a pretty good pace.  Some of the finer painting is a little sloppy, but these will look great on the table.

All figures are Front Rank. 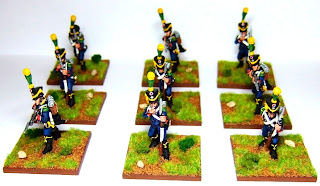 Delta Ceramcoat occasionally stops production of some of my favorite colors.  For years I have used "Manganese Blue" as my shade tone for French and ACW Union uniforms, but Delta stopped making it.  I switched to "Prussian Blue" for this batch, and I think it works well. 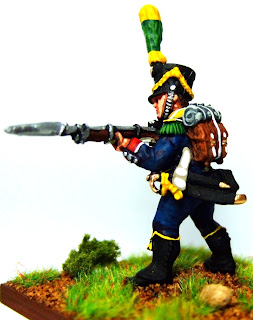 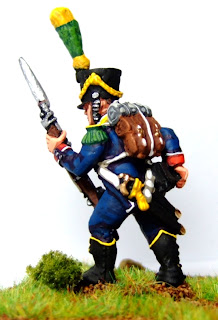 I tried out a new flesh shade tone, Delta's "Ginger Spice," and I like it.  Their "Dark Flesh" is still my go-to color for flesh shade, but it doesn't give quite enough contrast with "Medium Flesh" all by itself.  I end up applying a straight "Fleshtone" highlight to increase the contrast, but I did not want to use three different flesh colors on these figures.  "Ginger Spice" and "Medium Flesh" work very well together. 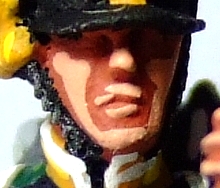 Posted by Scott MacPhee at 8:10 AM