Of these ten generals, eight commanded a Union army during the war.  I just do not need that many army commanders, so I based most of these as brigade commanders for Regimental Fire and Fury.  If I decide to play a scenario where I really need a command base with one of these figures, I can always rebase. 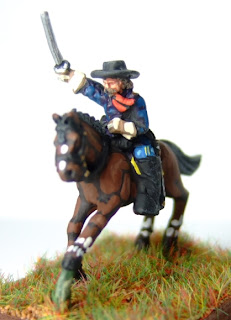 This may be my favorite figure of the bunch.  It could be no one BUT Custer.  Every time I look at this figure I think, "someone is going to die!"  See?  Custer.  I imagine this figure will get on the table whenever I field any cavalry.  I was tempted to give him a light colored hat, but I stuck with regulation black. 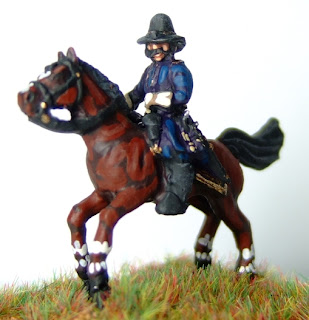 I think this is my third Burnside.  He is very distinctive looking.  That hat and those whiskers do all the work. This is a very undramatic pose, perfect for Burnside.  Now does he look like a London cop from the 1880s, or did London cops in the 1880s look like Burnside? 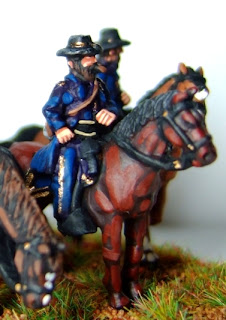 Grant sits very firmly, very erect.  He has a cigar in his teeth.  He looks very determined.  He looks, in fact, like the boss.  This is the best lead depiction of Grant that I have ever seen.  The body language is perfect.  I picked out a horse that matched Grant's attitude.  So far as I can tell, Cincinnati had no blaze and no socks. 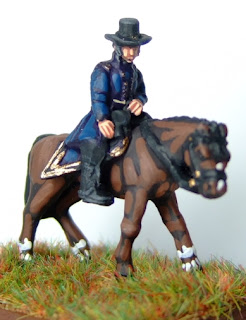 Here is Hooker, riding back over the U.S. Ford.  He already looks beaten, doesn't he?  I like the slouched shoulders, the drooping head, and the slack hand on his thigh.  I picked out the horse that most looked like it was retreating.

Poor Hooker.  I have always thought he was a great general.  He took an army demoralized by Fredericksburg and the Mud March, sick from poor administration, suffering from mass desertion, and he gave it new spirit and new professionalism.  He concentrated the cavalry into a corps.  He moved artillery away from brigade and division commanders and gave professional gunners more of a role in its deployment.  He reformed the signal corps, systematizing telegraphy and intelligence gathering.  He came up with a superb plan to turn Lee from his position on the Rappahannock and crush him.

Then it all fell apart.  I feel for the guy.  He was at times a superb general, fearless and aggressive, but when he most needed his keen killer instinct, something just happened, or didn't happen.

See, now this must be a great sculpt, because it has obviously communicated something about Hooker's story to me. 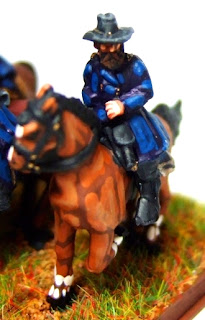 Howard's right sleeve is pinned to his chest.  This is another undramatic figure, perfect for Howard of course, but also well suited to be a generic one armed general. 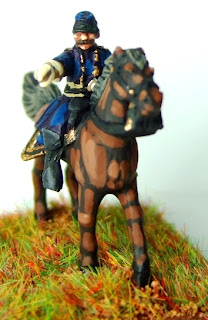 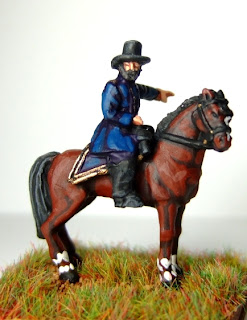 This one is a pretty good likeness.  The upper eyelids are even a little over-sized, something which I am not painter enough to bring out.  He looks competent, if a little plain.  Perfect for Meade.  I imagine him saying, "no, General Sickles, I wanted your corps over there, with the rest of the army.  Idiot." 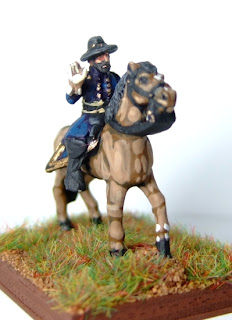 I went back and forth on whether this figure was supposed to be Sherman or Thomas.  Only after I finished painting it did I see that the sculptor has done a great job with Sherman's facial features.  So his hair should be red, or light brown with some red.  Instead I painted Thomas's gray beard.  I have always thought Sherman looked like Clint Eastwood, and this face looks just right. 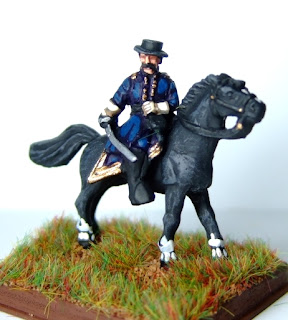 This is another great likeness.  True, most of the work is done by that hat, but the face is right on.  I mounted Sheridan on Rienzi, of course.  It might have been nice to have Sheridan galloping, carrying his headquarters flag, rallying the troops at Third Winchester.  Still, this is a more useful pose, as it could be Sheridan at Pea Ridge, Perryville, Stones River, Chickamauga, Chattanooga, The Overland Campaign, or Appomattox.  The little man sure saw a lot of action.

I imagine I will use this figure to command forlorn hopes.  Sheridan seems to me to have been an awful human being, so I will not be too broken hearted if he dies in battle.  Yes, I am one of those who thinks Sheridan should be exhumed and buried in Laredo, so he can be in Texas and Hell at the same time. 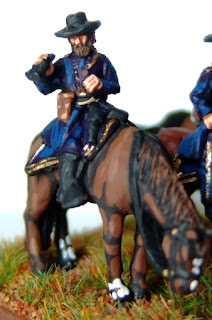 Thomas was a pretty plain looking man, but a big one.  This figure is, in fact, the tallest of the lot.  I painted his hair thinking he was Sherman.  His beard should be shot through with gray.  This is another figure that will work well either as Thomas or as a generic general.  The only thing I did not like about this sculpt is that the binocular case strap just sort of ends on his chest.  Still, this sculptor seems to know what he is doing, so maybe it disappears under a lapel or something, and my eyes are just not good enough to make it out.  I love horses that act like horses, rather than equestrian statues, so this horse, grazing a little, is my favorite of the bunch.

So there we are.  Not just a competent pack, but a brilliant one, with some of the best sculpting I have seen in 15mm.  Not everyone can be Anthony Barton, and these figures lack the clean elegance of some of AB's better sculpts.  But they capture the look, and even better the personalities, of some of the Union's top commanders.