Jon and Austin came over to my place on Saturday for a Napoleonics game using my 25mm figures.  We played a hypothetical 1809 scenario with a large Austrian division (Nordmann's vangaurd) attempting to force a river crossing.
The game was really intended as an intro to the Piquet: Field of Battle rules.  I've played the rules often by myself and found that they work very well for solo gaming.  I hoped that Jon and Austin would enjoy them well enough that we could work some Piquet games into the regular schedule. 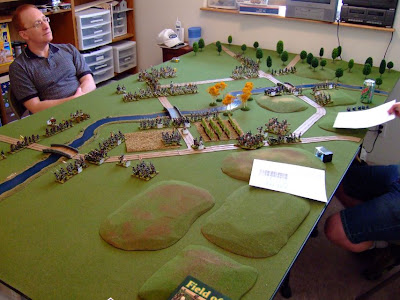 Initial Setup
Jon commanded the Austrians, who had a significant numerical advantage over the French.  But of course, French leaders were rated much higher than the Austrians.  The French had three brigades of infantry, each guarding a bridge, with a brigade of light cavalry in reserve.
The Austrians had four brigades of infantry.  Infantry could cross the river anywhere except the stand of aspens (indicating marshy ground), but cavalry and guns could only cross at the bridges.  The Austrians were to sieze the road intersection in the French rear.  The French were to defend the river line. 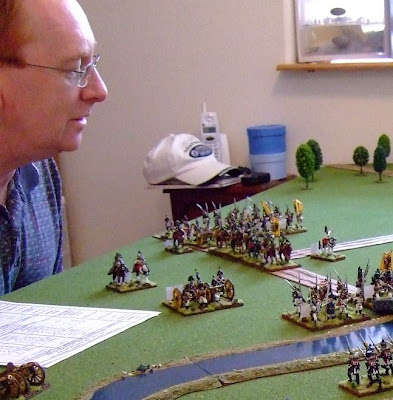 Jon Plans His Attack
Neither Jon nor Austin had played Field of Battle before, although Jon did have some experience playing classic Piquet. 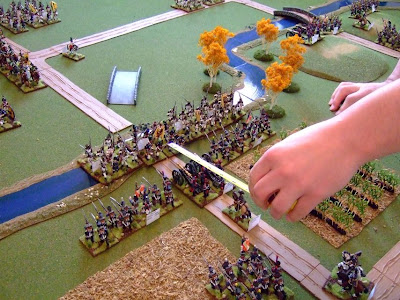 Austrian Attack in the Center
Jon drew a move card and rolled well for his center brigade, allowing three movement actions.  He moved his infantry across the river and attacked Austin's center!  Austin's men opened fire, and smoke puffs began to dot his entire line. 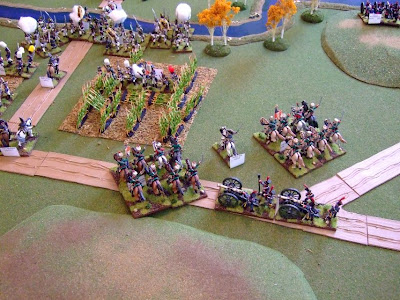 Austrians Smash the Center
Between his fire and his melee, Jon destroyed one French battalion and one battery and sent another battalion scurrying to the rear.  Austin was able to move his cavalry brigade up and attempt to stabilize the line. 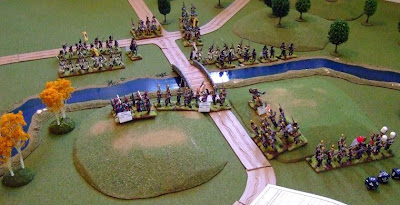 Austrians Attack the French Right
Jon attacked the Austrian right at the same time, using his elite Jäger to rout a French legere battalion.  When Jon attempted to cross his brigade over the river, however, Austin was able to push him back across with moderate losses. 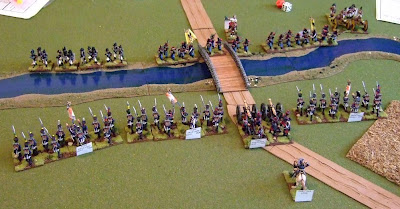 All Quiet on the French Left
Jon rolled poorly for his rightmost brigade.  That brigade leader had a low leadership value and had trouble getting his raw battalions to advance.  Austin's infantry brigade watched them, but no fighting developed. 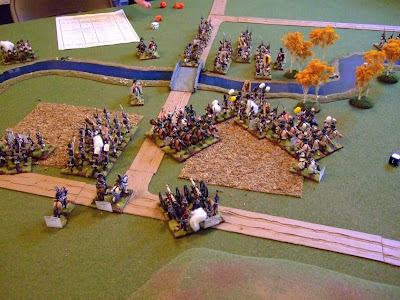 French Counterattack in the Center
Austin's infantry was able to drive off Jon's cavalry with musket fire, and Austin's horse closed on the Austrian infantry.  Jon's infantry was able to check the cavalry charge long enough to form square, and the center settled into apparent stalemate.
After the first turn was over (and I should explain that a turn lasts for the whole of a 26 card deck), Austin and Jon decided that Piquet was not for them, and we went for a bite of lunch.
Yesterday I played out the rest of the game solo, reaching a conclusion in two more turns.  I had the French left charge across the river and assault the motionless Austrian brigade, which was primarily made up of raw Grenzer.  The French destroyed that brigade almost without loss to themselves, then, flush with victory, moved against the open Austrian rear.
In the center, I moved the French horse artillery in position to hammer the Austrian infantry square, then moved the cavalry against the Austrian columns behind it.  The French cavalry, along with the lone infantry battalion left from the center brigade, was able to push the Austrians back across the river.
On the right, I had the French brigade stage a fighting withdrawl, gradually falling back to the road intersection.  The Austrians kept hitting the French, but could never quite deliver a decisive blow.
The game ended when the Austrians failed an army morale roll and quit the field.  Austrian casualties were very heavy, but they nearly succeeded in capturing the French road intersection.  The French held two of the three river crossings at the end of the game.  All in all, the battle ended as a minor French victory. 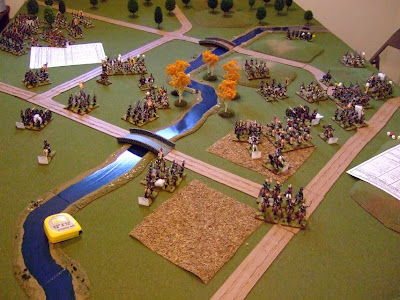 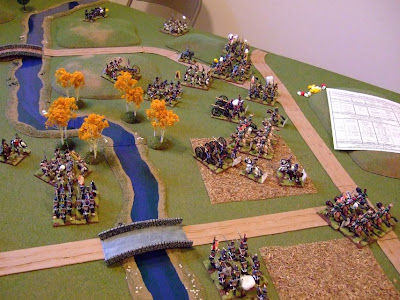 End of Fighting
Because of their higher quality leadership, the French were able to rally off casualties much more quickly than the Austrians, and their brigades were able to deliver some solid attacks.  I'll still keep playing Piquet solo, but the group continues our quest for a tactical Napoleonic game we all enjoy.
Posted by Scott MacPhee at 8:43 PM