In my last post on my evolving Marian Roman army, I asked for suggestions on a manufacturer for my tenth cohort. I got a lot of suggestions, including 1st Corps, Companion, and a number of smaller manufacturers. Fortunately, I found some Gripping Beast figures on eBay for a great price and was able to build my last 20 man cohort from their line.
I painted these figures in fits and starts, squeezing them in while waiting for paints to dry on some late medieval English knights* I'm working on. Yesterday my Little Big Men shield decals came in the mail, and I was able to complete the unit this morning.
*and by the way, if there's a tougher unit to paint than medieval knights, I don't know what it is. I'm doing these for a commission, and they're really outside of my area of knowledge, but even so . . . I imagine that few people have the complex world of medieval English heraldry right at their fingertips. I have to stop painting all the time to look up some obscure heraldic device. Of course, no two figures are alike, so I can't really use my assembly line technique. I've been working on these knights for a week now, and I'm only about halfway done. And the unit is only six figures! 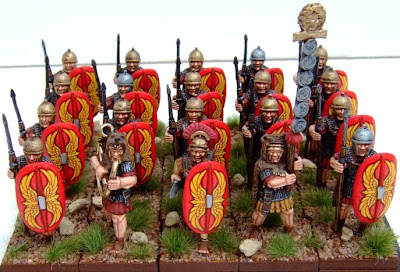 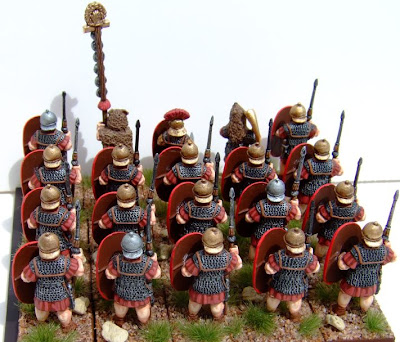 The Gripping Beast figures are tall and slender, with decent proportions. The legs are a little beefier than I would like, and the poses are slightly wooden, but the overall effect is excellent. I might even prefer these figures to Foundry. 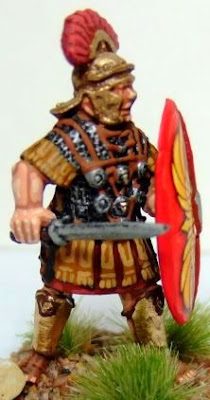 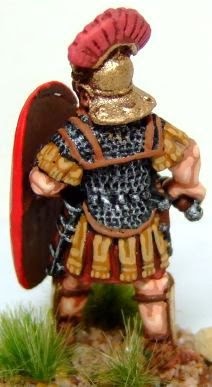 I haven't painted a great many Gripping Beast figures, but when I have, I'm always blown away by the splendid detail. This centurion is a good example. Without any obvious exaggeration, the sculptor has depicted the tassels on the ends of the peturges, the individual feathers on the crest, and the chestfull of medals in a way that really rewards careful painting. The faces on all of these figures are well done, but the centurion especially has a lot of character.
So how does Gripping Beast compare to the competition? I have legionaries from three manufacturers: Gripping Beast, Wargames Foundry, and Old Glory. Here are some side-by-side shots of a similar pose. 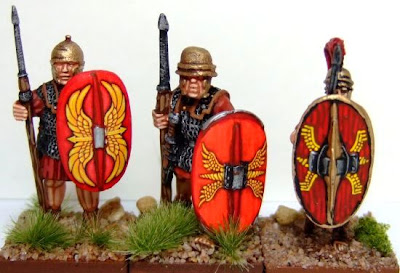 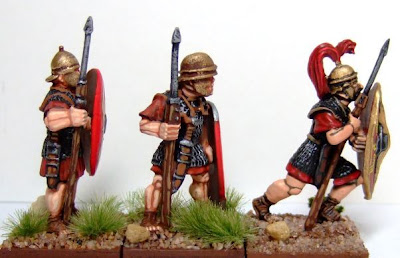 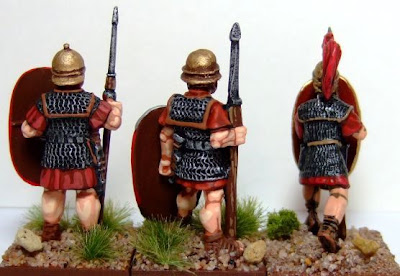 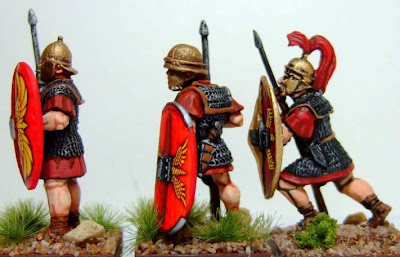 The Gripping Beast figure is the tallest of the three, and in heft he's somewhere between Foundry and Old Glory. The pose looks a little dull on its own, but I like dull poses for my armies because the units generally look good. Soldiers standing in formation do tend to look wooden and static, but this gives the formation a look of solidity and discipline.
The Foundry figure definitely has some odd proportions. The head and hands are huge, and the leg muscles positively bulge. The Foundry sculptor had some odd ideas about Roman helmet patterns, and the typical mount for the plume is missing on all the Foundry figures. I hadn't mentioned it in my review of the Foundry figures, but I do dislike the low position of the shield. All the figures are half resting the shield on the ground. Maybe the legionaries would have stood like this when not in combat. I know I wouldn't relish holding that 20 pound shield up in the air for hours on end. Still, I would like my legionaries to look like they're ready to fight.
The Old Glory figure probably has the best proportions, but the lunging/running pose definitely isn't to everyone's taste. It's very likely that legionaries wore the plume on top of their helmet in combat, and Old Glory is the only one to include this detail. The shield boss is a little odd, and it's a shame that LBM doesn't make transfers for the Old Glory figures. I picked the best of the Old Glory poses for these side-by-side shots. Of the other four poses, one is unusable because of its huge stride (I just can't get it to fit in 20mm depth), and the other three look especially ungainly. I'd love to see Old Glory issue a second edition of its Marian legionaries.
I still haven't found the perfect Marian legionary line. Until Mark Sims decides to sculpt some of Caesar's boys, the Gripping Beast comes closest to the ideal.
Posted by Scott MacPhee at 7:51 PM