Next off the painting bench is a unit of Gallic cavalry for my Field of Glory Carthaginian army. These gauls come from Old Glory packs CGW-10 "Gallic Medium and Light Cavalry" and CGW-08 "Gallic Cavalry Command." The figures are based on 60mm square Litko bases. I used Noch ballast brown for the ground cover, Woodland Scenics medium talus for the rocks, and Silflor prairie tufts for the grass. The shields are all Little Big Men Studios tranfers. The spears are from True North. 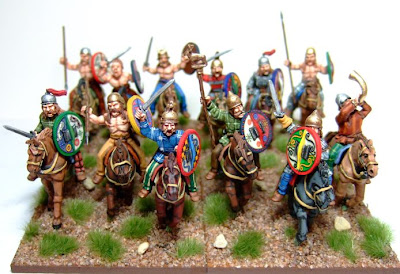 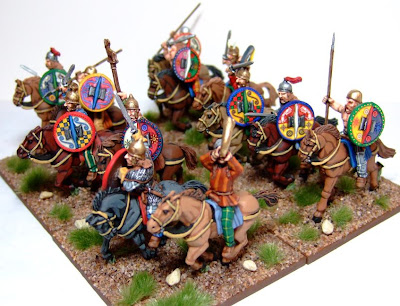 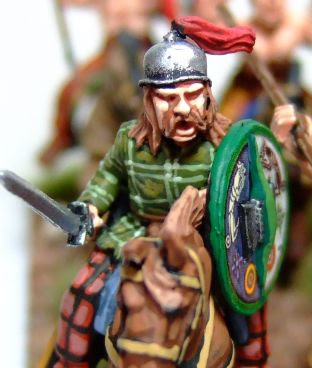 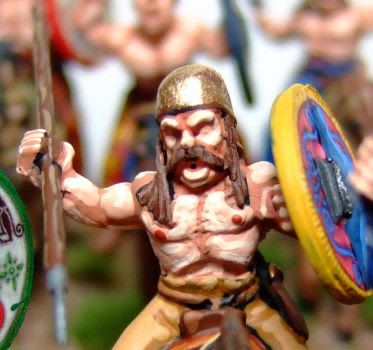 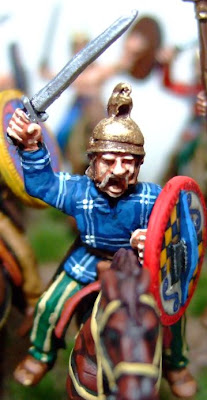 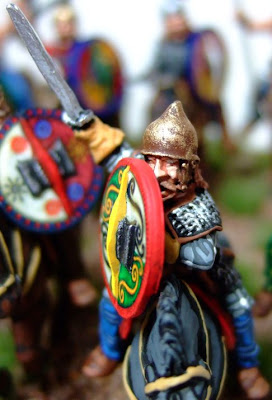 The Old Glory figures are full of character and motion. They really do give the impression of a reckless Gallic cavalry charge.
Gauls should be one of the more colorful units in any ancient army, and I took my time on the clothing, giving most figures a distinctive checkered tartan pattern, colorful stripes, or both. I also painted my shield rims and spines in very bright hues to add to the brightness of the unit.
My first two 28mm armies were WAB Romans and Britons, straight out of the WAB rulebook army lists. I painted those in the summer of 2006. I was interested to see just how my painting had progressed after three years of painting 28s, so I dug out the cavalry from that initial army. 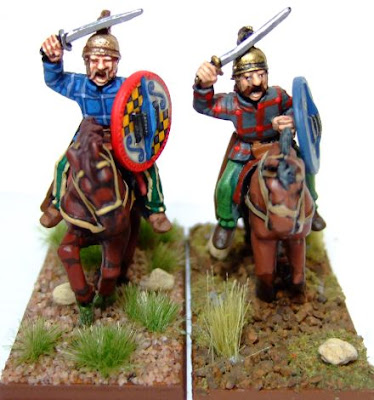 While my painting wasn't really bad three years ago, I think I've gotten much better since then. I gave up painting eyes very soon after starting 28s, and it was a good call. My flesh painting has really progressed from a flat two tone technique to the much more vibrant three tones I use now. I started using a brown base coat on bronze helmets last year, and the result is a much richer color. I'm cleaner on the tartan pattern, and I use a highlight of the base color, which I didn't do three years ago.
So, along with the elephants I painted last fall, that's two completed units for my FoG army. At this rate, I should be done just about the time the next big ancients ruleset come out.
Posted by Scott MacPhee at 12:18 PM