Last week I picked up an entire Foundry collection on eBay, getting the figures for $1 apiece. The collection was "Macedonian Army," and it contained a variety of different phalangite poses. These are all imperial sculpts, and they have the outlandish plumes and extra armor that I associate with the wars of the successors, but I'll definitely use them in my Alexandrian army. Two of the packs -- "eastern pikemen" and "Greek mercenaries" are unlikely to find a home in my early Macedonian army, but the rest should work very well.
One nice thing about buying these on eBay was that the older packs contained 12 figures each, instead of the 8 in the current packs. The figures all had their shields cast onto their bodies, which definitely made it harder to paint the recesses behind the shield. But it did save a few steps in priming, painting, and attaching the shields.
I wanted to see how quickly I could produce well painted Macedonians, so I actually timed myself while painting these 24 figures. I thought I could crank out passable paint jobs for the whole lot in just two hours, then throw them up on eBay at about $5 a figure. If I could do that, I thought I might paint these for sale, but I fell far short of that goal. I spent an hour prepping these figures, six hours painting them, and another hour basing them. 24 figures in eight hours makes for three figures an hour, which is a respectable pace, but not really fast enough to justify selling them.
In order to get these figures done as quickly as possible, I gave up painting three tone flesh and tunic and settled for two tones. I primed the figures brown rather than black, saving myself a step in applying a brown basecoat for helmets, pikes, sword scabbards, straps, sandals, greaves, and shields. I declined to paint any designs on the linothorax armor, settling for a two tone off-white scheme. 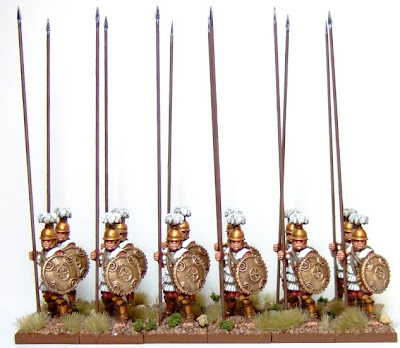 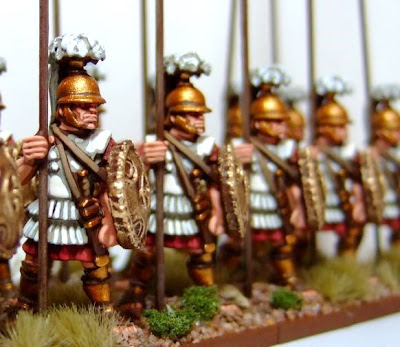 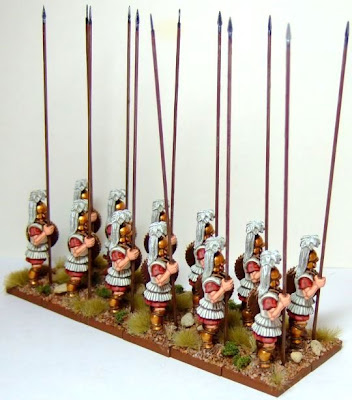 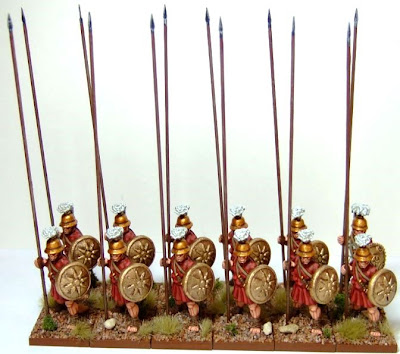 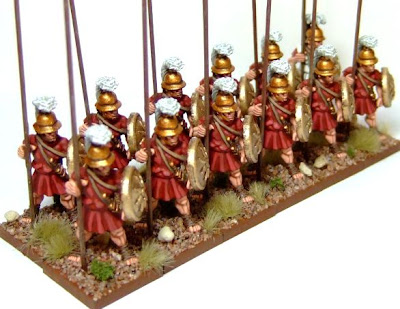 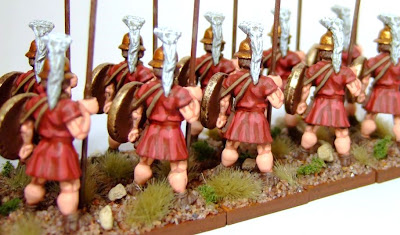 I'll be starting in on some figures for a commission now, and I still have some ACW Confederate command on my workbench, but once those two sets are done, I'll be returning to my Macedonian army. I hope to have the whole thing done in time for a modeling competition in October.
Posted by Scott MacPhee at 10:57 AM