In my last post, I showed the first stick of painted Americans, and I commented on the oddness of the faces. I'm happy to report that the rest of the faces are, at least marginally, better. 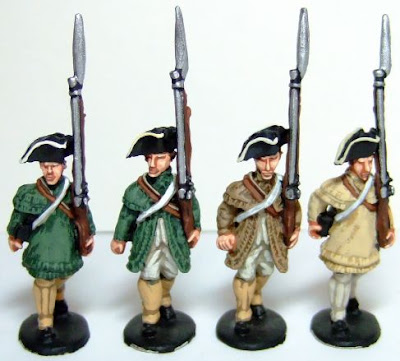 But as you can see, they're still not really good faces. For $.60 each, they're pretty good figures. But they're far short of the Perry figures I have my eye on.
So how would a regiment of these figures look on the table? I'm not going to base them yet, as I plan to mix these men in hunting shirts into units with men in coats, but here are the 20 figures arrayed as a regiment. 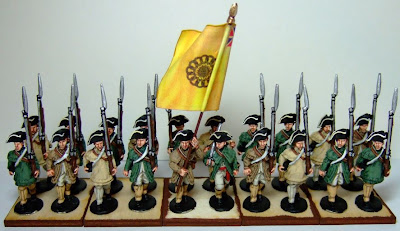 I'd say they look the part. I'm building the American army at Freeman's Farm, which is a medium sized battle. I'll probably still use Perry for that army, but I'll certainly use some Old Glory figures to add onto that force for larger fights. They do look good all ranked up, and by mixing their four codes, I'll be able to produce suitably ragged looking units.

Posted by Scott MacPhee at 8:41 PM