My 2000 point WAB Marian Roman army continues to take shape. Over the past couple of weeks I've finished the last of the Roman infantry and now have a full six units of legionaries. Each unit has a centurion, a signifer, a cornicen, and 17 legionaries. I also painted an extra signifer as the army standard bearer, so there are 121 figures in these shots. I did paint up generals for the army (including Old Glory's Julius Caesar!), but I'm waiting on a shipment of flock from England before I can finish them.

All six units (click on pictures for larger images) 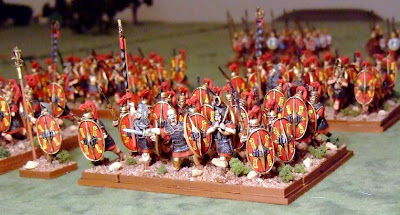 Close up of army standard bearer and one unit

All the figures all Old Glory, and all the shields are hand painted. Now it's time to start working on the cavalry and skirmishers. I'm going to field 20 Old Glory Numidian cavalry, 10 1st Corps German heavy cavalry, and 16 Crusader penal legionaries as skirmishers.

Because Roman armies fought in so many different theaters between Marius and Augustus, I'll probably never finish adding auxilia, but at least the core heavy infantry are finished.
Posted by Scott MacPhee at 9:31 PM