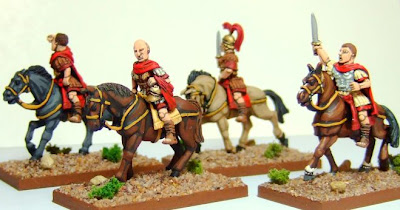 Mounted Officers
The seller claimed the package I bought was complete, but it had been opened, and it was missing one of the figures pictured here. The mounted figures are wearing breastplates with fringed leather armor. I painted them pretty simply.

Unlike Greek and Macedonian generals, Roman generals did not fight in the front rank of their armies, but they did stay pretty close to the front lines. I'm sure that in battle they actually wore helmets, but it seems to be a wargaming convention that Roman generals fight bare headed.

Or maybe it's just to better depict personalities, since helmeted generals would be hard to recognize. I think I can identify some of these figures from Roman sculpture. From left to right I believe we have Titus Labienus, Julius Caesar, a centurion, and Mark Anthony, but I could be wrong. 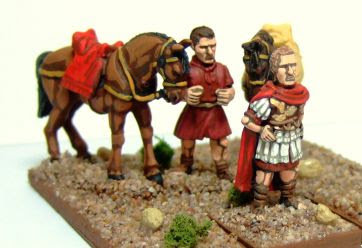 Dismounted general with aide
The pack includes a pretty nice dismounted officer, complete with horse holder and mounts. My friends Austin thinks that this is Caesar. I think it's the mounted bald guy. No matter. I painted them both the same so I can have Caesar mounted or on foot. I guess his hairline recedes when he gets on a horse.

I wanted Caesar to be able to join a cohort, so I based the foot general on a 20mm square base, cutting a slot so he can fit in the vignette.

Complete pack
Here they are: the figures that will command my Marian legions.
Posted by Scott MacPhee at 9:46 PM