Old Glory's Numidian cavalry have a bad reputation. They were released along with the Cretan archers and Balearic slingers in 1998 (edit whoops--not true of these figures. See last paragraph), and those figures are so very ugly that I won't paint any again. The Numidians clearly have the same sculptor, and some of the flaws of the two foot sets are on display here; the arms and legs look like sausages, and the faces are scrunched. Still, I'll gladly field these Numidians in my army, and I may even paint some more.

Group shot (click on any picture for a larger image)
I painted 18 of the Numidians in three days, which is pretty fast for me. The figures are wearing just a simple tunic, which made it an easy job. I decided against using the Old Glory javelins because the cast heads are just too big for the model scale. Instead I used simple brass rod. I didn't bother hammering it out to a point. I drilled out the shield hands so that each figure holds two javelins. The Numidians didn't close to sword fighting range (and these figures don't even have swords), so I figured each man would have a good supply of javelins.

Numidian cavalry, side view
I purposefully kept the horses very plain looking so they wouldn't visually overpower the riders. I went with a variety of browns and bays with one grey. In this side view you can really see the strange musculature on the men, but you can also see just how well these horses are sculpted. The second horse from the left (front row) is the pose with the halter.

You can also see where I spent most of my painting time and energy: the shields. Most of my sources said that the Numidians probably just stretched cow hide over a wood frame and called it good, but I figure that most warriors would have decorated their shields in some way. The shields really make these figures pop on the table. 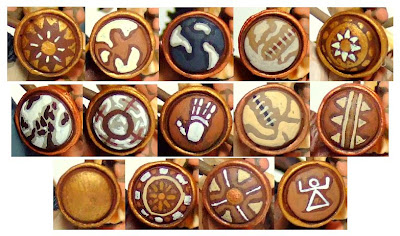 Shield designs, detail
I hand painted all the shields, using the excellent Little Big Men transfers for inspiration. They really are the best transfers available, and I'm planning on using them when I start my Crusader Miniatures hoplite army. Unfortunately, they don't make many transfers for Old Glory figures, so I paint the shields myself out of necessity. I used two different colors of bronze (one from Delta, one from Apple Barrel) on the shield rims. Many of the shields just got a drybrush of bronze across the face, as in the first shield on the bottom row. About half of the rest got a geometric design, and the other have got something cow-like.

Many gamers paint their Numdians as black Africans, I guess because they confuse "Numidians" with "Nubians." I'm not convinced that ancient Nubians would have been black, but the Numidians certainly were not. They were the ancestors of the Berbers, and so would have looked more like Arabs than black Africans. I painted these figures in exactly the same tones I used for my Carthaginian African spearmen, using dark flesh highlights over my custom mixed flesh base.

Numidian cavalry may not look very fearsome, but they are extremely useful for an ancients gamer. They fought with Hannibal against Rome, they fought with Scipio against Carthage, and they fought on their own against both Carthage and Rome. Roman armies of the 1st and 2nd centuries BC frequently used Numidian cavalry in their campaigns; the Romans prized light cavalry above all others, and Numidian cavalry is about as light as they come. For now, these figures are going in my Marian Roman army, but I'll certainly use them for Punic Wars battles as well.

All told, I like these figures. They're not as nice as most of Old Glory's cavalry, but they are servicable, and of course the price is right (these cost $1.80 apiece with my Old Glory Army discount). If you would like to try them, look in the "Caesar's Gallic War" range. For some reason, Old Glory put them there instead of with the Carthaginians, even though they formed the bulk of Hannibal's cavalry.

Edit: Allen Curtis writes on TMP that these are not the figures from the Gallic War range, but instead are the "auxiliary light cavalry" from the Imperial Roman range. I definitely ordered the Gallic War figures, but maybe Old Glory realizes what a bad reputation those have and so substitutes these figures instead.
Posted by Scott MacPhee at 3:33 PM