Edit, 10/12: These figures won a gold ribbon at my local IMPS show.

I'm going to sell these off, but first I wanted to get some shots on the blog. These are Foundry Hypaspists from pack WG 9/5 "Hypaspists Attacking" with command from WG 9/1 "Macedonian Command." I used Delta Ceramcoats. The spears are from North Star, and the bases are Litko.

As always, you can click on the pictures to get larger images. I tried to get some really good close ups on these figures, so you'll see them with warts and all, but keep in mind that these figures are only 1.25 inches tall! 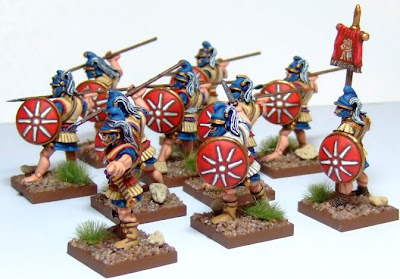 Group shot showing off the hand painted shields
I wanted a uniformed look to my troops, so I followed a regular painting scheme. All figures got blue tunics and helmets, all the linothorax armor is "maple sugar tan" except for one officer (I figure the officers would be likely to provide their own armor), and all the shields are the same. 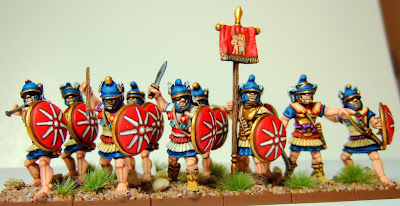 Front view
I'm skeptical that Macedonian troops were really so brightly colored, but hey . . . it's the wargaming convention, and it does make the unit visually interesting. 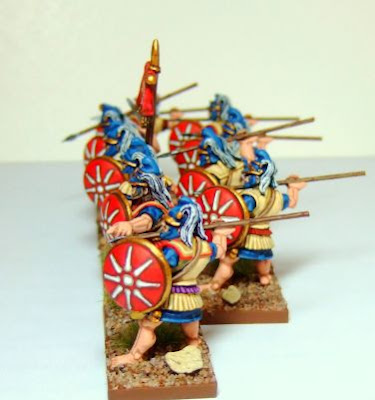 Side view
The linothorax skirts got some variations in color. Some I did in red, some in purple. I painted edging on the shoulders of some soldiers. 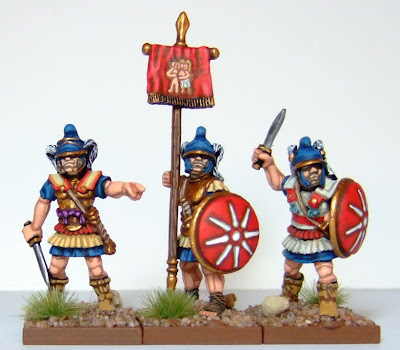 Command group, front
The command figures are beautiful, but a real challenge to do well. I based the unit's standard on the painted example on Foundry's website. 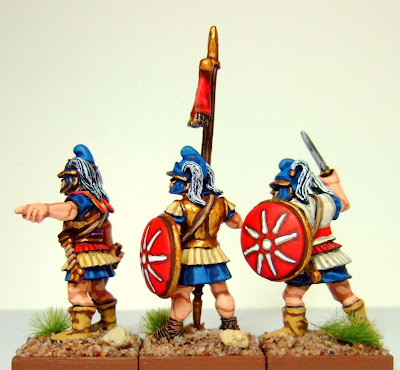 Command group, side
Those breastplates require a careful touch, but they look awfully good once done. Both officers wear boots rather than sandals. 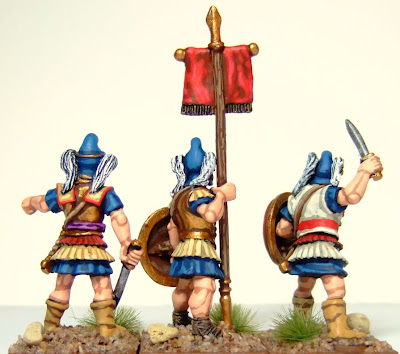 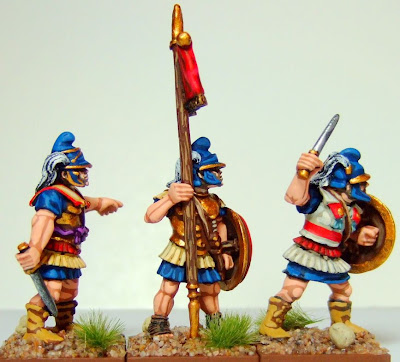 Standard bearer
The standard pole got a wood grain treatment, but on the raw lead it's completely smooth. 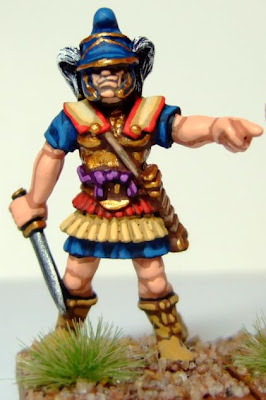 I used two different shades for my flesh base tone. The arms and legs got Delta's "dark flesh," but the faces got a slightly darker tone that I blend myself from dark brown, territorial brown, and medium flesh. 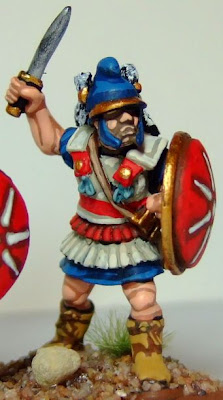 Junior officer
This is the one set of linothorax armor that got a lighter shade, "lichen grey."

Hypaspists, front
Each hypaspist has a different head, but there are only two basic poses. Of the seven figures in the pack (and yes, this pack had seven figures rather than eight), I got five of one pose and two of the other.

Hypaspists, rear
The shields ensure that the figures look very striking from the front. I think the colorful armor makes them equally interesting from the rear.

Hypaspists, side
Here you can really see the variation I did within the limits of the overall color scheme. Everyone has the same basic color of leather, the tunics and helemts are the same, and the shields are identical. But I was able to add enough various touches to armor and helmet to make each figure an individual. 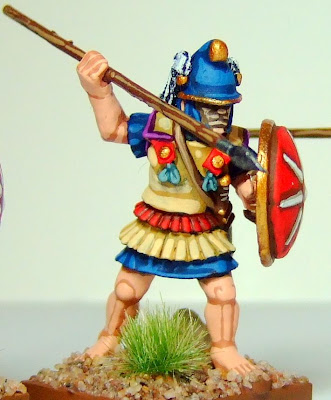 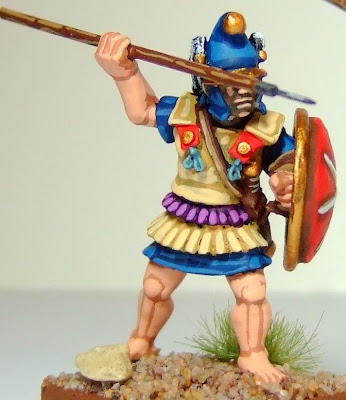 These were a lot of fun to paint, but they took a looong time. I've been spoiled by painting all those Romans. I can crank out a hundred Romans in a few days. These 10 figures took me a week!
Posted by Scott MacPhee at 10:59 AM