I'm nearly done with my WAB Marian Roman army. One of the last units I'm fielding is a unit of 10 German cavalry. Caesar used German cavalry throughout his campaigns in Gaul, most famously at Alesia, where his German cavalry reserve rescued his main cavalry force from a near defeat.

My friend Jon is building an ancient German army using 1st Corps figures. I was impressed with their line and decided to give their German cavalry a try. With the exchange rate, these ended up costing me $3.52 apiece, just a little less than twice what I pay for Old Glory cavalry.

All 10 German Cavalry (click on any picture for a larger image)
And here they are. My sources state that the Germans wore very simple clothes, mostly undyed wools. I did add a little color, figuring that the Germans would have had natural dyes to produce a dusty red, dark blue, and vegetable green. Tactitus writes that the German shields were unpainted, but I'm very skeptical of that. Tacitus liked to portray the Germans as the prototypical noble savages, uncorrupted by modern luxury, and I feel pretty sure that his "unpainted shields" remark fits this literary conceit more than any actual fact. Comparative anthropology is my guide here; I can't think of any well documented tribal warriors who don't decorate their shields. Even the stone age warriors of pre-Columbian America had highly decorated shields. Still, in a nod to Tacitus, I didn't paint any ornate designs on these shields.

Four rider poses, two horse poses
The 1st Corps figures come in four variants, each with the characteristic top knot. I don't know if it's the type of metal 1st Corps uses or my old bottle of super glue, but I had a heck of a time gluing the spears into the open hands and getting the riders to set on the horses.

Because these Germans are in Roman service, I painted their cloaks in the characteristic mustard brown of the Roman military. That was my only nod to military formality. Other than their uniform cloaks, these Germans have a very motley appearance. 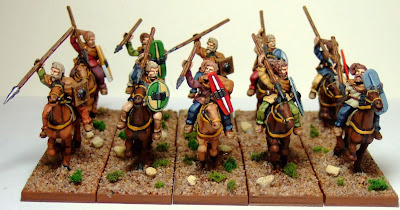 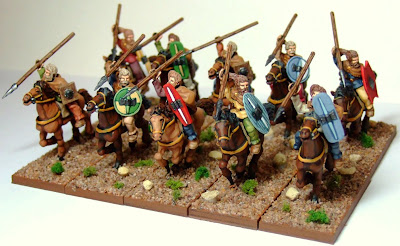 WAB Unit
I'm very happy with the 1st Corps figures, and I will definitely buy from them again. I'm just waiting on an Old Glory order to arrive before I finish the last piece of my WAB Marian Roman army. Once my Crusader Punic Wars Roman penal legionaries arrive, I'll be able to paint a couple units of Romanized Gallic skirmishers, and Caesar's army will be complete.
Posted by Scott MacPhee at 8:44 PM