Readers of this blog will remember that I bought five Old Glory 15mm Field of Glory armies last month. Since they arrived, they're all I've painted. This is the second army I've finished, the Roman army of the Second Punic War. Now I have a matched set of painted armies, and I can fight out Hannibal's battles in Italy.

I painted my Romans to look very uniform. Each unit has a distinct color scheme, and each figure in the unit matches that scheme. The only exception are the Italian allies, who I gave a more motley appearance. Roman skirmishers wear unbleached linen, but the rest of the Romans wear a madder red military tunic. Those Romans who have capes are wearing the mustard brown cloak of the soldier. The generals, of course, get their distinctive red cloaks. I took special care with the shields in this army, trying to capture that Roman look.

Roman Generals
The Field of Glory rules suggest representing generals with cavalry stands, but I rather prefer Old Glory's approach, giving me three foot command and one mounted general per stand. The two stands on the left are my troop commanders, each with a legionary eagle. The stand on the right is my army general. 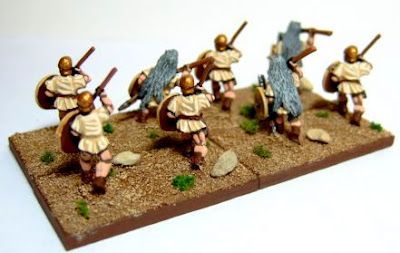 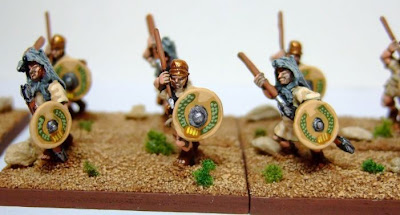 Velites
The Roman starter army has two battlegroups of velites, each of four stands. These can't accomplish much on the battlefield, but they'll look sharp before they die. The velites come equipped with a mix of plain helmet and wolfskin. 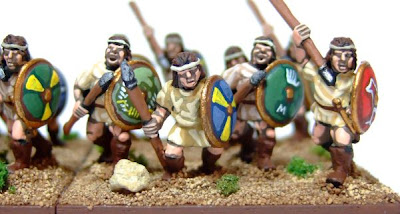 Italian Allies
My Italians got several different shades of unbleached linen tunics. I painted the shields in a wide variety of styles and colors; no two are alike. 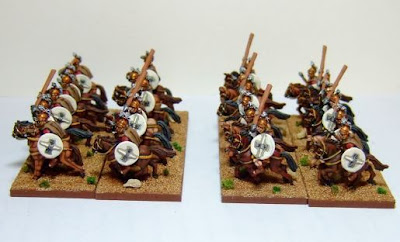 Equites
The Roman cavalry comes in three poses which fit well on the bases. I decided on a plain white shield for these figures, since they already look so striking with their white plumes and mustard brown cloaks.

Hastati
The hastati wear a bronze pectoral and red tunics. These men also get a plain white shield, but their tunics keep the unit looking interesting.

Principes
The principes are very nice figures, and with their eagle shield designs, they have that classic "Roman soldier" look.

Triari
The army's elite infantry, the triari get purple plumes and blue shields. Old Glory includes enough wire for spears. Indeed, they include enough to make these spears half as long again. I cut the spears to an 8' scale height.