Back in the summer of 2005, I painted my first 28mm armies, building the starter EIR and Gallic armies from the WAB main rule book. I had won Merrimack's photo contest and received $150 of merchandise of my choice, so I bought Romans and Gauls and set to work.
I was a little disappointed in the Romans. I've since bought enough Crusader EIR legionaries to build three cohorts (you can see a painted cohort here). But Old Glory's Gauls are first rate. The usual complaints about Old Glory figures (overly animated, weird poses, too much variety) actually work in these figures' favor. You want your Gauls to look like a lunging, ill-disciplined tribal band. 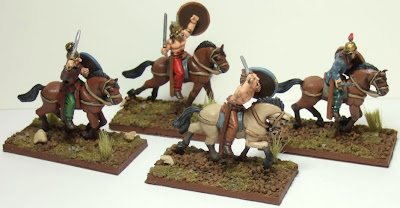 CWG-10 Gallic Medium and Light Cavalry
The cavalry come in five poses. One, not pictured, is holding a spear upright. These are savage looking horsemen, perfect for making a reckless charge. 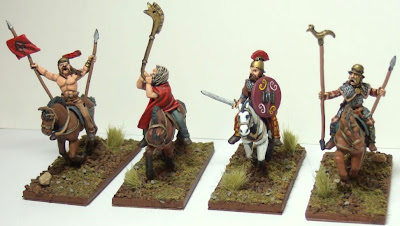 CWG-08 Gallic Cavalry Command
The cavalry command pack contains armored and unarmored men. The fellow on the white horse is my Gallic general. The yelling man on the left is my army standard bearer.

CWG-11 Gallic Slingers
These are probably my least favorite troops from the range. Something about the proportions on the two leftmost figures seems a little off. You can see that I was attempting to paint eyes on my early 28mm figures. I've since abandoned the practice, since it never looks right to me. If the eyes are big enough to see, they're too big for the figure scale. If they're small enough for the figure scale, they're too small to see. 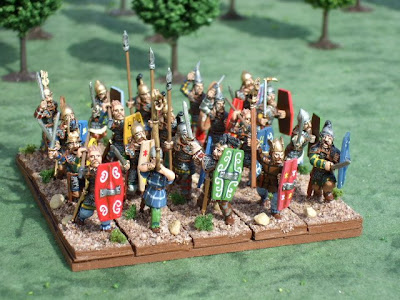 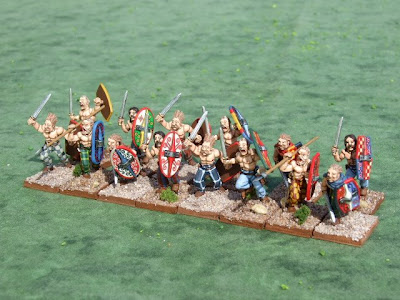 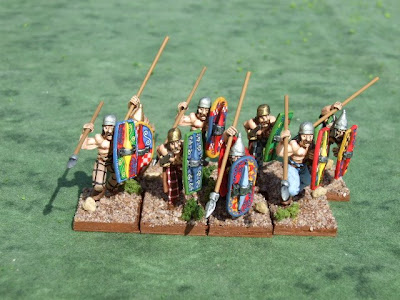 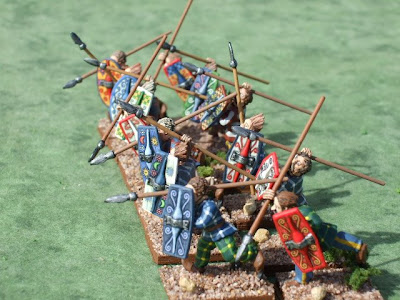 CWG-05 Gauls with tunic, no helmet 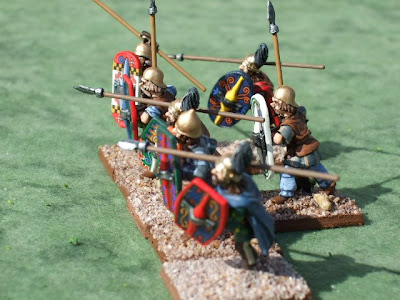 CWG-06 Gauls with helmet and tunic
The infantry really look the part. With Old Glory figures, you can build a shrieking mob of warriors guaranteed to fill the heart of any Roman with fear. I took most of these photos after I bought my first order of Little Big Men shield transfers. Although I've painted almost 150 Gauls, not all of them made it into these pictures.
The Gallic infantry comes in a wide variety of poses. I count 68 different figures in these six packs. Old Glory also offers different Gallic figures in their Carthaginian range, which I haven't painted, but which offer another 45 poses. Add in head variants, and you really can field a large army with very few repeated figures. How many other ranges offer 113 different poses for Gallic infantry?
If I were building a 28mm Gallic army from scratch, I would definitely use North Star spears instead of those Old Glory monstrosities. I would cut them down to javelin length so I could more easily rank up my figures on their movement trays. And I would use LBM transfers on the whole shooting match. But I would still use Old Glory figures. I've been painting 28s for a while now, and I've seen (and even painted) Gauls from other manufacturers' ranges: 1st Corps, Foundry, and Gripping Beast.
The Old Glory Gauls still give the best overall impression of any of them.
Posted by Scott MacPhee at 1:24 PM