I've played enough Field of Glory by now to know that I'll be playing it for a while. Up until now, I've used my Warhammer Ancient Battles 25mm Romans and Carthaginians, which are individually based, and I've glued them to 60mm movement trays. The movement trays are fiddly in action, and they don't really look that good. I've had to make compromises with the basing rather than using the FoG basing conventions.

So I'm building a new republican Roman army from scratch to use with FoG. I know, it seems a little crazy to have the same army in the same scale for two different rules sets, but maybe I am a little crazy.

I already built a unit of Roman cavalry for FoG. Now I've just finished a unit of Italian allies. Most of the allies would have been equipped and organized just like Roman legions, but some contigents would have fought in the old style. FoG classes these as medium infantry, with a 30mm base depth.

I used Old Glory pack PPR-07 "Italian Infantry" for these figures. As you can see here, Old Glory depicts the Italians as skirmishers, using javelins. In that photo you can see five different poses, but only three of those poses would work with my conversion. I cut the javelins off the shield hands of my figures, and I bent the shield arms up and in so the shields would protect the body. Once I had drilled out the hands and glued in some True North spears, I bent the spear hand so the figures would be stabbing to the front. It's a small conversion, but it gave the figures an entirely different look, one more appropriate to the Italians' status as medium spearmen in FoG.

Italian Allies Unit
Here are all six bases of the unit. I painted the figures in a simple undyed tunic, and I did very simple shield designs. I had thought to reproduce the more ornate shields from the Osprey book, but Osprey shows men from an earlier era.

These Litko bases did something I'd never seen them do before now. They actually warped! It might be because of the greater surface area, but even my elephant bases didn't warp. Maybe they had a bad batch of wood or something. 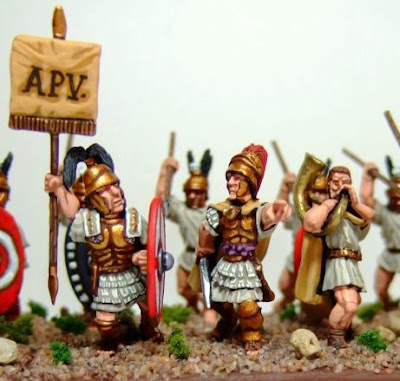 Command
The command figures are from PPR-01 "Command." The standard bearer is a converted officer. He had been holding a sword, which I cut off. I then drilled out his hand and put an inverted North Star spear in it. I drilled out the standard's pole (which was very tricky, since the pole had only a slightly wider diameter than the spear shaft) and glued it to the butt of the spear. The "APV" indicates that these are Apulians.

Pose 1
This was my favorite of the three infantry poses. He obviously means business. 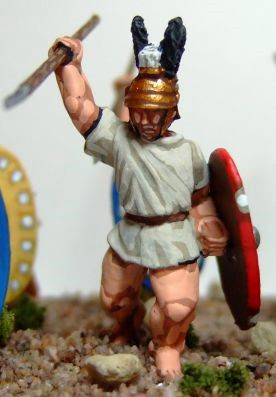 Pose 2
This was my least favorite of the poses, and I used as few of these as I could get away with. This man has an obvious death wish, opening his body like that.

I like this pose, since you can see more of the face.

The Old Glory figures weren't bad. Still, I consider Old Glory's republican Roman line to be one of their best, and these aren't as good as the rest. It took a lot of work to make them look like soldiers. I might have been better off using some Hastati and replacing the pila with spears.
Posted by Scott MacPhee at 11:04 PM