My GMB flags arrived last week, and I was able to finish Poor's brigade. I'll be putting the finished units on the blog over the next week.
Here's the Connecticut militia, 18 figures strong. My painting notes say:
'Probably mostly in hunting frocks, with quite a few men in red faced brown coats capture from the British brig "Thomas." No standard uniforms were settled on until 1886!' 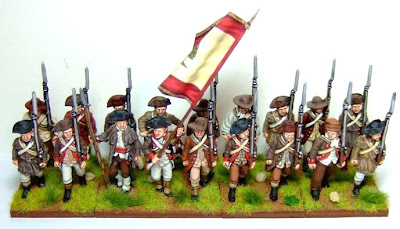 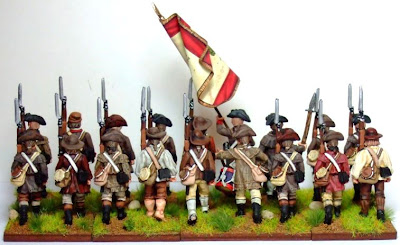 I elected to stick with various shades of brown for this unit. There's actually a lot of variety in color, but by keeping it all within the brown part of the spectrum, I'm able to get the suggestion of uniformity without actually making the figures uniform. The one figure who really stands out is in the maroon hunting frock.
Posted by Scott MacPhee at 7:41 AM